In 2021, as the COVID-19 pandemic continued to disrupt lives and redefine "normal," Caltech's resilient community of insightful and dedicated researchers, scholars, students, and staff continued to push boundaries, shift paradigms, and invent the technologies that will improve our ever-changing world. Here are some highlights.

In January, researchers developed a cage-like vaccine platform called a mosaic nanoparticle that could help protect against multiple strains of coronavirus; obtained new insights into human decision-making using AI-trained networks playing video games; learned how tiny plants changed the planet nearly half a billion years ago; and studied chaotic systems using a camera that can take up to 70 trillion frames per second.

Meanwhile, the Institute announced that it would remove the names of known eugenics proponents from its buildings, honors, and assets. 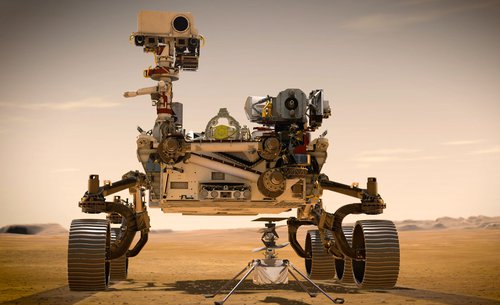 The Perseverance rover and the Ingenuity helicopter (foreground) as they might appear on Mars. Credit: NASA/JPL-Caltech
Image Lightbox 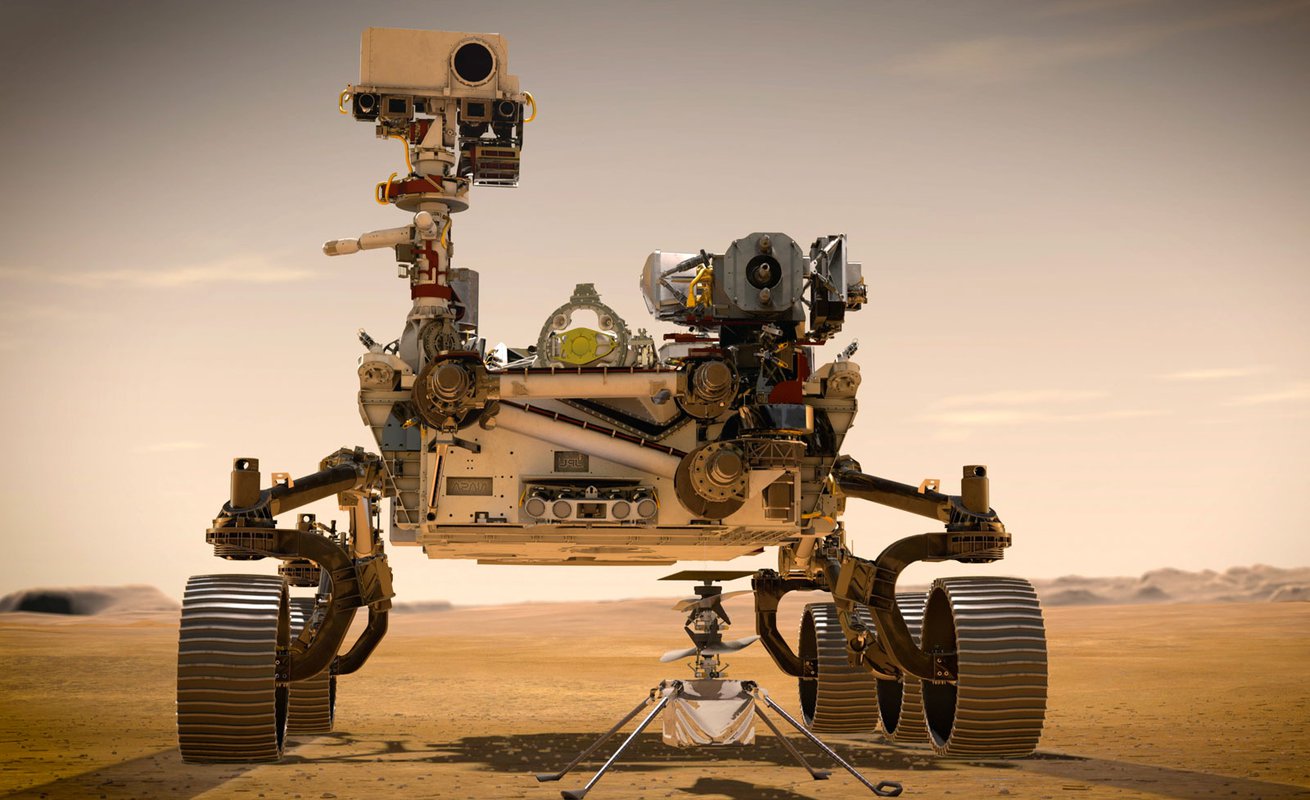 The Perseverance rover and the Ingenuity helicopter (foreground) as they might appear on Mars.
Credit: NASA/JPL-Caltech
Download Full Image

February saw the historic landing of NASA's Mars rover Perseverance on the Red Planet. The 2,263-pound rover, designed and operated by JPL, which Caltech manages for NASA, will spend two years investigating Mars's Jezero crater, and will collect and cache samples of rocks and sediment for recovery by a subsequent mission.

Here on Earth, seismologists worked with optics experts to develop a method to use existing underwater telecommunication cables to detect earthquakes; physicists advanced the use of exotic materials for future ultrafast computers; and engineers perfected methods to place molecules in particular orientations at specific locations—work that paves the way for the integration of molecules with computer chips.

In March, Caltech researchers announced a non-invasive method that uses ultrasound to read and interpret brain activity related to the intent to move, a major step toward the creation of noninvasive brain–machine implants that can restore movement to paralyzed individuals; located Mars's missing water; described a long-sought solution to "one of the most stubborn problems in math"; and explained how bacteria evolve resistance to antibiotics and how antibiotics help bacteria eat when nutrients are scarce. 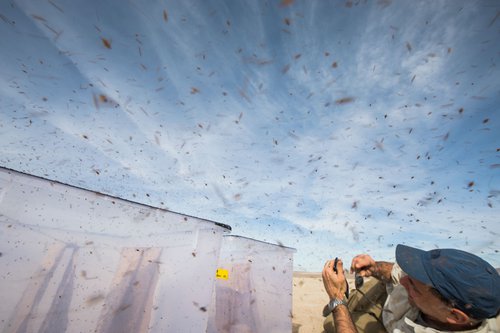 Michael Dickinson ducks out of the way after releasing buckets containing thousands of fruit flies on a dry lakebed in the Mojave Desert. Credit: F. van Breugel
Image Lightbox 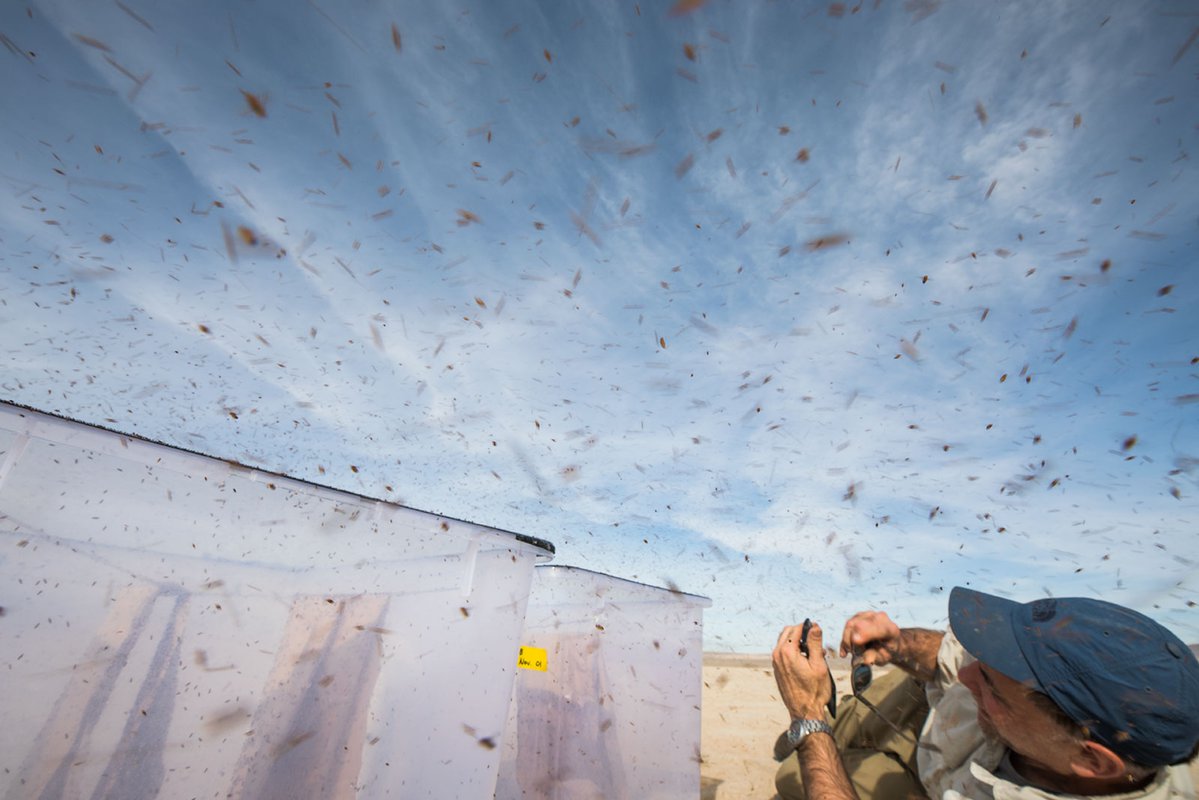 Michael Dickinson ducks out of the way after releasing buckets containing thousands of fruit flies on a dry lakebed in the Mojave Desert.
Credit: F. van Breugel
Download Full Image

In April, Caltech biologists revealed that tiny fruit flies can forage across extreme distances (as much as 6 million times their body length), and astronomers described a network of small telescopes that promises unprecedented new views on the dynamic infrared sky. Additionally, in honor of Earth Month, the Caltech Science Exchange launched a new section on Sustainability.

With COVID infection cases on the decline, the Institute announced the beginning of a gradual return to on-campus operations, and plans for a limited in-person commencement celebration to be held in June. 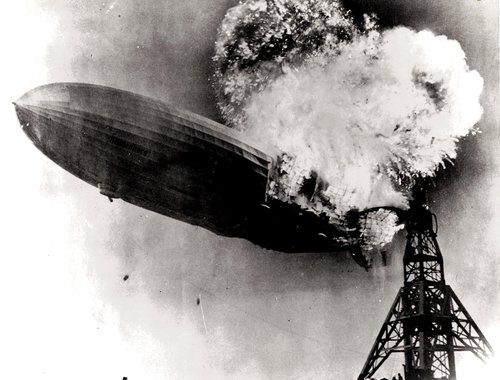 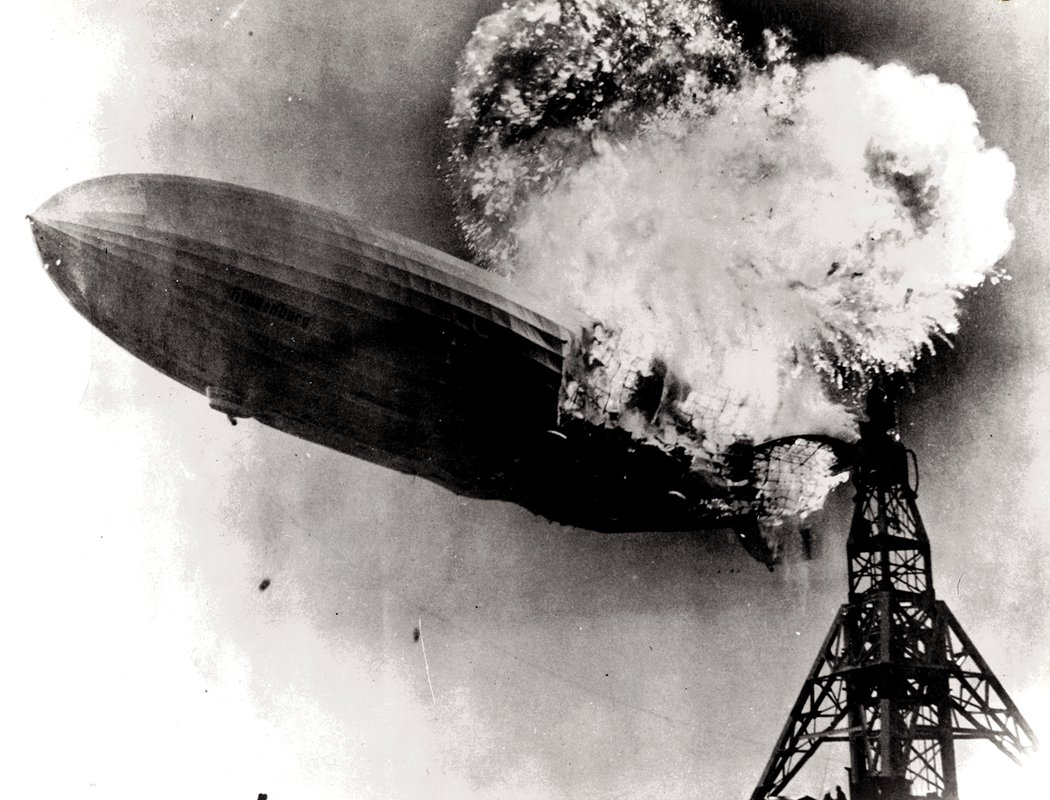 In May, Caltech scientists offered a new answer to a long-standing historic mystery—the cause of the 1937 Hindenberg disaster—and revealed a novel bioinspired, water-harvesting material that could help solve one of humanity's biggest challenges: water scarcity.

In June, Caltech held the second virtual commencement ceremony in the Institute's history, and welcomed students back to campus for summer research projects. Research discoveries continued, with scientists describing new techniques to break up gall and kidney stones with sound and improvements to the gene-editing technique CRISPR, and a method to record brain activity with laser light. Elsewhere, researchers identified a neural link between gut bacteria and social behavior, showed how computers can be trained to predict art preferences, and discovered the smallest known white dwarf. 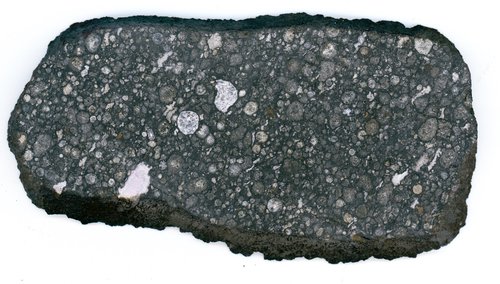 A slice of the Allende meteorite, which contains a type of stellar dust never seen before.
Image Lightbox 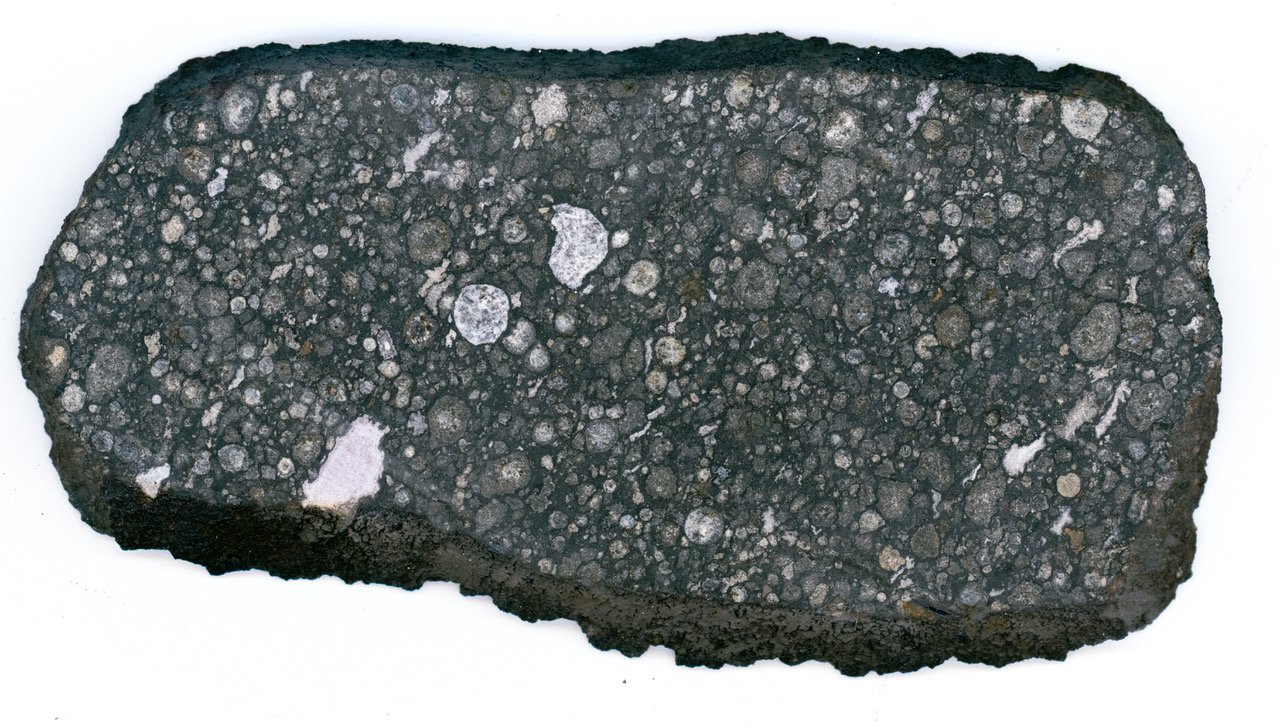 A slice of the Allende meteorite, which contains a type of stellar dust never seen before.
Download Full Image

In July, the Einstein Papers Project at Caltech released the 16th volume of its massive scholarly collection of Albert Einstein's scientific and nonscientific writings and correspondence. Meanwhile, Caltech cosmochemists announced "star" news of a different kind: the discovery of a previously unknown type of stellar dust that could offer insight into the history of water on Earth.

August was marked by the announcement of a $100-million gift to Caltech to fund the Space-Based Solar Power Project. It also featured a flurry of other advancements and discoveries, including a new method to see cells with sound, the most-detailed temperature map ever obtained of an asteroid, evidence that Saturn has a sloshing core and that mice learn faster than previously thought, and the creation of a material inspired by chain metal that transforms from flexible to rigid on command. 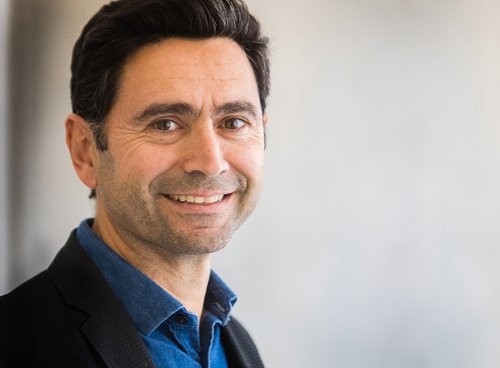 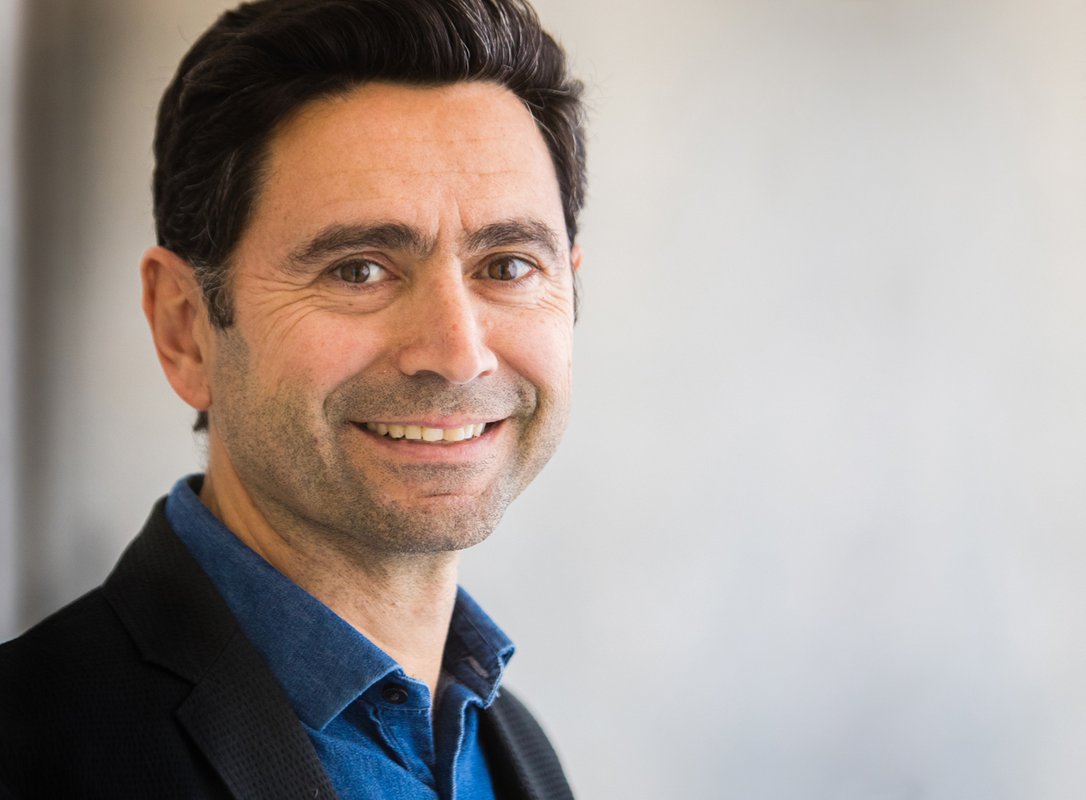 In September, students returned to campus for the first time in over a year for in-person learning. Meanwhile, Caltech biologists described the development of embryo-like structures from human stem cells—work that may lead to breakthroughs in the understanding of early embryonic development—and LIGO scientists and engineers described a new coating for the mirrors of the gravitational-wave detecting instruments that expands their reach into the cosmos, speeding the detection of gravitational waves.

October was highlighted by the announcement of the completion of the Institute's $3.4 billion Break Through campaign, which exceeded its initial fundraising goal by $1.4 billion, and the opening of the AWS Center for Quantum Computing. The goal of the center, a partnership between Caltech and Amazon Web Services, is to create quantum computers and related technologies that have the potential to revolutionize data security, machine learning, medicine development, sustainability practices, and more.

In other news, Caltech alumnus Ardem Patapoutian (PhD '96) was awarded the 2021 Nobel Prize in Physiology or Medicine for his discovery of cellular sensors in the skin and internal organs that respond to mechanical stimuli such as touch; Caltech engineers announced a new method to control light that could revolutionize telecommunications, and revealed LEONARDO, a flying/hopping/slackline walking/skateboard-riding bipedal robot; and physicists offered insight into the lifetime of a neutron. 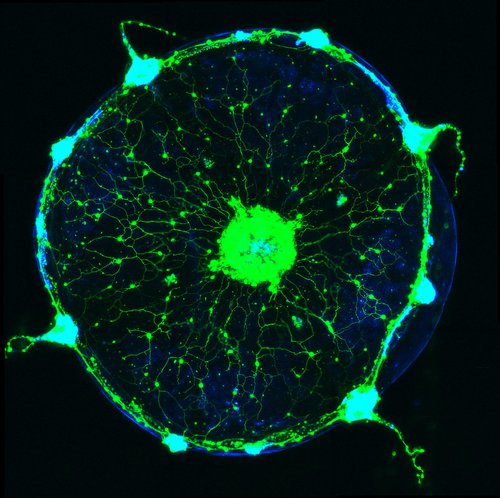 A jellyfish with a subset of its neurons labeled with green fluorescence. This particular subset is involved in the folding behavior that jellyfish initiate in order to bring food from their tentacles to their mouths. Credit: B. Weissbourd
Image Lightbox 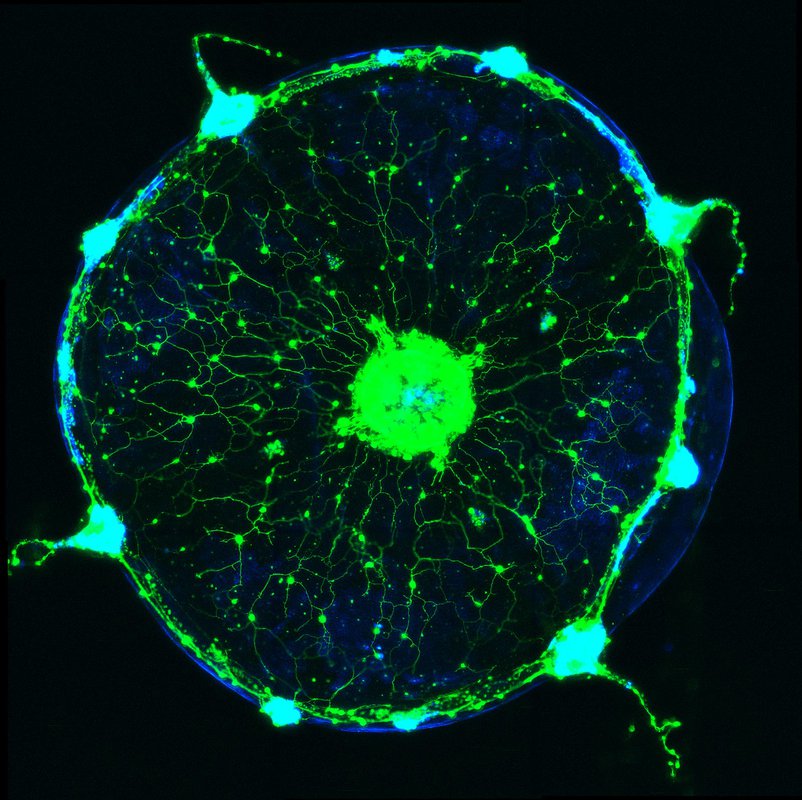 A jellyfish with a subset of its neurons labeled with green fluorescence. This particular subset is involved in the folding behavior that jellyfish initiate in order to bring food from their tentacles to their mouths.
Credit: B. Weissbourd
Download Full Image

In November, the Institute announced the formation of a new suite of early-career professorships, the Hurt Scholars. Biologists described a new tool for understanding the organization of the genetic material of cells, and unveiled a transgenic jellyfish that can reveal how jellies "think" and help to answer fundamental questions about the neuroscience of behavior across species.

In campus news, new names for campus assets and honors were approved and announced in furtherance of the Institute's renaming process. 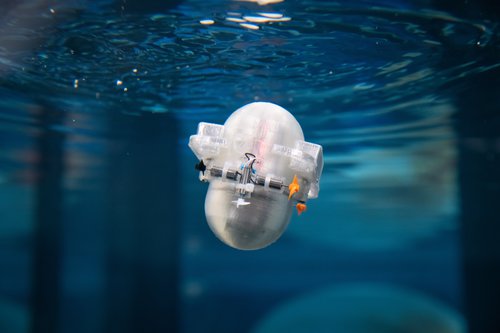 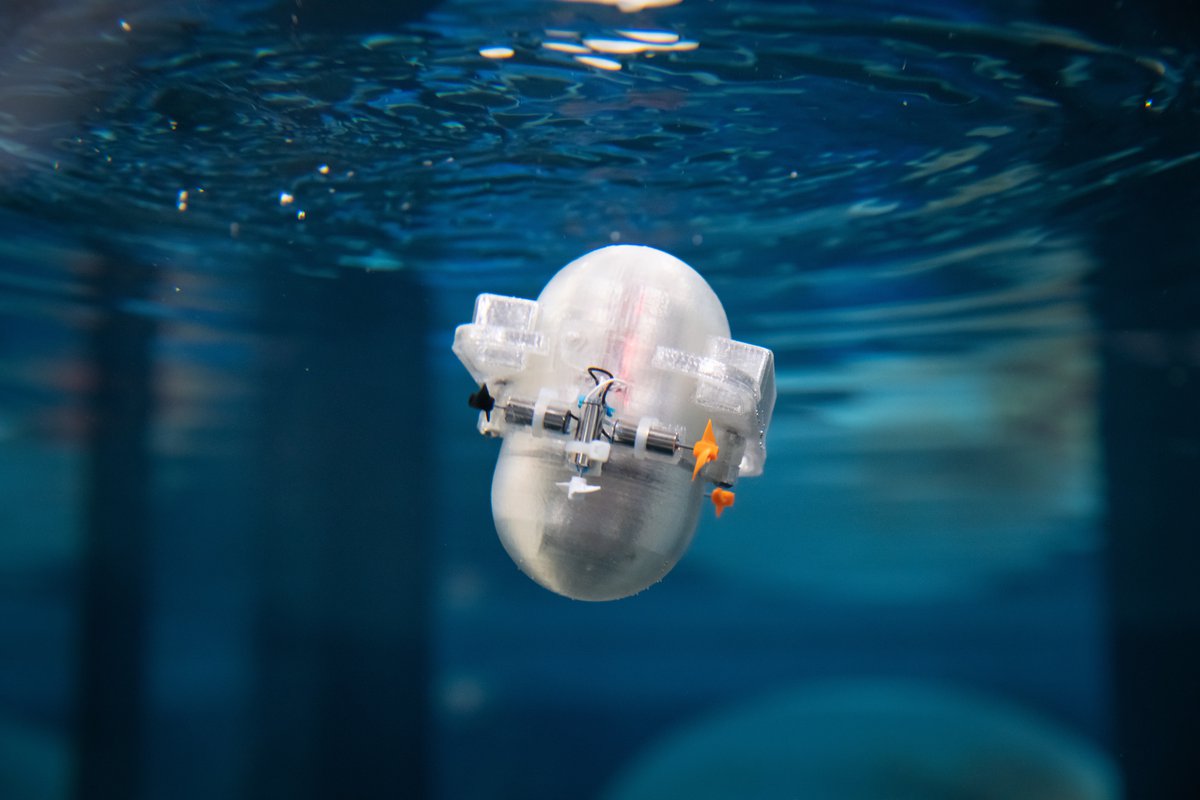 In December, Caltech researchers described the development of an AI system that will allow autonomous drones to use ocean currents to aid their navigation; developed a method to coax jellyfish, fruit flies, and mice to regenerate amputated body parts; showed how new organs evolve in beetles; and probed the biology of how we judge faces .

In addition, the Tianqiao and Chrissy Chen Institute for Neuroscience at Caltech celebrated its five-year anniversary with the announcement of a new center in data science and artificial intelligence, and Caltech announced the funding of new laboratories that integrate gravitational-wave science and quantum precision measurement.