On Friday, June 11, 2021, Caltech held its 127th Commencement in an event that was held virtually because of the COVID-19 pandemic but featured a small on-campus livestream event for vaccinated graduates that allowed graduating students to watch the virtual Commencement together. The Institute honored graduates with 476 degrees: 227 bachelor's degrees, 104 master's degrees, 145 doctoral degrees; and celebrated 50 additional graduates whose advanced degrees (12 master's and 38 doctoral) were awarded by the Board of Trustees in October 2020.

Caltech president Thomas F. Rosenbaum opened the ceremony, noting that the graduating class had endured more than a year of learning under pandemic conditions. "You bore disruption and grief with resilience and grace. With your faculty mentors and fellow scholars, you have managed to stay connected and to open new connections, forging new pathways to learning," he said.

David Lee (PhD '74), chair of the Caltech Board of Trustees, offered his congratulations. Lee noted the highlights of an eventful year, including the landing of the Mars 2020 mission and the opening of the Tianqiao and Chrissy Chen Neuroscience Research Building on campus. He also noted that the Institute's reflection on its past has led to the decision to rename some campus buildings. "This is an important step toward realizing Caltech's aspiration to become a community in which talented individuals from all backgrounds may strive to their full potential and contribute to the Institute's mission of research and education," he said. 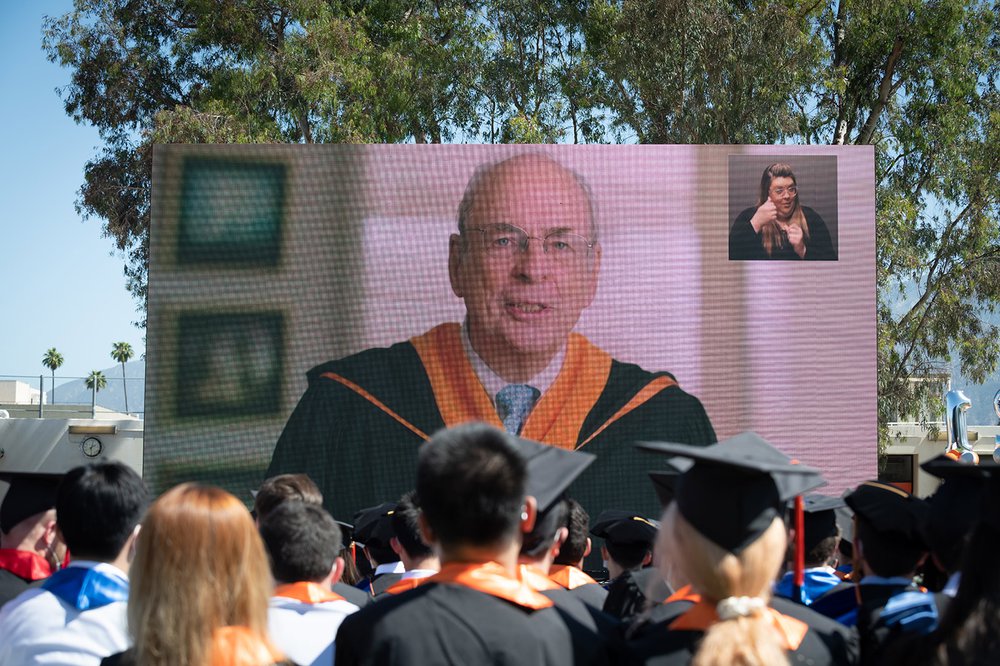 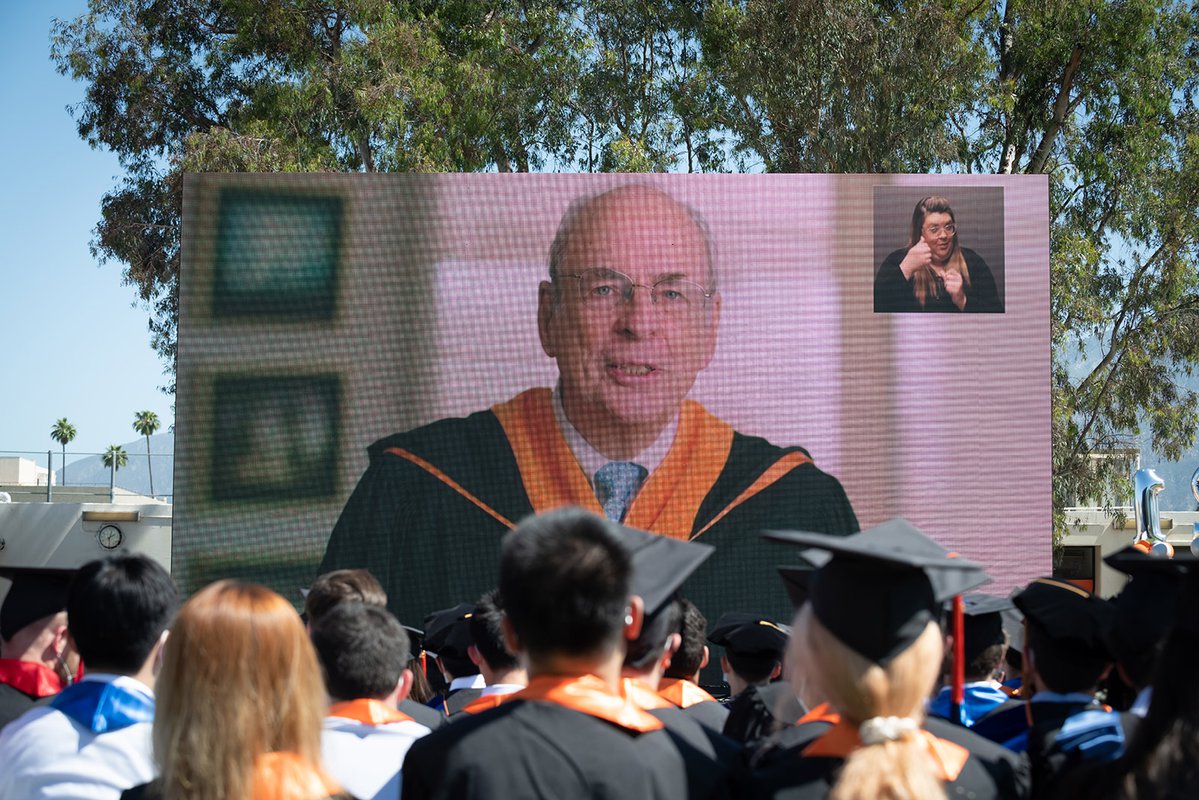 The keynote speaker was Norman R. Augustine, a longtime leader in the aerospace industry and former head of Lockheed Martin. Speaking to the class of 2021 on the theme of "resilience," Augustine acknowledged the odd circumstances of this ceremony. "You will always receive special attention as a member of the class of 2021 that earned its degrees under the extraordinarily trying circumstances that surround a pandemic," he said. "Few classes before you have been called upon to summon the endurance, resilience, and grit that you have exhibited."

Augustine further praised the potential for science and technology to confront the great challenges of the 21st century. "It is the strength of America's economy that will fund our efforts to confront climate change; deteriorating infrastructure; diseases; and the chasms that exist in opportunity among peoples. You will be at the leading edge of such conquests," he said.

A group of alumni speakers followed with their thoughts on resilience for the graduating class. Tara Gomez-Hampton (PhD '11), associate director of medical affairs at Biosense Webster, Inc., advised the class that "the problems you learned to solve here will transfer. There will be skills that you've gained right here at Caltech; when you apply them to these new situations, you will come out on top."

Morgan L. Cable (PhD '10), Astrobiology and Ocean Worlds Group supervisor at the Jet Propulsion Laboratory, which Caltech manages for NASA, advised graduates that their Caltech education has provided a toolkit with which to make positive change in the world. "This year has been an incredible one. The biggest thing that I have taken from this is that the world is capable of change—dramatic change—and that we all can be a part of that," she said.

Christopher Blaszczak-Boxe (MS '01, '02, PhD '05), associate research professor, Department of Geosciences; associate, Earth & Environmental Science Institute + Institute for Computational & Data Sciences; and co-director of PSU EnvironMentors at Penn State University echoed that idea. "Although the future for some of you has some degree of uncertainty, … one thing is guaranteed: your professional training will reap high returns on your investment," he said. 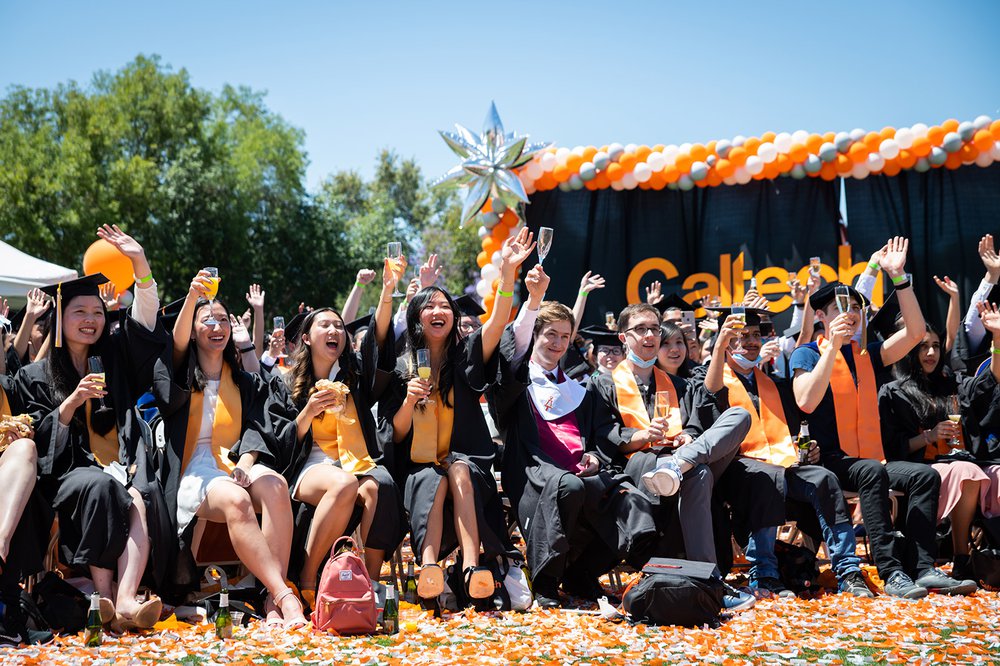 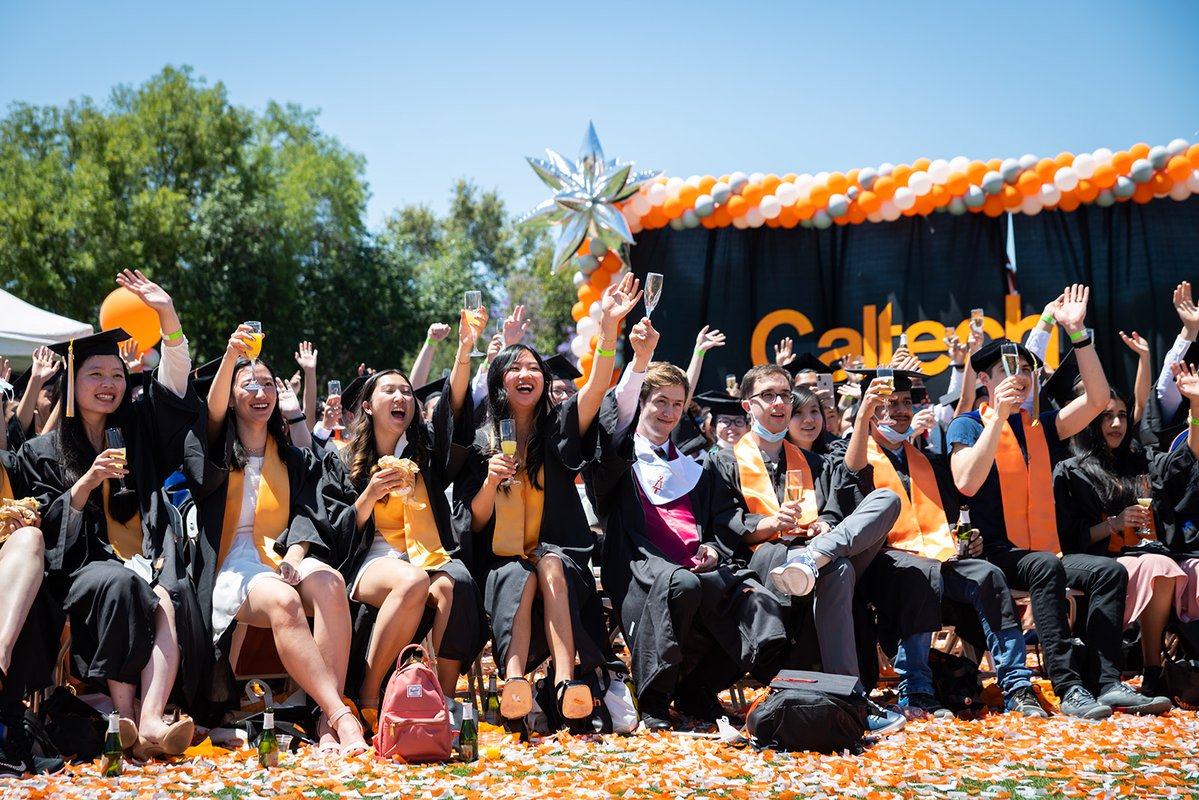 Maryam Ali (BS '05), a medical writer at Medtronic Neurovascular, reflected on the inability to know everything. She was dissatisfied with her attempts to learn differential equations during her time at Caltech, so, after graduation, she carried her textbooks around the world for years in order to learn the equations "properly." After more than a decade, she finally knew she had to let them go. "I hope you come to that realization sooner than I did," she advised.

Finally, Mason Smith (BS '09), software developer at TGS Management Company and member of the Caltech Board of Trustees, advised students of the importance of learning from failures and setbacks, not just successes. "I hope you don't just remember the satisfaction of getting the right answer at the end," he said, then added: "Knowing that not every problem can be knocked down easily is what will really set you apart."

During the conferral of degrees, each participating graduate had a slide displayed on screen while their name was called.

The Mabel Beckman Prize, awarded annually to female juniors or seniors, recognizes academic and personal excellence, contributions to the Institute community, and outstanding character and leadership. It was awarded to Arushi Gupta and Isabella Camplisson. "[Gupta] served as a liaison to faculty members and created a peer advising program in which first- and second-year students were matched with mentors in their options," Rosenbaum said. "Isabella Camplisson's commitment to advocacy and service has helped engender a more welcoming, inclusive, and responsive campus environment."

The Frederic W. Hinrichs, Jr., Memorial Award recognizes the senior who, in the opinion of the undergraduate deans, made the greatest contribution to the student body during their undergraduate years. The award was given to Varun Shanker. "Vision, empathy, and resolve suffuse Varun's leadership and service," Rosenbaum said.

The George W. Housner Prize for Academic Excellence and Original Research is given to seniors who have demonstrated excellence in scholarship and the preparation of an outstanding piece of original scientific research. This year's Housner Prize was presented to Michael Yao and Alexander Zlokapa. "Demonstrating remarkable intellectual agility and ambition, Alex has brought his knowledge and technical ability to some of the most pressing challenges of the day," Rosenbaum said, including campus COVID-19 forecasting and racial inequality. Yao has worked in the lab of Mikhail Shapiro, professor of chemical engineering, on a new project focused on engineering probiotic bacteria that can be controlled remotely using ultrasound in the service of microbial therapies like those now being developed to treat certain cancers. "Embodying the ideals of a citizen scientist, Michael has applied his interest in diagnostic and therapeutic technologies to work with Atria Connect, a medical nonprofit he co-founded to bring training in handheld ultrasound tools to physicians in rural Haiti."

The recipients of the final award, the Milton and Francis Clauser Doctoral Prize, were first announced at the commencement ceremony, as is the tradition with this prize. Rosenbaum said the Clauser Prize is awarded to students whose PhD theses reflect extraordinary standards of quality, innovative research, and the potential of opening new avenues of human thought and endeavor. This year, for the third time in the Institute's history, two awards were given because of a tie vote.

David J. Anderson, Seymour Benzer Professor of Biology, Director of the Tianqiao and Chrissy Chen Institute for Neuroscience, and academic adviser to this year's first recipient, Hui (Vivian) Chu. Chu was given the prize for her thesis, "Neural Control of Male and Female Aggression in Drosophila." Anderson explained that fruit fly males and females fight differently; males lunge while females headbutt. "Despite these sex differences in attack behavior," he said, "Vivian discovered a unique neuronal cell type that controls aggressiveness in both sexes, the first of its kind to be described in any animal."

Mansi Kasliwal, assistant professor of astronomy, was the adviser for the second Clauser Prize winner, Kishalay De, who won for his thesis, "The Whisper and the Bang: Cosmic Fireworks in the Lives of Compact Binaries." In presenting the award, Kasliwal said, "Kishalay has built the very first infrared wide-field surveyor, and it is now deployed at Palomar Observatory. This surveyor has opened an entirely new window into our universe."

In closing the event, Rosenbaum referenced the famous quote by Nobel Laureate Dennis Gabor, who said, "The future cannot be predicted, but futures can be invented," telling graduates: "You are the consummate inventors. You have the skills and the initiative and the confidence to make a difference." Lastly, the Perseverance rover sent its congratulations from the surface of Mars, charging Caltech graduates to "dare mighty things."

Following the commencement ceremony, 302 people joined a virtual champagne toast over Zoom that also included the nearly 200 graduates who gathered on campus. Parents and friends congratulated the graduates, while the new alumni shared their favorite memories of the Institute. Rosenbaum quoted a few lines from the poet Mark Strand before telling the graduating class, "You will move through life shaped by Caltech. I wish you wholeness and magic on your journey forward."