In the 1960s, an exotic phase of matter known as an excitonic insulator was proposed. Decades later, evidence for this phase was found in real materials. Recently, particular attention has centered on Ta2NiSe5 because an excitonic insulator phase may exist in this material at room temperatures. The substance is made up of the elements tantalum, nickel, and selenium, and has the potential to lead to breakthroughs in more power-efficient, faster computers.

Now, in a new Physical Review Letters study from Caltech, researchers have, for the first time, figured out how to "flip the bits" of the excitonic insulator found in Ta2NiSe5. Computers communicate using a binary language of 1s and 0s, which are also called bits. For computers to work, the bits need to switch on or off (with 1s being on and 0s off). Some of today's computing hardware works by flipping the magnetic moments, or orientations, of electrons, which can be either up or down. While excitonic insulators do not have magnetic moments, in Ta2NiSe5 they do harbor two intrinsic orientations that can be used to represent 1s and 0s.

"In the case of magnetic moments, one can flip their direction by applying opposite magnetic fields, for instance. But there is no known equivalent of a magnetic field for excitonic insulators. We came up with a way of using light to perform this task," says David Hsieh, a professor of physics at Caltech, member of the Institute for Quantum Information and Matter (IQIM), and a co-author on the new study.

In the new theoretical and experimental study, the physicists demonstrate how to use bursts of laser light to control the excitonic insulator phases on timescales shorter than a picosecond, which is one-trillionth of a second. While the work has implications for ultrafast computer processing, the researchers are also excited about the fundamental aspects of their discoveries.

"In the process of learning to control and manipulate this material, we are also revealing the underlying rules of nature for a rare state of matter," says the study's lead author Honglie Ning, a graduate student working in Hsieh's lab. 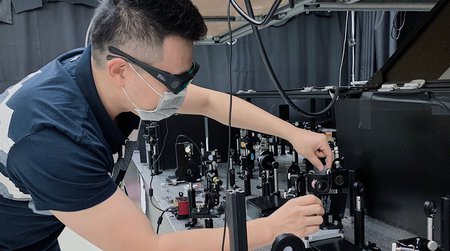