The Sherman Fairchild Foundation, a longtime supporter of research at Caltech, has granted the Institute $20 million for the construction of laboratories that integrate gravitational-wave science and quantum precision measurement. While each of these fields shapes the other, they have historically been pursued separately.

Caltech has begun design of the laboratories, which will include 12,000 square feet of
best-in-class experimental facilities. They are the first phase of a planned Center for Quantum Precision Measurement (CQPM) to front California Boulevard that will physically connect to nearby mathematics and physics buildings.

"These laboratories will be a hub for researchers across the disciplines, a multi-disciplinary center encompassing quantum experiment and theory that will touch almost every corner of campus," says Caltech president Thomas F. Rosenbaum, the Sonja and William Davidow Presidential Chair and professor of physics. "Students and faculty in astronomy, biology, chemistry, computer science, engineering, materials science, mathematics, and physics will all benefit from the center's influence."

Researchers at Caltech and other universities and institutions are developing new techniques to create and control complex quantum systems, ones made up of many atoms and subatomic particles. Using these techniques, Caltech scientists aim to invent tools that will use quantum phenomena to change what can be measured, detected, and observed, with profound ramifications for science and society.

More sensitive instruments will enable deeper exploration of longstanding mysteries such as the structure of spacetime and the inner workings of living cells. In the decades ahead, the potential locations of life beyond Earth could also be probed. New quantum materials and devices, meanwhile, will enable advances across computing and engineering.

"The laboratories will accelerate the exchange of expertise and ideas among researchers in gravitational-wave science, quantum sensing, and quantum information," says Fiona Harrison, Caltech's Harold A. Rosen Professor of Physics and the Kent and Joyce Kresa Leadership Chair of the Division of Physics, Mathematics and Astronomy.

"New fundamental quantum strategies are required to push the sensitivity of future gravitational-wave detectors so they can reach to the edge of the universe," Harrison says. "These strategies will be developed through the broad exchange of ideas, and many areas of metrology will benefit."

Fields that Advance Together

The field of quantum measurement arose from the half-century quest to build gravitational-wave detectors, instruments that can detect and measure ripples in spacetime. Generations of researchers collaborated to create LIGO (the Laser Interferometer Gravitational-wave Observatory), which made history in 2015 by directly detecting gravitational waves.

These researchers' insights and technical advances helped the broader scientific community see new possibilities for controlling and scaling up quantum phenomena that typically are observed at subatomic levels. Once scaled up, these phenomena can be used to enable ultraprecise measurement and sensing.

The new laboratories will bring together these fields, which have such a strong mutual influence.

The laboratories will be named for a scientist who has shaped those fields: Kip Thorne (BS '62), Caltech's Richard P. Feynman Professor of Theoretical Physics, Emeritus. Thorne is among three scientists who shared the 2017 Nobel Prize in Physics for their roles in developing LIGO.

The Sherman Fairchild Foundation is an early and enduring investor in Thorne's research program and those of scientists he has mentored. It funded Simulating eXtreme Spacetimes, a research initiative that gave scientists the ability to interpret gravitational-wave signals and attribute them to specific cosmic events in time for LIGO's first detection of gravitational waves.

The foundation's philanthropy to Caltech dates back to the 1970s. In addition to crucial support for gravitational-wave research, grants have supported 80 outstanding postdoctoral scholars at Caltech and brought hundreds of distinguished visitors to campus.

Contributions from the foundation also enabled annual visits by Stephen Hawking, during which he advanced ideas at the intersection of cosmology, measurement, and information with Thorne and John Preskill, Caltech's Richard P. Feynman Professor of Theoretical Physics and the Allen V. C. Davis and Lenabelle Davis Leadership Chair of the Institute for Quantum Information and Matter (IQIM).

The foundation endowed the Walter Burke Institute for Theoretical Physics, named for the late Walter Burke, a former member of the Caltech Board of Trustees and the longtime president of the foundation. It contributed to the Sherman Fairchild Library of Engineering and Applied Science and the Cahill Center for Astronomy and Astrophysics.

The Kip Thorne Laboratories and the planned center will incorporate a commitment to inclusion, diversity, equity, and accessibility.

The center will leverage an array of Caltech programs, such as WAVE, FUTURE, and the Presidential Postdoctoral Fellows Program, to build diverse cohorts of students and postdoctoral scholars. Faculty hiring processes will continue to identify the strongest and most diverse candidate pools, and the center will cultivate role models, mentors, and an inclusive environment in which to work.

"The Kip Thorne Laboratories and the planned Center for Quantum Precision Measurement will change the scientific community itself by modeling a future in which talent rises unimpeded from all sectors of society to create new knowledge and improve the future," says Rosenbaum. 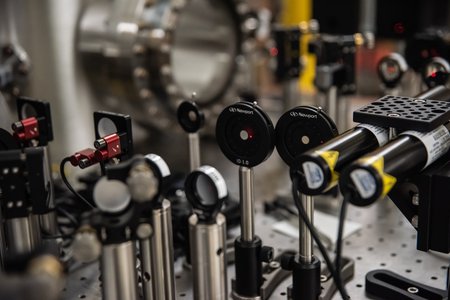