Organs—like the heart, brain, and kidneys—are complex structures made up of a combination of different cells that work cooperatively to perform specific functions. For example, around 70 distinct types of cells work together in the human eye to enable our visual perception. How do different types of cells evolve to cooperate like this?

An ideal organism to address this question is the rove beetle. That is because many of the 64,000 species of rove beetle have evolved a unique type of organ to protect themselves: a chemical gland used to spray predators with toxic chemicals. Now, Caltech researchers have mapped out the precise process by which these glands evolved in the rove beetle Dalotia coriaria. The work reveals a new paradigm for how complex organs may evolve throughout the animal kingdom.

The research was conducted in the laboratory of Joe Parker, assistant professor of biology and biological engineering. A paper describing the study appears in the journal Cell on December 9.

Rove beetles such as Dalotia need chemical defense systems because their bodies cannot physically protect them from predators. Unlike other types of beetles, rove beetles have flexible abdomens that enable them to weave through and occupy soil environments where other beetles cannot make a home. However, this flexibility means that the beetles' abdomens are unprotected, providing them with a strong evolutionary pressure to come up with chemical defenses.

The Dalotia beetles used in the current study have a so-called tergal gland that releases a nasty cocktail made of two types of compounds. The first is a benzoquinone, a highly toxic compound that exists on its own as a solid and thus is not dangerous to predators. The second part of the cocktail is a solvent (a blend of an alkane and three esters) into which the benzoquinones can be dissolved. The solvent blend by itself is also benign; however, when it dissolves the benzoquinones, it weaponizes them.

When confronted with a predator, Dalotia whips its abdomen up, scorpion-like, and ejects the cocktail at its enemy from the tergal gland.

In this work, researchers in the Parker laboratory discovered that the tergal gland is made up of two unique cell types: one that makes solid benzoquinones and another that makes the solvent that dissolves these noxious chemicals.

"These beetles are fantastic models for understanding how new kinds of ecological relationships emerge during evolution through changes at the molecular, cellular, and behavioral levels," says Parker. "As part of this question, we're very interested in how rove beetles have pieced together these glandular structures in their abdomens, which are made of different cell types that work together. These structures are the embodiment of a major conundrum: How do complex organs, often composed of many different cell types that appear to seamlessly cooperate with each other, evolve? How this cooperativity emerges during evolution is challenging to explain."

Using single-cell RNA sequencing, the team examined gene expression in each cell type, which allowed them to find biosynthetic enzyme pathways leading to the production of each type of compound. They then created a single-cell "atlas" of the beetle's abdomen that permitted them to examine gene expression in all of the other types of abdominal cells. With this approach, the team discovered that each type of gland cell and its specialized function arose from a kind of Frankenstein-like cobbling together of the genetic components and functions of more ancient cell types found elsewhere in the beetle.

Further experiments—one involved placing the beetles into battle arenas with ant predators—revealed that when either the solvent or benzoquinone pathway was knocked down, the beetles lost their defensive capabilities. This suggested that under natural selection, both cell types are needed to generate the beetles' chemical-defense system. The investigators also found that the cocktail made by the tergal gland has antimicrobial properties, further raising the adaptive value of this novel organ.

The authors think the gland evolved via co-evolution between the two cell types. "The solvent cells created a niche for a second cell type to produce the solid benzoquinones, which could dissolve in the alkane and esters. A highly toxic secretion emerged that massively raised the gland's adaptive value, locking the two cell types into a unit where they cooperate. In essence, a new organ emerged," Parker says.

Demonstrating how the two cell types synergize required an interdisciplinary approach, says Adrian Brückner, the study's first author and a postdoctoral scholar and Simons Fellow of the Life Sciences Research Foundation. "To get at why the beetle evolved this precise chemical cocktail, we needed to explore the physiochemical properties of the secretion," he says. Serendipitously, Robert Learsch (MS '21), a graduate student in the laboratory of Julia Kornfield (BS '83, MS '84), Elizabeth W. Gilloon Professor of Chemical Engineering, had just built a microdroplet rheometer, a device that can measure the physical properties of tiny volumes of liquid—including beetle secretions.

"It was a classic Caltech collaboration," Brückner explains. "We made synthetic gland secretions, and with Rob's help could show that Dalotia makes a near-optimal cocktail: potent toxicity but also the right viscosity and spreading capacity for an effective chemical defense."

Based on these findings, Parker's group could show that the enzyme pathways in each cell type had co-evolved with each other. "They've been assembled during evolution in a way that streamlined the final secretion," says Brückner.

According to Parker, "The beauty of this system is that you can experimentally connect all scales of the evolutionary process: from the catalytic properties of an enzyme, to its role in a biosynthetic pathway, to the function of the cell type in which that pathway is expressed. This, in turn, only makes sense in the context of adaptive cooperative interactions with other cell types within the gland and their collective organ-level impact on beetle fitness in an ecological context."

Parker adds that the evolutionary process uncovered in Dalotia's tergal gland can be extrapolated to understanding the evolution of more complex organs, such as the human eye. "The scenario we find playing out in the tergal gland—an organ made of only two cell types—you can imagine could go through further rounds as cell types create niches for new ones to be added, eventually generating really elaborate multicellular complexity." 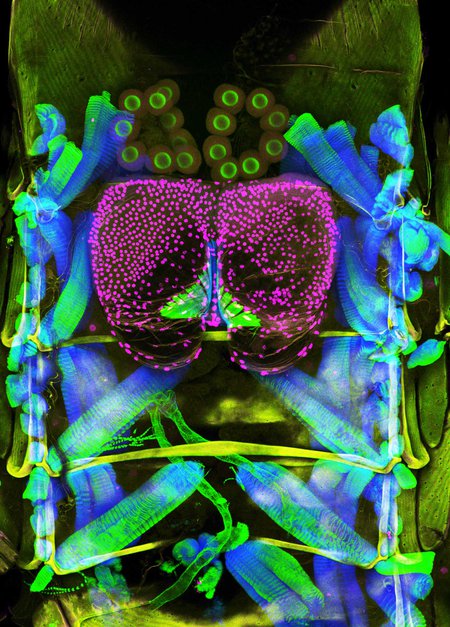 A microscope image of Dalotia coriaria's tergal gland, which it uses to spray predators with noxious chemicals. Researchers in the laboratory of Joe Parker have discovered how two cell types co-evolved to create this new gland. Credit: J. Parker
Image Lightbox
Subscribe
The Caltech Weekly