The Vast Little Library Inside of Your Cells

The human genome can be thought of as a massive library, containing over 20,000 different "instruction manuals": your genes. For example, there are genes which contain information to build a brain cell, a skin cell, a white blood cell, and so on. There are even genes that contain information about regulating the genome itself—like books that explain how to organize a library. The ability to regulate gene expression—in other words, the cell's ability to turn various constellations of genes on or off—is the basis of why different cells (such as a muscle cell or a brain cell) have different forms and functions.

For any library to be useful to a reader, it needs to be organized in an easily searchable way. For example, all the books pertaining to world history may be on one shelf, whereas the cookbooks may be in an entirely different section of the library. In a cellular nucleus, there is over six feet of genetic material packed into a space 50 times smaller than the width of a human hair. How is the "library" in the nucleus organized? When a cell needs to regulate certain genes, how does the cellular machinery find the right ones amongst 20,000 others?

A new paper from the laboratory of Mitchell Guttman, professor of biology, uses a powerful new tool that can peer into the world of the cell's genetic material (DNA and RNA) in order to find answers to these questions.

Led by former Guttman lab graduate student Sofia Quinodoz (PhD '20)—now a Hanna Gray postdoctoral fellow at Princeton University—the team found that molecules of non-coding RNA are responsible for establishing "compartments" within the nucleus and shepherding in key molecules to precise regions in the genome. Noncoding RNA are molecules that do not encode for proteins, and instead have an array of functions that are often still mysterious to biologists. In the library analogy, non-coding RNA molecules act as the "shelves" that organize different groups of genes and the machinery that interacts with them.

Understanding how genetic material is organized spatially is a crucial part of understanding the basic workings of life. Dysfunction within the nucleus is a hallmark of many diseases, including cancer, neurodegenerative disorders, and others.

The research was made possible by a powerful tool developed in the Guttman laboratory that enables detailed views of the RNA world, called RD-SPRITE (RNA and DNA Split-Pool Recognition of Interactions by Tag Extension). In essence, RD-SPRITE works by tagging molecules of RNA and DNA with miniscule unique barcodes based on their locations; analyzing the barcodes can then tell you which molecules were at which positions within the cell.

"This tool is something I've dreamed of since I was a grad student. It's remarkable that Sofia was able to make this happen," says Guttman. "It changes what we can look at in the RNA world. It's like developing a new microscope; you can start looking at things you could never see before. This discovery about RNA and organization is the tip of the iceberg in terms of what we are able to start finding in these data."

The team plans to use RD-SPRITE to compare the spatial organization of the nucleus between healthy cells and disease cell types, to understand how gene expression and the physical structure of the nucleus may be affected in disease states. 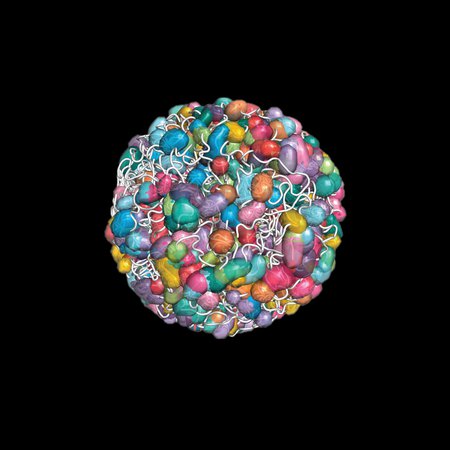 DNA and associated cellular machinery is gathered and organized by certain non-coding RNAs, each region shown in a different colored jellybean-shape in this model. Credit: Courtesy of Inna-Marie Strazhnik
Image Lightbox
Subscribe
The Caltech Weekly