In 2005, an ultramarathon runner ran continuously 560 kilometers (350 miles) in 80 hours, without sleeping or stopping. This distance was roughly 324,000 times the runner's body length. Yet this extreme feat pales in comparison to the relative distances that fruit flies can travel in a single flight, according to new research from Caltech.

Caltech scientists have now discovered that fruit flies can fly up to 15 kilometers (about 9 miles) in a single journey—6 million times their body length, or the equivalent of over 10,000 kilometers for the average human. In comparison to body length, this is further than many migratory species of birds can fly in a day. To discover this, the team conducted experiments in a dry lakebed in California's Mojave Desert, releasing flies and luring them into traps containing fermenting juice in order to determine their top speeds.

The research was conducted in the laboratory of Michael Dickinson, Esther M. and Abe M. Zarem Professor of Bioengineering and Aeronautics and executive officer for biology and biological engineering. A paper describing the study appears in the journal Proceedings of the National Academy of Sciences on April 20.

The work was motivated by a longstanding paradox that was identified in the 1940s by Theodosius Dobzhansky and other pioneers of population genetics who studied Drosophila species across the Southwest United States. Dobzhansky and others found that fly populations separated by thousands of kilometers appeared much more genetically similar than could be easily explained by their estimates of how far the tiny flies could actually travel. Indeed, when biologists would release flies outdoors, the insects would often simply buzz around in circles over short distances, like they do in our kitchens.

Did flies behave differently when out in the wild, in search of food? In the 1970s and '80s, a group of population geneticists attempted to address this paradox by coating hundreds of thousands of flies in fluorescent powder and releasing them one evening in Death Valley. Remarkably, the group detected a few fluorescent flies in buckets of rotting bananas up to 15 kilometers away the next day.

"These simple experiments raised so many questions," says Dickinson. "How long did it take them to fly there? Were they just blown by the wind? Was it an accident? I have read that paper many times and found it very inspiring. No one had tried to repeat the experiment in a way that would make it possible to measure whether the flies were carried by the wind, how fast they were flying, and how far they can really go."

To measure how flies disperse and interact with the wind, the team designed "release and recapture" experiments. Led by former postdoctoral scholar Kate Leitch, the team made several trips to Coyote Lake, a dry lakebed 140 miles from Caltech in the Mojave Desert, with hundreds of thousands of the common lab fruit fly, Drosophila melanogaster, in tow.

The aim was to release the flies, lure them into traps at set locations, and measure how long it took the insects to fly there. To do this, the team set up 10 "odor traps" in a circular ring, each located along a one-kilometer radius around the release site. Each trap contained a tantalizing cocktail of fermenting apple juice and champagne yeast, a combination that produces carbon dioxide and ethanol, which are irresistible to a fruit fly. The traps also each had a camera, and were constructed with one-way valves so that the flies could crawl into the trap toward the cocktail but not back out. In addition, the researchers set up a weather station to measure the wind speed and direction at the release site throughout each experiment; this would indicate how the flies' flight was affected by the wind.

So as not to interfere with their flight performance, the team did not coat the flies with identifiers like fluorescent powder. So how did they know they were catching their own fruit flies? Before the release, the team first placed the traps and checked them over time, and found that although D. melanogaster are found at date farms within the Mojave, they are extremely rare at Coyote Lake.

The flies released by the team had been originally collected at a fruit stand and then were raised in the lab, but they were not genetically modified in any way. The team performed the experiments after receiving permits from the Bureau of Land Management.

At experiment time, the team drove the buckets of flies to the center of the circle of traps. The buckets contained plenty of sugar, so that the insects would be fully energized for their flight; however, they contained no protein, giving the flies a strong drive to search for protein-rich food. The team estimated that the flies would not be able to smell the traps from the center of the ring, forcing them to disperse and search.

At a precise time, a team member at the center of the circle opened up the buckets simultaneously and quickly released the flies.

"The person who stayed at the center of the ring to open the lids off of all the buckets witnessed quite a spectacle," says Leitch. "It was beautiful. There were so many flies—so many that you were overwhelmed by the whirring drone. A few of them would land on you, often crawling in your mouth, ears, and nose."

The team repeated these experiments under various wind conditions.

It took about 16 minutes for the first fruit flies to cover one kilometer to reach the traps, corresponding to a speed of approximately 1 meter per second. The team interpreted this speed as a lower limit (perhaps these first flies had buzzed around in circles a bit after release or did not fly in a perfectly straight line). Previous studies from the lab showed that a fully fed fruit fly has the energy to fly continuously for up to three hours; extrapolating, the team concluded that D. melanogaster can fly roughly 12 to 15 kilometers in a single flight, even into a gentle breeze, and will go further if aided by a tailwind. This distance is approximately 6 million times the average body length of a fruit fly (2.5 millimeters, or one tenth of an inch). As an analogy, this would be like the average human covering just over 10,000 kilometers in a single journey—roughly the distance from the North Pole to the equator.

"The dispersal capability of these little fruit flies has been vastly underestimated. They can travel as far or farther than most migratory birds in a single flight. These flies are the standard laboratory model organism, but they are almost never studied outside of the laboratory and so we had little idea what their flight capabilities were," Dickinson says.

In 2018, the Dickinson laboratory discovered that fruit flies use the sun as a landmark in order to fly in a straight line in search of food; flying aimlessly in circles could be deadly, so there is an evolutionary benefit to being able to navigate efficiently. After completing the release experiments described in this study, the team proposed a model that suggests that each fly chooses a direction at random, uses the sun to fly straight in that direction, and carefully regulates its forward speed while allowing itself to be blown sideways by the wind. This enables it to cover as much distance as possible and increases the probability that it will encounter a plume of odor from a food source. The team compared their model with traditional models of random insect dispersal and found that their model could explain the results of the desert releases more accurately because of the flies' propensity to maintain a constant heading once released.

Even though D. melanogaster has been co-evolving with humans, this work shows that the fly brain still contains ancient behavioral modules. Dickinson explains: "For any animal, if you find yourself in the middle of nowhere and there's no food, what do you do? Do you just hop around and hope you find some fruit? Or do you say—'Okay, I'm going to pick a direction and go as far as I can in that direction and hope for the best.' These experiments suggest that that's what the flies do."

The research has broader implications for the field of movement ecology, which studies how populations move around the world, essentially shifting biomass for other animals to eat. In fact, during their early pre-release experiments to check for local populations of Drosophila, the team several times caught an invasive species of fly, the spotted-wing Drosophila (Drosophila suzukii), which causes significant agricultural damage across the West Coast.

"We set up these traps in the middle of nowhere, not the Central Valley where there would be fields of food, and still we find these agricultural pests cruising through," says Dickinson. "It's kind of scary to see how far these introduced species can travel using simple navigational strategies."

The paper is titled "The long-distance flight behavior of Drosophila supports an agent-based model for wind-assisted dispersal in insects." In addition to Leitch and Dickinson, additional co-authors are Francesca Ponce, William Dickson, and former Dickinson laboratory postdoctoral scholar Floris van Breugel (PhD '14, now of the University of Nevada, Reno). Funding was provided by the Simons Foundation and the National Science Foundation. Dickinson is an affiliated faculty member of the Tianqiao and Chrissy Chen Institute for Neuroscience at Caltech.

Written by
Lori Dajose
Contact
Lori Dajose
(626) 395‑1217
[email protected]
Researchers from Caltech's Dickinson Lab head out to the Mojave Desert to release and track hundreds of thousands of fruit flies in a series of experiments. They find that the flies could travel long distances and even navigate into headwinds when searching for food, helping to illuminate a neurobiological and behavioral toolkit that could be common to a wide variety of insects.
Image Lightbox 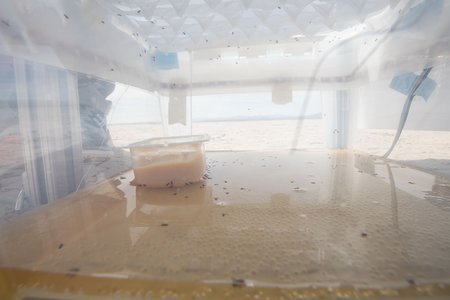 At the capture site, flies are lured in by a tantalizing cocktail of fermenting apple juice. Measuring the time it takes for the flies to travel from the release site to these traps enables researchers to estimate how fast and far a fruit fly can travel. Credit: F. van Breugel
Image Lightbox 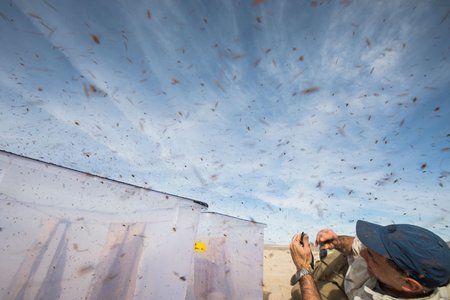 Michael Dickinson ducks out of the way after releasing buckets containing thousands of fruit flies on a dry lakebed in the Mojave Desert. Credit: F. van Breugel
Image Lightbox
Subscribe
The Caltech Weekly