While some animals are known to consistently regenerate amputated body parts—certain flatworms even regrow their entire heads—none of the species in the study had ever been shown to regrow limbs after certain injuries. The work suggests the ability to regenerate is somehow innate across various species and can be triggered under the right conditions.

A paper describing the research, primarily conducted in the laboratory of Lea Goentoro, professor of biology, appears in the journal eLife on December 7.

In 2015, while conducting other experiments with the moon jellyfish Aurelia coerulea, former graduate student Michael Abrams (PhD '18) and former lab technician Ty Basinger noticed that on rare occasions, the jellyfish would show small growths where one of their arms had been amputated.

Further study indicated four environmental conditions helped to induce jellyfish to regrow an amputated appendage. First, the animals needed to be swimming; in the lab, they actively moved in a conical bubbling tank. Second, they need a high level of nutrients, provided through daily plankton feedings. Third, the provision of two nutrient-system activators, insulin and the essential amino acid leucine, significantly increased the frequency and extent of regeneration—as did the fourth factor, a low-oxygen environment.

"Insulin and leucine are not exotic molecules," says Abrams, who is now a postdoctoral fellow at UC Berkeley. "Most current studies of regeneration focus on specific developmental signals. But what we found are simple nutrient factors, administered in a simple way, that can promote regeneration. We wondered—could this work in other animals?"

The team then examined if similar dietary conditions could induce normally non-regenerative laboratory animals to regenerate appendages after injury. Graduate student Fayth Tan led a team that developed a protocol for amputations in Drosophila melanogaster fruit flies, optimized the insulin and leucine additions in the fly food, and subsequently observed the first evidence of limb regrowth. Then, a team led by graduate students Yutian Li and Anish Sarma set up time-lapse imaging to measure the extent of the regrowth over a period of several weeks.

Though Drosophila have never been shown to regrow limbs, the team found increased insulin and leucine in the fly food led to some regrowth in 49 percent of flies.

"Drosophila are known to specifically not regenerate—not just limbs, but any body parts—so we were excited to see this," says Li. "The regrowth is not just random growth; it is a structured reconstruction of cuticle, sensory bristles, and joint."

Finally, led by Tan and former technician Martin Heithe, the team turned to lab mice to test if the same factors would induce regeneration in mouse digits. Mice have shown the ability to regrow fingertips, but only if the injury is above the fingernail. (Human children have also demonstrated this ability in some cases.)

The team performed amputations below the fingernail, across the distal portion of bone, and gave the mice leucine and sugars in their drinking water. Ten percent of mice were then able to regrow at least part, and in a few cases nearly all, of the amputated digit.

In future work, the team aims to understand the mechanism underlying how these common and relatively simple molecules are able to coax regrowth of very different complex structures—what kinds of cells are involved, and so on. These findings open up new questions and present new models for studying how to induce regeneration. 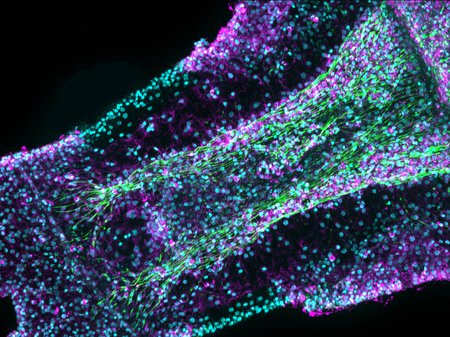