For a bacterium, the world can be a tough place to survive, a constant competition for food and space. Some bacteria, like Pseudomonas aeruginosa, secrete toxic molecules that act as a defense mechanism against nearby competitor bacteria. This natural antibiotic, pyocyanin, is also toxic to Pseudomonas itself, but Pseudomonas has evolved ways to live in its presence.

For people with compromised immune systems, Pseudomonas can develop into dangerous infections. For example, Pseudomonas can cause serious lung infections in people with cystic fibrosis and is also becoming resistant to antibiotics prescribed in clinical settings. Two Caltech graduate student researchers, Elena Perry and Lucas Meirelles, theorized that understanding how Pseudomonas tolerates its own toxins may provide insights into how the bacteria become resistant to clinical antibiotics. Clinical antibiotics are often based on molecules found in nature, and therefore many are similar in structure to natural antibiotics like pyocyanin.

"The big idea is: If the bacteria have evolved these defenses against their own toxins, does that help them survive and even thrive if they're then exposed to a synthetic clinical drug that is intended to treat infections?" says Perry.

Now, Perry and Meirelles present results from their study in a new paper appearing in the journal PLOS Biology on March 10. The work was done in the laboratory of Dianne Newman, the Gordon M. Binder/Amgen Professor of Biology and Geobiology and executive officer for biology and biological engineering.

The Newman laboratory has studied Pseudomonas for nearly two decades. During this time, the lab has uncovered important beneficial functions for pyocyanin and related molecules, challenging the conventional wisdom that they evolved as agents of "chemical warfare" against other bacteria. Yet the fact remains that pyocyanin is indeed toxic under certain conditions. Meirelles and Perry decided to reexamine this aspect of pyocyanin's physiological impact from a new perspective—one that was mindful of the ecological context of the organism making the chemical. The researchers developed a very close collaboration, each approaching the effects of pyocyanin production from a different angle.

Meirelles tackled the role of pyocyanin in tolerance. He found that the production of pyocyanin induces a series of changes within Pseudomonas cells that helps the organism survive the stress caused by the molecule. Specifically, a cell that senses the presence of pyocyanin produces tiny pumps to help move the molecule out of the cell and into the environment. Interestingly, the same pumps can transport clinical antibiotics that are similar in structure to pyocyanin. Thus, if pyocyanin is present when Pseudomonas is treated with these toxic drugs, the pumps will transport the antibiotics out of the cell, allowing it to survive.

Perry, in contrast, examined how pyocyanin production enables Pseudomonas to become resistant to antibiotics and reproduce in their presence. Often, pathogens like Pseudomonas acquire antibiotic resistance through spontaneous mutations—for example, in genes related to the cellular targets of the antibiotic. Such mutations can cause the bacteria to be unaffected by the toxic drug and allow them to reproduce as normal.

Perry found that when bacteria grow in the presence of pyocyanin, antibiotic-resistant mutants appear at a much higher frequency, especially if the structure or toxic effects of the antibiotic are similar to pyocyanin.

"We think that when the cell has defense mechanisms against pyocyanin turned on, it's more likely that spontaneous mutants with low-level antibiotic resistance will be able to survive distress and gain a foothold in the bacterial population and start replicating themselves," Perry explains.

Finally, the two examined how Pseudomonas behaves when in a community with other bacterial species—an environment analogous to the bacterium's natural state, including in a disease setting. Pathogenic Burkholderia bacterial species, particularly the ones classified within the "Burkholderia cepacia complex," are often found cohabiting with Pseudomonas in the soil or during infections. Although Burkholderia does not have the capacity to produce pyocyanin, this study shows that it benefits from the same pyocyanin-mediated tolerance and resistance exhibited by its Pseudomonas neighbors.

"The idea is that, if you have a community formed by different bacterial species where one member is making these types of toxic molecules and others are good at handling the toxicity, the antibiotic tolerance or resistance effects are seen in the entire community," says Meirelles.

This research also indicates that laboratory testing of antibiotics ought to be done under conditions that are similar to those of a real infection. Pseudomonas normally makes pyocyanin when the bacteria's environment is crowded, creating competition for resources. However, antibiotics are usually tested in the lab under low-density conditions in which pyocyanin is not produced. Thus, researchers may not be getting a full picture of how bacteria will behave when treated with antibiotics in a clinical setting.

"In an infection, you often have a community of different bacterial species," says Meirelles. "Our work highlights the importance of knowing which molecules are being made and secreted by these pathogens, and which defense mechanisms are induced as a response to the presence of these molecules. If you know the molecules and you know the defenses, you can make a better decision about which antibiotic might be more effective against those bacteria."

"Elena and Lucas had a spectacular collaboration, an equal partnership of two creative and talented individuals that was a joy to witness and share," says Newman. "[This was] one of those special times when science and friendship collide, enriching every aspect of the work."

The paper is titled "Bacterial defenses against a natural antibiotic promote collateral resilience to clinical antibiotics." Meirelles and Perry are the paper's first authors. In addition to Newman, former Newman lab postdoctoral scholar Megan Bergkessel, now of the University of Dundee, Scotland, is a co-author. Funding was provided by the National Institutes of Health, the ARO, and the Doren Family Foundation. 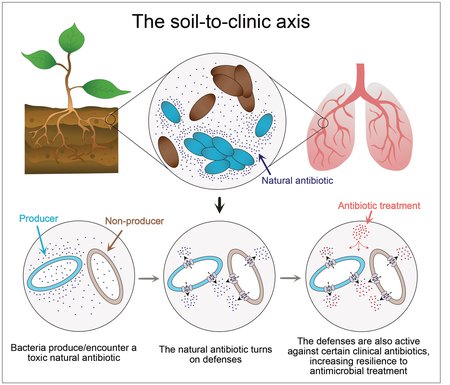 How bacteria behave and interact in their natural environments has important implications for how they behave and may be treated in disease-settings. This graphic illustrates that when bacteria produce or encounter a toxic natural antibiotic, they turn on cellular defenses, which are also active against certain clinical antibiotics. This increases resilience to antimicrobial treatments in a clinical setting. Credit: Courtesy of Newman laboratory
Image Lightbox 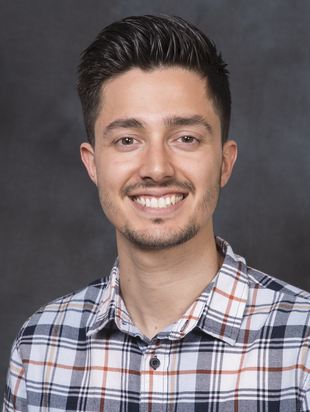 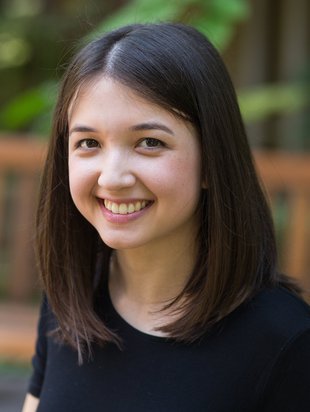