In the event of a major earthquake in Los Angeles, first responders ideally would immediately have a map of the most intense shaking around the city—allowing them to send help to the hardest-hit areas first.

A new collaboration between Caltech researchers and schools of the Los Angeles Unified School District (LAUSD) provides a crucial step in the creation of such damage maps by vastly broadening the scope of a dense network of seismic sensors in the Los Angeles Basin.

To create an accurate shaking-intensity map, seismologists need to measure ground motion—which can vary from kilometer to kilometer because of differences in soil and earth structure—at many locations across the region. In 2011, Professor of Geophysics Rob Clayton and his colleagues, Professor of Engineering Seismology Tom Heaton and Simon Ramo Professor of Computer Science, Emeritus, K. Mani Chandy, began creating a web of such sensors via the Community Seismic Network (CSN), a program funded by the Gordon and Betty Moore Foundation.

The CSN consists of hundreds of small, inexpensive accelerometers—instruments that detect ground movements before, during, and after a seismic event—installed initially in the homes of volunteers in the greater Pasadena area. Since 2011, each device has been actively collecting and feeding seismic information to the CSN via its host house's Internet connection, allowing Clayton and his colleagues to create high-resolution maps of seismic activity in the western San Gabriel Valley. But the Caltech team wanted to find a way to expand the reach of the network throughout the earthquake-prone broader Los Angeles Basin. Their inventive solution? Integrate accelerometers into the infrastructure of L.A.'s public schools.

Through the efforts of Richard Guy, CSN project manager, sensors already have been installed in 100 LAUSD schools, covering an area ranging from northeast Los Angeles to downtown. CSN is now working to expand the project to include all of the district's more than 1,000 schools.

The new collaboration has the potential to help millions of people in Southern California when a big quake strikes. For example, data from the new network could be incorporated into the ShakeAlert early-warning system that is currently under development. Although no sensor can predict an earthquake, the accelerometers can detect an earthquake in one area of the L.A. Basin so quickly that an alert or warning could be sent to people in adjacent areas of the LA Basin before strong shaking arrives—potentially giving them enough time to find a safe spot.

The new dense network of sensors will also provide an improved map of shaking intensity for the whole region. The U.S. Geological Survey already provides a similar service called ShakeMap, which relies on sensors that are located several miles from one another and hence cannot provide a block-by-block resolution of shaking and possible damage. The new dense network of sensors has the potential to provide ShakeMap with a more accurate assessment of damage for response and recovery efforts.

"You can imagine a fire chief stepping out and saying, 'Wow. That was a big one. Now where do I go to help the community?' Obviously they want their focus to be where the maximum damage and danger is. They have other things to worry about too, but the best proxy for damage that we have is the level of shaking—and our dense network of sensors can provide that information," Clayton says.

But the new sensors do more than feed information into the network—they also provide valuable information to individual schools. "Principals have a particularly difficult problem in the event of an earthquake," Clayton says. "The first thing during a quake, of course, is to tell everyone to get under their desk. When the shaking stops, all of the kids are evacuated out of the school and into the schoolyard. And then what do principals do? At that point, they have to decide if it's safe enough to go back into the school, or if they should just send the kids home. But they do not know how badly the school is damaged."

The new school sensors could help inform this judgment call, Clayton says. Although they work in much the same way as those that were previously placed in volunteers' homes—recording ground accelerations and transmitting those data back to the researchers via an Internet connection—the sensors also contain an onboard computer that compares the event to a so-called fragility curve. Fragility curves provide predictions of the damage that a particular building would sustain under the shaking measured.

"Coupled with the fragility curve, the sensors could allow a school official to decide whether or not it is safe to reenter the school," Clayton says.

The Community Seismic Network's LAUSD collaboration was funded by the Gordon and Betty Moore Foundation. The network is a collaboration between Caltech's seismology, earthquake-engineering, and computer-science departments. 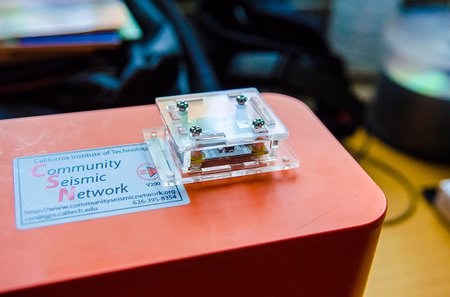 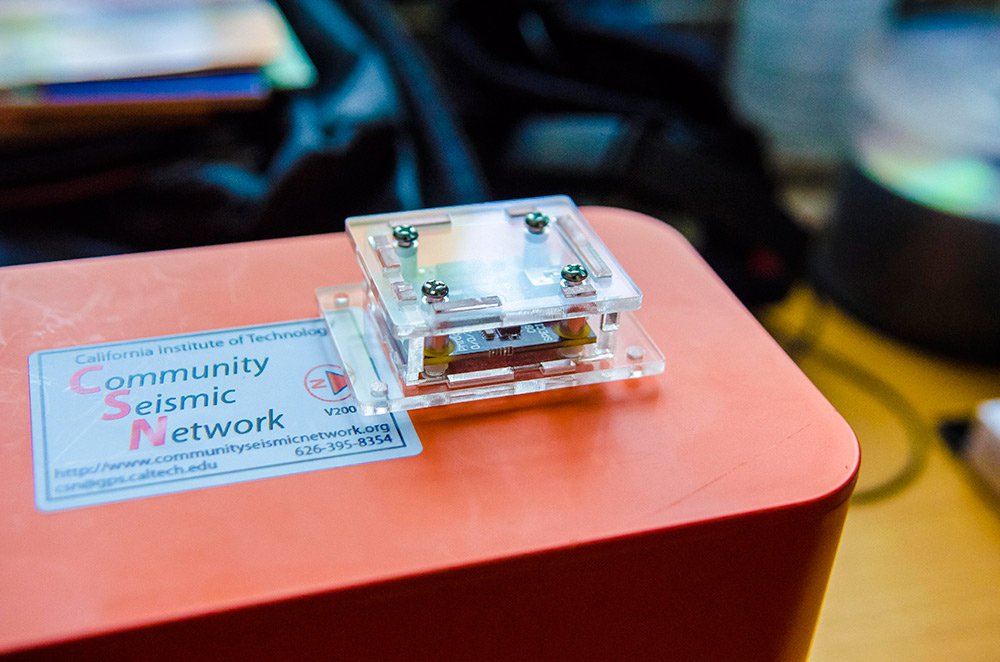