A sheet of magic-angle twisted bilayer graphene can host novel topological phases of matter, a study has revealed.

Magic-angle twisted graphene, first discovered in 2018, is made from two sheets of graphene (a form of carbon consisting of a single layer of atoms in a honeycomb-like lattice pattern), layered atop one another, with one sheet twisted at precisely 1.05 degrees with respect to the other. The resulting bilayer has unusual electronic properties: for example, it can be made into an insulator or a superconductor depending on how many electrons are added.

The discovery launched a new field of research into magic-angle twisted graphene, known as "twistronics." At Caltech, Stevan Nadj-Perge, assistant professor of applied physics and materials science, has been among the researchers leading the charge: in 2019, he and his colleagues directly imaged the electronic properties of magic-angle twisted graphene at atomic-length scales; and in 2020, they demonstrated that superconductivity in twisted bilayer graphene can exist away from the magic angle when coupled to a two-dimensional semiconductor.

Now, Nadj-Perge and his colleagues have found that magic-angle twisted bilayer graphene also has unexpected topological quantum phases. A paper about the work appears in the January 18 issue of Nature.

However, when strong magnetic fields are applied to the various types of materials, the behavior of electrons through them is modified, producing other possible states—or topological quantum phases. For example, under strong magnetic fields, the bulk of a material can become insulating while the surfaces (or edges, in the case of a two-dimensional material) are highly conductive. Theoretically, topological quantum phases could have many applications, including in quantum information processing.

In the new work, Nadj-Perge and colleagues used scanning tunneling microscopy to directly image twisted bilayer graphene with atomic resolution, and found that the strong interactions between electrons in twisted bilayer graphene enable the emergence of these topological phases without the need for a strong magnetic field. They also studied graphene twisted to alternative angles, but found the new topological phases to be present only at the magic angle.

"The discovery of topological phases in magic-angle twisted bilayer graphene opens up yet another chapter about this amazing material and brings us closer to understanding its electronic properties." says Nadj-Perge, corresponding author of the paper. "Most importantly, however, our findings also point toward new ways of engineering topological phases that can be pursued in the future." These materials could, in theory, have many applications; for example, certain excitations of topological phases could be used to perform information processing in future quantum computers.

The research at Caltech was funded by the National Science Foundation, the United States Department of Energy, the Kavli Nanoscience Institute, the Institute for Quantum Information and Matter at Caltech, the Walter Burke Institute for Theoretical Physics at Caltech, and the Kwanjeong Educational Foundation. 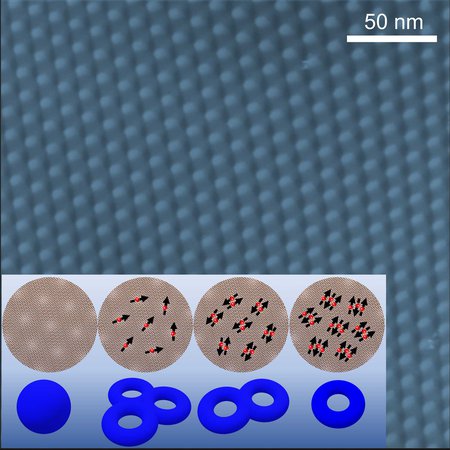 Real-space periodic potential in magic-angle twisted bilayer graphene imaged with scanning tunneling microscope. The inset shows the main result of the study: As more electrons illustrated by arrows are added to bilayer graphene, due to strong electronic correlations, the topology of the electronic bands changes in analogy to adding holes in the sphere. Credit: Stevan Nadj-Perge
Image Lightbox 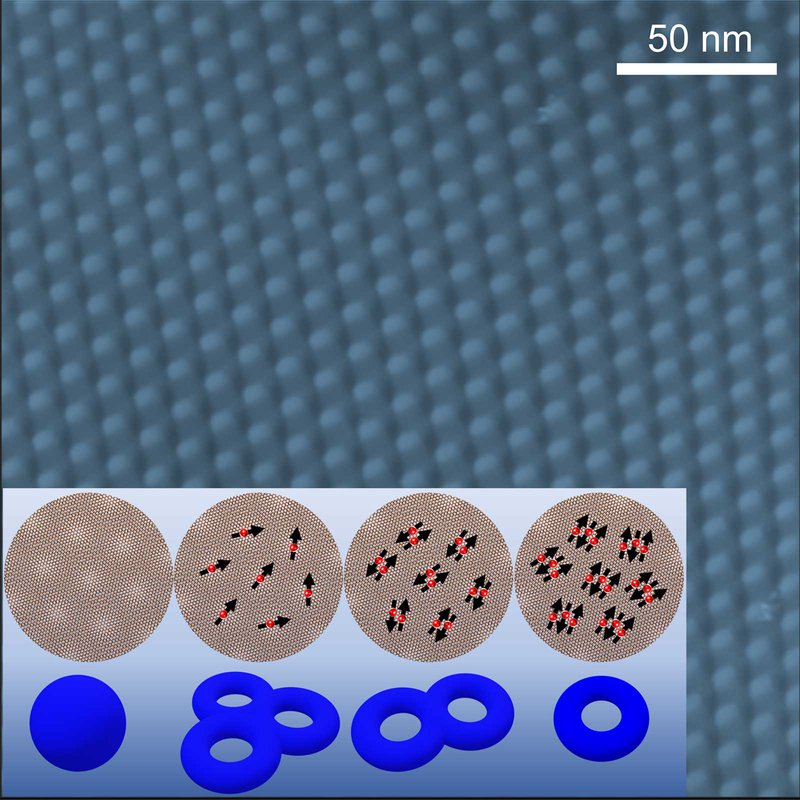 Real-space periodic potential in magic-angle twisted bilayer graphene imaged with scanning tunneling microscope. The inset shows the main result of the study: As more electrons illustrated by arrows are added to bilayer graphene, due to strong electronic correlations, the topology of the electronic bands changes in analogy to adding holes in the sphere.
Credit: Stevan Nadj-Perge
Download Full Image
Subscribe
The Caltech Weekly