In 2018, researchers made the surprising discovery that when you layer two sheets of single-atom-thick graphene atop one another and rotate them by precisely 1.05 degrees with respect to one another, the resulting bilayer material takes on new properties: when the density of electrons in the material is increased through the application of a voltage on a nearby electrode, it becomes a superconductor—electrons can flow freely through the material, without resistance. However, with a slight change in electron density, the bilayer becomes an insulator and prevents the flow of electrons.

The specific twist angle at which this occurs was nicknamed the "magic angle," and its discovery jumpstarted interest in a branch of physics known as twistronics. The electron densities that turn the material into a superconductor or an insulator are very close to one another, so the central question of bilayer graphene twistronics has become to understand why these states—insulators and superconductors—are so intimately related.

Now, a team at Caltech has discovered that when twisted bilayer graphene is placed in contact with a single-atom-thick material that contains the heavy element tungsten, it can exhibit superconductivity at angles relatively far from the magic angle, and it does not change into an insulator at any electron density, breaking the pattern. Their work was published in the journal Nature on July 15.

What does it mean to have insulators and superconductors occurring at similar electron densities, and why is this important?

When studying how materials conduct electricity, physicists often talk about a phase diagram, a plot that represents resistance as a function of electrondensity (on one axis) and temperature (on the other). In this phase diagram for magic angle-twisted bilayer graphene, the superconducting phase and the insulating phase are adjacent on the electron-density axis. Both the superconductivity and insulating states in magic angle-twisted bilayers of graphene occur only at cryogenic temperatures, a fraction of a degree above absolute zero (−273.15 degrees Celsius). But back in the 1980s, a similar phase diagram was noted in so-called high-temperature superconductors that operate at a much higher temperature—one to two hundred degrees above absolute zero, which is still cold, but not as cold as was thought to be needed to generate the superconducting and insulating states in twisted graphene.

"Physicists got very excited about this discovery, thinking that if these two systems are indeed similar, then perhaps studying twisted bilayer graphene could teach us something about high-temperature superconductivity," says Stevan Nadj-Perge, corresponding author of the paper and assistant professor of applied physics and materials science at Caltech. "Our new findings, however, question that similarity."

To achieve the magic angle usually requires such extreme precision in the placement of the two graphene sheets that only a few out of many samples will show the signature of superconductivity. The new approach developed at Caltech relaxes these stringent requirements. In the method, the graphene sheets are placed on top of another two-dimensional material that contains tungsten and selenide, called tungsten-diselenide (WSe2). The presence of tungsten enhances the coupling between an electron's "spin" (a property of subatomic particles that describes how they interact with magnetic fields) and its motion. The so-called spin–orbit coupling that is induced in twisted bilayer graphene may explain the stabilization of superconductivity.

When the additional WSe2 layers were used, the Caltech team found, superconductivity could exist even when insulating states were entirely absent. "This shows that superconductivity can be stabilized by tailoring the environment of the graphene layers," Nadj-Perge says.

"While we did observe signatures of spin–orbit coupling in our samples, whether this coupling is responsible for stabilization of superconductivity is still an open question. At this point, it is too early to say conclusively," Nadj-Perge says. "Our observations were quite unexpected. It implies that we only scratched the surface of graphene twistronics. These are exciting times for the field."

The research at Caltech was funded by the National Science Foundation, the United States Department of Energy, the Caltech-Gist memorandum of understanding program, the Kavli Nanoscience Institute, the Institute for Quantum Information and Matter at Caltech, the Walter Burke Institute for Theoretical Physics at Caltech, and the Kwanjeong Educational Foundation. 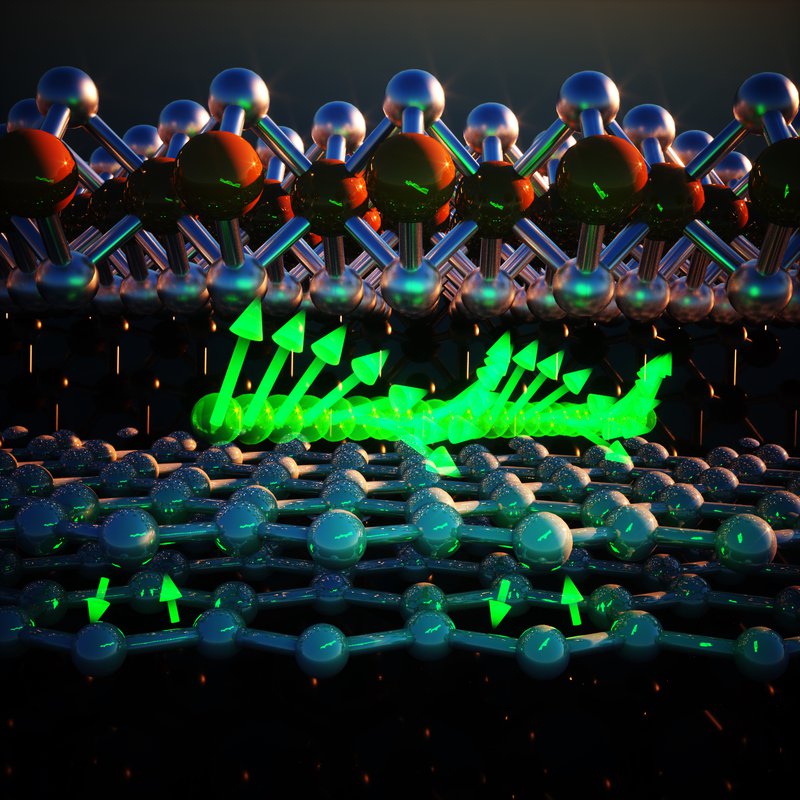 A microscopic side view of Twisted Bilayer Graphene (the two bottom layers) in contact with the 2D semiconductor – Tungsten Diselenide. The heavy Tungsten atoms in the semiconducting layer help couple the spin of electrons in graphene to their motion, as shown by the rotating arrows. Also visible are electrons in the graphene layers with the opposite spin that form "Cooper pairs" to give rise to superconductivity; which is observed in this structure for twist angles far outside the usual range.
Credit: Ella Maru Studio
Download Full Image
Subscribe
The Caltech Weekly