Devising the best treatment for a patient with cancer requires doctors to know something about the traits of the cancer from which the patient is suffering. But one of the greatest difficulties in treating cancer is that cancer cells are not all the same. Even within the same tumor, cancer cells can differ in their genetics, behavior, and susceptibility to chemotherapy drugs.

Cancer cells are generally much more metabolically active than healthy cells, and some insights into a cancer cell's behavior can be gleaned by analyzing its metabolic activity. But getting an accurate assessment of these characteristics has proven difficult for researchers. Several methods, including position emission tomography (or PET) scans, fluorescent dyes, and contrasts have been used, but each has drawbacks that limit their usefulness.

Caltech's Lihong Wang believes he can do better through the use of photoacoustic microscopy (PAM), a technique in which laser light induces ultrasonic vibrations in a sample. Those vibrations can be used to image cells, blood vessels, and tissues.

Wang, Bren Professor of Medical Engineering and Electrical Engineering, is using PAM to improve on an existing technology for measuring the oxygen-consumption rate (OCR) in collaboration with Professor Jun Zou at Texas A&M University. That existing technology takes many cancer cells and places them each into individual "cubbies" filled with blood. Cells with higher metabolisms will use up more oxygen and will lower the blood oxygen level, a process which is monitored by a tiny oxygen sensor placed inside each cubby.

This method, like those previously mentioned, has weaknesses. To get a meaningful sample size of metabolic data for cancer cells would require researchers to embed thousands of sensors into a grid. Additionally, the presence of the sensors within the cubbies can alter the metabolic rates of the cells, causing the collected data to be inaccurate.

Wang's improved version does away with the oxygen sensors and instead uses PAM to measure the oxygen level in each cubby. He does this with laser light that is tuned to a wavelength that the hemoglobin in blood absorbs and converts into vibrational energy—sound. As a hemoglobin molecule becomes oxygenated, its ability to absorb light at that wavelength changes. Thus, Wang is able to determine how oxygenated a sample of blood is by "listening" to the sound it makes when illuminated by the laser. He calls this single-cell metabolic photoacoustic microscopy, or SCM-PAM.

In a new paper, Wang and his co-authors show that SCM-PAM represents a huge improvement in the ability to assess the OCR of cancer cells. Using individual oxygen sensors to measure OCR limited researchers to analyzing roughly 30 cancer cells every 15 minutes. Wang's SCM-PAM improves that by two orders of magnitude and allows researchers to analyze around 3,000 cells in about 15 minutes.

"We have techniques to improve the throughput further by orders of magnitude, and we hope this new technology can soon help physicians make informed decisions on cancer prognosis and therapy," says Wang.

Funding for the research was provided by the National Science Foundation and the National Institutes of Health. 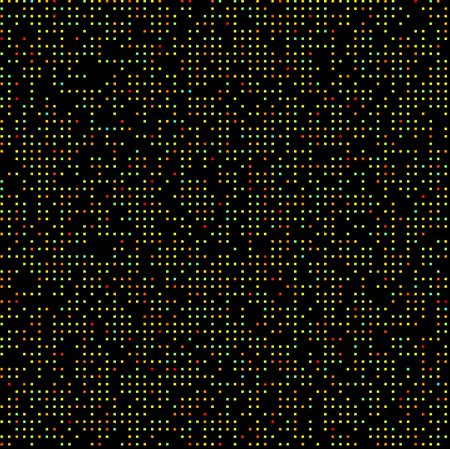 A scanned image of a grid containing one cancer cell and some blood inside each colored box. The color of the boxes indicates the amount of oxygen dissolved in the blood. Credit: Caltech 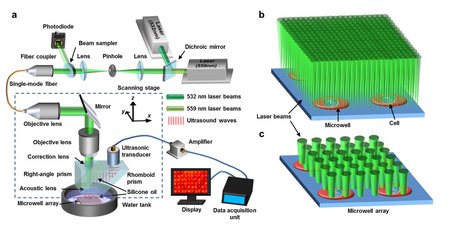