Kornfield and Dervan named to National Academy of Inventors

Two members of Caltech's Division of Chemistry and Chemical Engineering, Julia A. Kornfield and Peter B. Dervan, have been named fellows of the National Academy of Inventors (NAI). According to the NAI, election as a fellow is the highest professional distinction accorded to academic inventors "who have demonstrated a prolific spirit of innovation in creating or facilitating outstanding inventions that have made a tangible impact on quality of life, economic development and the welfare of society."

Kornfield (BS '83), professor of chemical engineering, has focused her research on understanding how the molecular structures of polymers create the polymers' macroscopic properties. Her research has led to, among other things, a jet fuel additive that can lessen the intensity of explosions during accidents or terrorist acts. She is a fellow of the American Association for the Advancement of Science and the American Physical Society, and the recipient of the Dillon Medal of the American Physical Society. 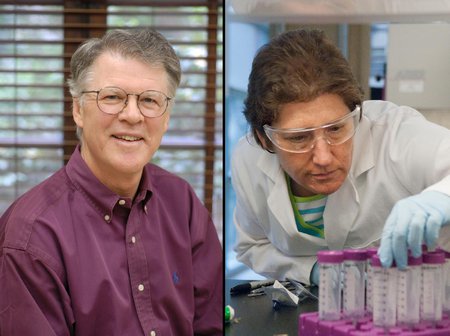 Peter B. Dervan (left), and Julia A. Kornfield (right) have been named fellows of the National Academy of Inventors. Credit: Caltech
Image Lightbox
Subscribe
The Caltech Weekly