Photoacoustic imaging, a technique for examining living materials through the use of laser light and ultrasonic sound waves, has many potential applications in medicine because of its ability to show everything from organs to blood vessels to tumors.

Caltech's Lihong Wang, a pioneer in the field, has developed variants of photoacoustic imaging that can show organs moving in real time, develop three-dimensional (3-D) images of internal body parts, and even differentiate cancerous cells from healthy cells.

Wang, Bren Professor of Medical Engineering and Electrical Engineering, has now further advanced photoacoustic imaging technology with what he calls Photoacoustic Topography Through an Ergodic Relay (PATER), which aims to simplify the equipment required for imaging of this type.

To explain how PATER works, some background information is needed. Photoacoustic imaging works by sending a pulse of laser light into the tissue to be examined. When the light strikes molecules in the tissue, it causes them to vibrate, creating ultrasonic waves that travel through the tissue until they are picked up by a type of sensor called a transducer that is pressed against the tissue's surface. The signals detected by the transducers are processed by a computer to create an image of the internal structure of the tissue.

This system works, but in order to develop a clear image, multiple sensors are required. One iteration of the technology uses 512 sensors that all need to be pressed against the tissue at one time.

"Every point on the surface has to be covered by an array of transducers, and that's kind of costly to build," Wang says. "We're thinking about how to make our system cheaper, and wearable. It's hard to make an array compact enough to wear."

Making the system cheaper and more compact means using fewer sensors, but that would make it difficult to collect enough data to develop an image. Now, Wang and his research team have found a workaround: a so-called ergodic relay.

The system Wang designed with 512 sensors is similar to the store with many cash registers. All of the sensors are working at the same time, with each taking in part of the data about the ultrasonic vibrations generated by the laser pulse.

Since the ultrasonic vibrations from the system come in one short burst, a single sensor would be overwhelmed if it were used to try and collect all the data in that short amount of time. That's where the ergodic relay comes in.

As Wang describes it, an ergodic relay is a sort of chamber around which sound can echo. When the ultrasonic vibrations pass through the ergodic relay, they are stretched out in time. To return to the cash-register metaphor, it would be like having another employee assisting the single cashier by telling the customers to walk a few laps around the store until the cashier is ready to see them, so the cashier does not become overwhelmed.

Wang says that this first version of the PATER system is able to generate 2-D images but cannot yet generate 3-D images like some of his other photoacoustic systems. He adds that the system, when mature, might also be useful for other medical purposes besides just imaging tissues and bodily structures.

"We could maybe use it for sensing glucose levels of diabetic patients if we use the wavelength of light absorbed by glucose," he says. "Perhaps we could run lipid panels? We can sense all sorts of chemicals if we tune the system for these molecules." 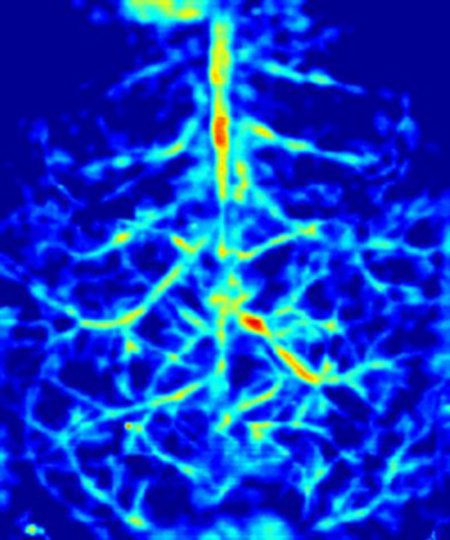