Skip to main content
Home  /  About  /  News  /  What Happened to Mars's Water? It is Still Trapped There

What Happened to Mars's Water? It is Still Trapped There

Billions of years ago, the Red Planet was far more blue; according to evidence still found on the surface, abundant water flowed across Mars and forming pools, lakes, and deep oceans. The question, then, is where did all that water go?

The answer: nowhere. According to new research from Caltech and JPL, a significant portion of Mars's water—between 30 and 99 percent—is trapped within minerals in the planet's crust. The research challenges the current theory that the Red Planet's water escaped into space.

The Caltech/JPL team found that around four billion years ago, Mars was home to enough water to have covered the whole planet in an ocean about 100 to 1,500 meters deep; a volume roughly equivalent to half of Earth's Atlantic Ocean. But, by a billion years later, the planet was as dry as it is today. Previously, scientists seeking to explain what happened to the flowing water on Mars had suggested that it escaped into space, victim of Mars's low gravity. Though some water did indeed leave Mars this way, it now appears that such an escape cannot account for most of the water loss.

"Atmospheric escape doesn't fully explain the data that we have for how much water actually once existed on Mars," says Caltech PhD candidate Eva Scheller (MS '20), lead author of a paper on the research that was published by the journal Science on March 16 and presented the same day at the Lunar and Planetary Science Conference (LPSC). Scheller's co-authors are Bethany Ehlmann, professor of planetary science and associate director for the Keck Institute for Space Studies; Yuk Yung, professor of planetary science and JPL senior research scientist; Caltech graduate student Danica Adams; and Renyu Hu, JPL research scientist. Caltech manages JPL for NASA.

The team studied the quantity of water on Mars over time in all its forms (vapor, liquid, and ice) and the chemical composition of the planet's current atmosphere and crust through the analysis of meteorites as well as using data provided by Mars rovers and orbiters, looking in particular at the ratio of deuterium to hydrogen (D/H).

Water is made up of hydrogen and oxygen: H2O. Not all hydrogen atoms are created equal, however. There are two stable isotopes of hydrogen. The vast majority of hydrogen atoms have just one proton within the atomic nucleus, while a tiny fraction (about 0.02 percent) exist as deuterium, or so-called "heavy" hydrogen, which has a proton and a neutron in the nucleus.

The lighter-weight hydrogen (also known as protium) has an easier time escaping the planet's gravity into space than its heavier counterpart. Because of this, the escape of a planet's water via the upper atmosphere would leave a telltale signature on the ratio of deuterium to hydrogen in the planet's atmosphere: there would be an outsized portion of deuterium left behind.

When water interacts with rock, chemical weathering forms clays and other hydrous minerals that contain water as part of their mineral structure. This process occurs on Earth as well as on Mars. Because Earth is tectonically active, old crust continually melts into the mantle and forms new crust at plate boundaries, recycling water and other molecules back into the atmosphere through volcanism. Mars, however, is mostly tectonically inactive, and so the "drying" of the surface, once it occurs, is permanent.

"Atmospheric escape clearly had a role in water loss, but findings from the last decade of Mars missions have pointed to the fact that there was this huge reservoir of ancient hydrated minerals whose formation certainly decreased water availability over time," says Ehlmann.

"All of this water was sequestered fairly early on, and then never cycled back out," Scheller says. The research, which relied on data from meteorites, telescopes, satellite observations, and samples analyzed by rovers on Mars, illustrates the importance of having multiple ways of probing the Red Planet, she says.

Ehlmann, Hu, and Yung previously collaborated on research that seeks to understand the habitability of Mars by tracing the history of carbon, since carbon dioxide is the principal constituent of the atmosphere. Next, the team plans to continue to use isotopic and mineral composition data to determine the fate of nitrogen and sulfur-bearing minerals. In addition, Scheller plans to continue examining the processes by which Mars's surface water was lost to the crust using laboratory experiments that simulate Martian weathering processes, as well as through observations of ancient crust by the Perseverance rover. Scheller and Ehlmann will also aid in Mars 2020 operations to collect rock samples for return to Earth that will allow the researchers and their colleagues to test these hypotheses about the drivers of climate change on Mars. 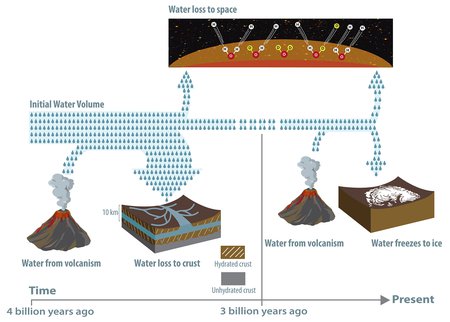 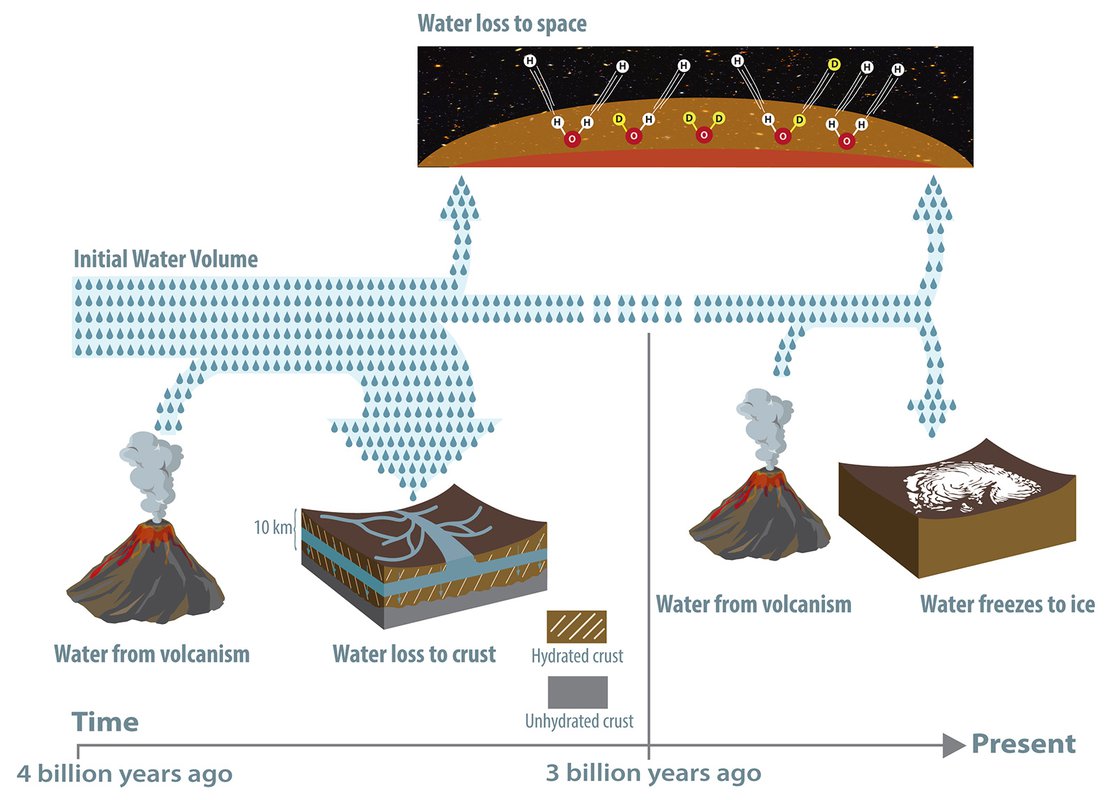