Tracking Down the "Missing" Carbon From the Martian Atmosphere

Mars is blanketed by a thin, mostly carbon dioxide atmosphere—one that is far too thin to prevent large amounts of water on the surface of the planet from subliming or evaporating. But many researchers have suggested that the planet was once shrouded in an atmosphere many times thicker than Earth's. For decades that left the question, "Where did all the carbon go?"

Now a team of scientists from Caltech and JPL thinks they have a possible answer. The researchers suggest that 3.8 billion years ago, Mars might have had only a moderately dense atmosphere. They have identified a photochemical process that could have helped such an early atmosphere evolve into the current thin one without creating the problem of "missing" carbon and in a way that is consistent with existing carbon isotopic measurements.

The scientists describe their findings in a paper that appears in the November 24 issue of the journal Nature Communications.

"With this new mechanism, everything that we know about the martian atmosphere can now be pieced together into a consistent picture of its evolution," says Renyu Hu, a postdoctoral scholar at JPL, a visitor in planetary science at Caltech, and lead author on the paper.

When considering how the early martian atmosphere might have transitioned to its current state, there are two possible mechanisms for the removal of excess carbon dioxide (CO2). Either the CO2 was incorporated into minerals in rocks called carbonates or it was lost to space.

A separate recent study coauthored by Bethany Ehlmann, assistant professor of planetary science and a research scientist at JPL, used data from several Mars-orbiting satellites to inventory carbonate rocks, showing that there are not enough carbonates in the upper kilometer of crust to contain the missing carbon from a very thick early atmosphere that might have existed about 3.8 billion years ago.

To study the escape-to-space scenario, scientists examine the ratio of carbon-12 and carbon-13, two stable isotopes of the element carbon that have the same number of protons in their nuclei but different numbers of neutrons, and thus different masses. Because various processes can change the relative amounts of those two isotopes in the atmosphere, "we can use these measurements of the ratio at different points in time as a fingerprint to infer exactly what happened to the martian atmosphere in the past," says Hu.

To establish a starting point, the researchers used measurements of the carbon isotope ratio in martian meteorites that contain gases that originated deep in the planet's mantle. Because atmospheres are produced by outgassing of the mantle through volcanic activity, these measurements provide insight into the isotopic ratio of the original martian atmosphere.

The scientists then compared those values to isotopic measurements of the current martian atmosphere recently collected by NASA's Curiosity rover. Those measurements show the atmosphere to be unusually enriched in carbon-13.

Previously, researchers thought the main way that martian carbon would be ejected into space was through a process called sputtering, which involves interactions between the solar wind and the upper atmosphere. Sputtering causes some particles—slightly more of the lighter carbon-12 than the heavier carbon-13—to escape entirely from Mars, but this effect is small. So there had to be some other process at work.

That is where the new mechanism comes in. In the study, the researchers describe a process that begins with a particle of ultraviolet light from the sun striking a molecule of CO2 in the upper atmosphere. That molecule absorbs the photon's energy and divides into carbon monoxide (CO) and oxygen. Then another ultraviolet particle hits the CO, causing it to dissociate into atomic carbon (C) and oxygen. Some carbon atoms produced in this way have enough energy to escape the atmosphere, and the new study shows that carbon-12 is far more likely to escape than carbon-13.

Modeling the long-term effects of this ultraviolet photodissociation mechanism coupled with volcanic gas release, loss via sputtering, and loss to carbonate rock formation, the researchers found that it was very efficient in terms of enriching carbon-13 in the atmosphere. Using the isotopic constraints, they were then able to calculate that the atmosphere 3.8 billion years ago might have had the pressure of Earth's or less under most scenarios.

"The efficiency of this new mechanism shows that there is in fact no discrepancy between Curiosity's measurements of the modern enriched value for carbon in the atmosphere and the amount of carbonate rock found on the surface of Mars," says Ehlmann, also a coauthor on the new study. "With this mechanism, we can describe an evolutionary scenario for Mars that makes sense of the apparent carbon budget, with no missing processes or reservoirs."

The authors conclude their work by pointing out several tests and refinements for the model. For example, future data from the ongoing Mars Atmosphere and Volatile EvolutioN (MAVEN) mission could provide the isotope fractionation of presently ongoing atmospheric loss to space and improve the extrapolation to early Mars.

Hu emphasizes that the work is an excellent example of multidisciplinary effort. On the one hand, he says, the team looked at the atmospheric chemistry—the isotopic signature, the escape processes, and the enrichment mechanism. On the other, they used geological evidence and remote sensing of the martian surface. "By putting these together, we were able to come up with a summary of evolutionary scenarios," says Hu. "I feel that Caltech/JPL is a unique place where we have the multidisciplinary capability and experience to make this happen." 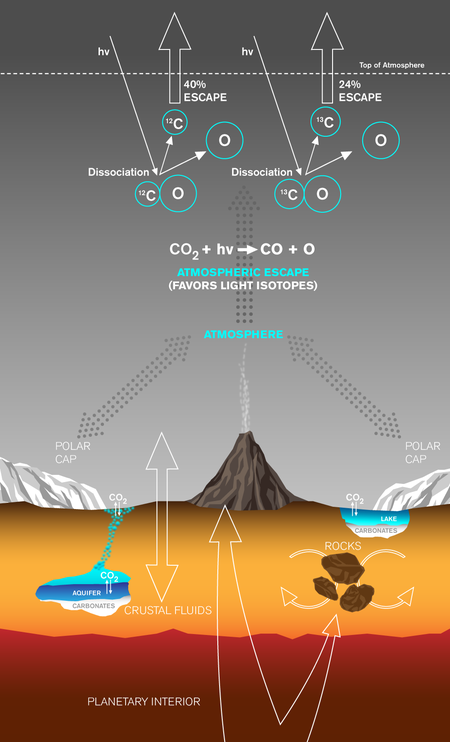 Carbon exchange and loss processes on Mars. Once in the atmosphere, CO2 can exchange with the polar caps or dissolve into waters, which can precipitate out solid carbonatess. CO2 in the atmosphere is lost to space at a rate controlled in part by the sun's activity. Through the mechanism described in the study, UV radiation encounters a CO2 molecule and produces CO and then C atoms. Since C-12 is more easily removed than the heavier C-13, the current martian atmosphere is enriched in C-13. Credit: Lance Hayashida/Caltech Office of Strategic Communications
Image Lightbox 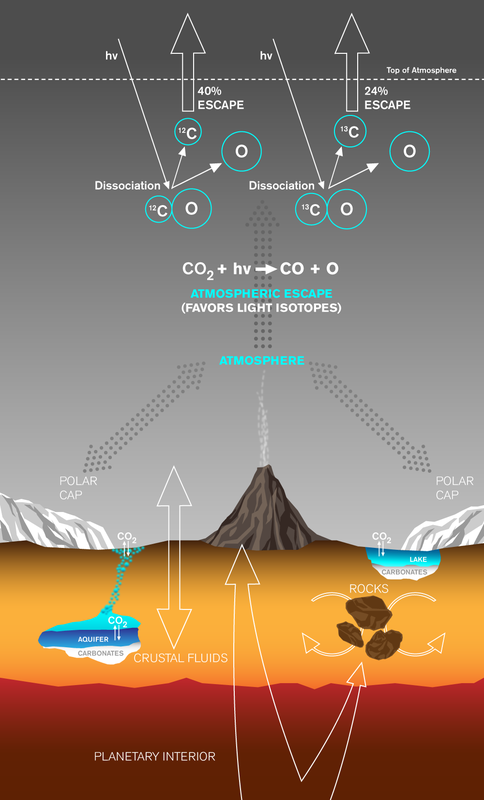 Carbon exchange and loss processes on Mars. Once in the atmosphere, CO2 can exchange with the polar caps or dissolve into waters, which can precipitate out solid carbonatess. CO2 in the atmosphere is lost to space at a rate controlled in part by the sun's activity. Through the mechanism described in the study, UV radiation encounters a CO2 molecule and produces CO and then C atoms. Since C-12 is more easily removed than the heavier C-13, the current martian atmosphere is enriched in C-13.
Credit: Lance Hayashida/Caltech Office of Strategic Communications
Download Full Image
Subscribe
The Caltech Weekly