How cells develop and the diseases that arise when development goes wrong have been a decades-long research focus in the laboratory of Distinguished Professor of Biology Ellen Rothenberg. In particular, the lab studies the development of immune cells known as T cells, which act as "intelligence agents"—they circulate throughout the body, detect threats, and determine what kind of response the immune system should make. However, when the many stages of T cell development do not occur perfectly, leukemia occurs.

"Many of the genes that we study in normal developing T cells are the same genes that, when regulated incorrectly, lead to the cells becoming T-cell leukemia," says Rothenberg. "Understanding the precision of this process is really important. There's also an interesting aspect of irreversibility: Some of the genes we study only have activity at a specific time period in development, and then they turn off forever. But in leukemia, we see that these genes 'leak' back on again at a later stage when they are supposed to be off. We want to know the details of the process for turning genes on and keeping genes off, which will help us understand what goes wrong in leukemia."

Now, a new study from the Rothenberg lab examines certain proteins that supervise gene regulation in developing T cells and finds that these proteins behave in a manner quite different from that assumed in previous theory. The work suggests that theories of gene regulation may need to be reevaluated.

Nearly every cell in the human body contains the same copy of the genome, but differences in the expression of particular genes give rise to different cell types, like muscles, neurons, and immune system cells. Gene expression can be thought of like a light bulb with a dimmer switch. Similar to how a light bulb on a dimmer switch can be turned on brightly, or dimly, or not at all, a gene can be expressed strongly, weakly, or be silenced. The "hands" that adjust these genomic dimmer switches are proteins called transcription factors, which bind to the genome to dial expression up or down.

"The Runx transcription factors have traditionally been underappreciated in these early T cells—they are present in the cell at constant, steady levels throughout development, so scientists have reasoned that they must be unimportant in regulating genes that need to change in expression dramatically over time," says Rothenberg.

In previous studies, other researchers experimentally knocked out one of the Runx factors and subsequently found that little changed in the cell, leading to the conclusion that Runx was not very important. But in this new study, Rothenberg's team found that the two Runx transcription factors cover for each other, so that effects only show up when they are both removed—and those results now show that these transcription factors behave in very unexpected ways.

The conventional genetics theory is that when a factor regulates a target gene, the activity of the factor is correlated with the level of the target gene. But Rothenberg's study found that this was not the case for Runx factors. Although the Runx factors themselves stay active at steady levels through key developmental events, the great majority of genes that respond to the Runx factors change dramatically in expression during this period. In fact, the Runx factors act upon "incredibly important" genes for T cell development, according to Rothenberg, and regulate them strongly.

The findings open up new questions, such as how can the Runx factors cause these dramatic changes in gene expression when levels of Runx themselves do not change?

The team also found that the positions where the Runx factors bind to the genome change markedly over time, bringing Runx to different target DNA sites. At any one time, the study found, the factors are only acting on a fraction of the genes they could regulate; they shift their "attention" from one set to another over time. Interestingly, in many of these shifts, large groups of Runx proteins leave their initial sites and travel to occupy clusters of new sites grouped across large distances of the genome, as they act on different genes at different times.

"There's no good explanation yet for this group behavior, and we find that Runx are interacting with the physical genomic architecture in a complex way, as they're regulating genes that have totally different expression patterns than the transcription factors themselves," says Shin. "What is controlling the deployment of the transcription factors? We still don't know, and it's far more interesting than what we thought."

"This work has big implications for researchers trying to model gene networks and shows that transcription factors are more versatile in their actions than people have assumed," Rothenberg says. 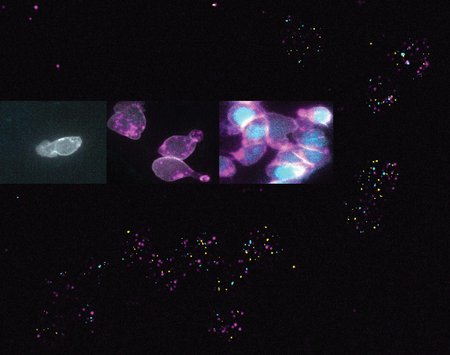