Choosing a Career as an Immune Cell

How do individual developing cells choose and commit to their "identity"—to become, for example, an immune cell, or a muscle cell, or a neuron?

T-lymphocytes are cells in the immune system that act as "intelligence agents"—they circulate throughout the body, detect threats, and determine what kind of response the immune system should make. These cells are crucial in certain cancer therapies in which they are persuaded to attack cancerous cells.

When a stem cell finalizes its decision to develop into a T-lymphocyte, a particular gene called Bcl11b turns on and stays on. There is a drastic difference in gene expression patterns and in developmental options between cells that have activated Bcl11b and those that haven't. The gene's activation signals a turning point, a commitment to the T-lymphocyte developmental path. But what is Bcl11b doing to create such profound changes?

Now, a Caltech-led team of scientists has revealed the mechanisms that enable Bcl11b to affect gene regulation in order to control a cell's commitment to developing into a T-lymphocyte. The work was done in the laboratory of Ellen Rothenberg, Albert Billings Ruddock Professor of Biology. A paper describing the research appeared online on October 30 in the journal Nature Immunology.

"These findings should be valuable both for immunologists seeking to understand the diversity and stability of different immune cell types and for researchers interested in how to read the regulatory code in the genome and use it to predict development," says Rothenberg. "Our findings emphasize that development does not just turn on and off single regulatory factors, but also it makes new ensembles of regulatory factors available to modify the action of pre-existing factors. Our study shows that it is the ensembles of these factors that are crucial to characterize in order to explain the cells' behavior."

Bcl11b and its partners play roles not only in a variety of immune functions but also in the processes that prevent the development of leukemia. These new findings should offer ways to one day improve cell engineering and possibly even to reverse some tumor characteristics.

Bcl11b is a gene regulation protein: It binds to specific regions on the genome in order to modulate gene expression—that is, to tune up or down the levels of particular genes. The Bcl11b gene is activated for the first time in a cell's lifetime as an immature stem cell goes through a "commitment" process of becoming a T-lymphocyte, and the gene continues to be expressed throughout the cell's lifetime. This new research demonstrates how the Bcl11b protein works to enforce commitment and, more broadly, how the genome controls development.

The first question Rothenberg and her team sought to answer was where on the genome Bcl11b works. The Bcl11b protein is found "hanging around," binding to DNA throughout the genome, Rothenberg says, but the target genes for which Bcl11b binding actually impacts gene expression were not clear before this work. The new research demonstrates, however, that the question could be answered by looking at how Bcl11b operates as a partner of other proteins in gene-regulation complexes. It is not sufficient to simply find locations on the genome where Bcl11b directly binds—the best clues have come from identifying sites where Bcl11b protein is needed to "recruit" other partner proteins to bind with it.

Secondly, the team showed that Bcl11b works indirectly to affect a complex cascade of gene regulation in order to force a cell to commit to the T-lymphocyte developmental path. For example, a gene called E2A, active during immune cell development, produces a protein with totally different functions than Bcl11b. Though Bcl11b does not directly bind to the E2A gene, the new research shows that Bcl11b indirectly helps E2A by suppressing another protein which actively interferes with E2A.

"Bcl11b has direct and indirect partnerships with other proteins throughout the genome—it can directly increase or decrease their production, which in turn indirectly tunes the levels of other affected proteins," says Rothenberg. "Gene regulatory protein activities depend not only on their own expression but also on the presence or absence of other factors that collaborate with them in a network. These dynamic partnerships are crucial to explain development." 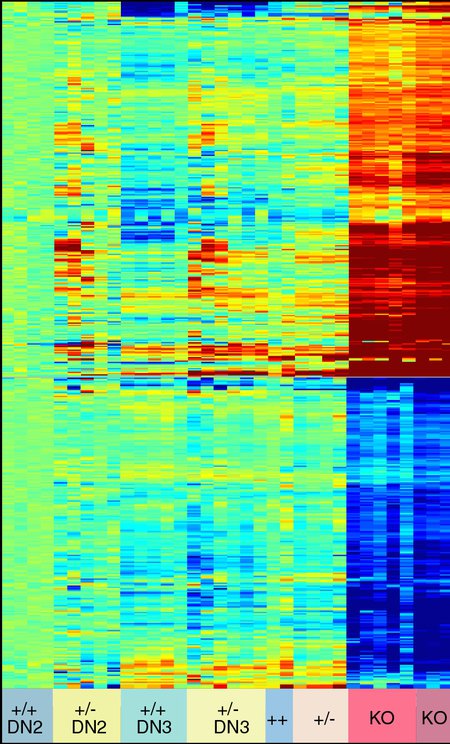 This "heat map" figure shows how removing Bcl11b affects gene expression at the stage when Bcl11b first begins to work. Each column of colored lines shows data from a different mouse, and the key at the bottom shows whether the mouse had both copies of its Bcl11b gene intact (+/+), just one copy intact (+/-), or both copies deleted (KO). Each horizontal line represents a gene—red indicates expression increased, blue indicates expression decreased. Credit: Courtesy of Maile Romero-Wolf
Image Lightbox 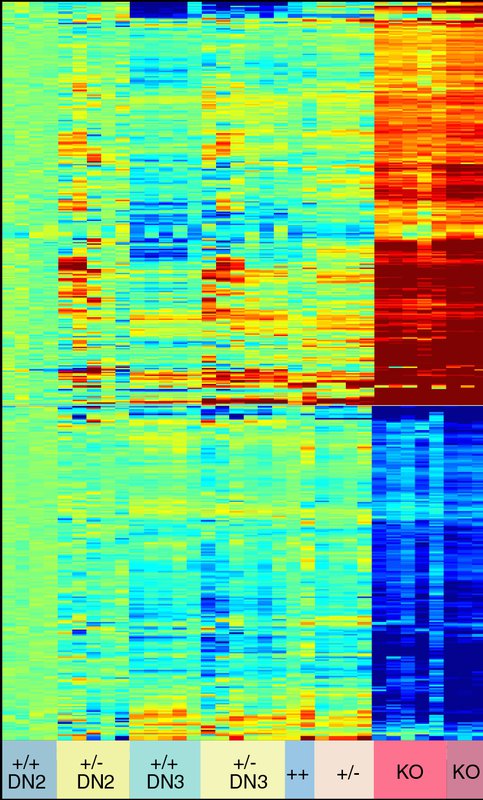 This "heat map" figure shows how removing Bcl11b affects gene expression at the stage when Bcl11b first begins to work. Each column of colored lines shows data from a different mouse, and the key at the bottom shows whether the mouse had both copies of its Bcl11b gene intact (+/+), just one copy intact (+/-), or both copies deleted (KO). Each horizontal line represents a gene—red indicates expression increased, blue indicates expression decreased.
Credit: Courtesy of Maile Romero-Wolf
Download Full Image
Subscribe
The Caltech Weekly