Caltech researchers have developed a technique that combines fluorescence and ultrasound to peer through opaque media, such as biological tissue.

"We hope that one day this method can be deployed to extend the operating depth of fluorescence microscopy and help image fluorescent labeled cells deep inside living animals," says Changhuei Yang, Thomas G. Myers Professor of Electrical Engineering, Bioengineering, and Medical Engineering, and senior author of a paper about the technique, dubbed fluorescence and ultrasound-modulated light correlation (FLUX for short, with the "X" for "correlation"), that was published on May 11 in Nature Photonics.

Yang and his colleagues at Caltech's Biophotonics Lab found a possible solution to the problem that takes advantage of the random blinking of fluorescent objects that occurs when a laser beam is used to excite a fluorescent target in a so-called dynamic sample, such as living tissue.

The blinking is caused by the random fluctuation of the excitation light, known as dynamic laser speckle, which occurs when moving particles in a medium—such as blood cells flowing through the blood vessels permeating biological tissue—scatter and reflect light. This causes constructive and destructive interference of the light waves exciting the fluorescent targets at different times, thus causing the targets to blink.

To do this, the team used a high-frequency focused ultrasound beam. Instead of measuring the echo of an ultrasound wave, as would occur in conventional ultrasound imaging, the team instead uses an ultrasound beam as a virtual beacon thanks to a phenomenon known as the acousto-optic effect, in which the interaction of light and sound waves causes the color of laser light to change.

"The dynamic property of the sample has been considered as a road block in deep tissue fluorescence imaging. Here we turn this problem into an enabling mechanism for fluorescence imaging in dynamic samples," says Haowen Ruan, postdoctoral scholar and co-first author of the Nature Photonics study.

The paper is titled "Fluorescence imaging through dynamic scattering media with speckle encoded ultrasound modulated light correlation." Co-authors include Caltech graduate students Jian Xu and Yujia Huang. Changhuei Yang is an affiliated faculty member with the Tianqiao and Chrissy Chen Institute for Neuroscience at Caltech. This research was supported by the Donna and Benjamin M. Rosen Bioengineering Center Endowment Fund and a gift from Kernel, LLC.

An artistic illustration of FLUX imaging, in which dynamic laser speckles shine on a fluorescent target, causing both the ultrasound “tagged” light and the fluorescent light to blink at the same pace. (Credit: Haowen Ruan and Yan Liu) 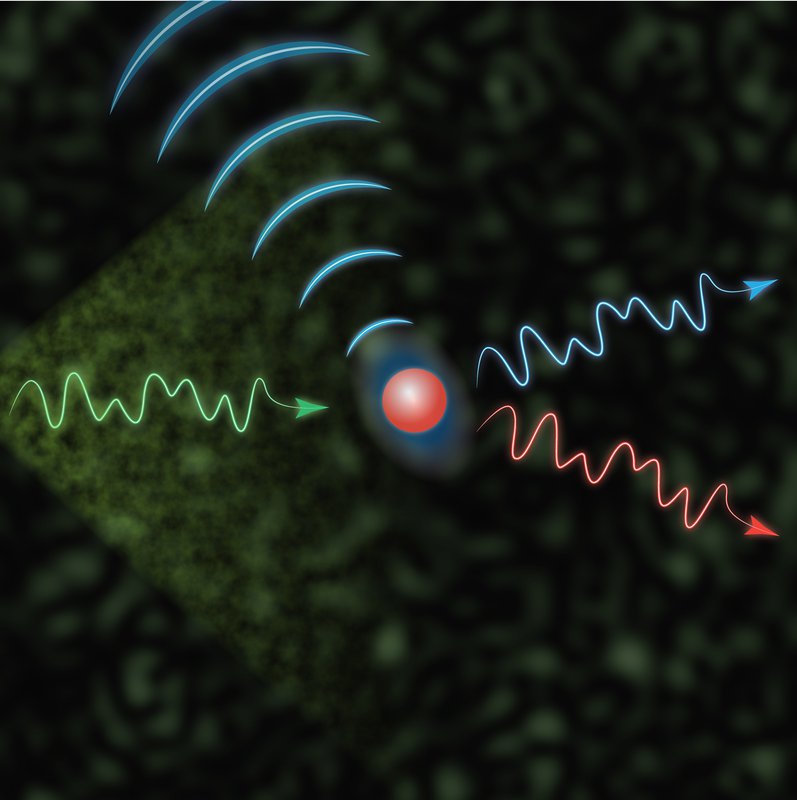