In the most extreme cases of epilepsy, when a patient's seizures are relentless and do not respond to other treatments, doctors may perform a surgery called a hemispherectomy to remove half of the patient's brain. Remarkably, many of these patients are cured of their seizures and possess basic motor, language, and cognitive skills.

In a new study in the journal Cell Reports, neuroscientists at Caltech describe an investigation of six of these rare patients that offers new insights into how human brains adapt to such extreme changes. The research team performed magnetic resonance imaging (MRI) scans on the patients, all of whom received the surgeries as children and now have relatively normal cognitive abilities. The patients' scans were compared to those of healthy individuals.

The results showed that brain networks in the hemispherectomy patients—networks that control walking, talking, and other functions—were remarkably intact.

"Despite missing an entire brain hemisphere, we found all the same major brain networks that you find in healthy brains with two hemispheres," says Dorit Kliemann, lead author of the new report and a postdoctoral scholar who works in the laboratory of Ralph Adolphs (PhD '93), the Bren Professor of Psychology, Neuroscience, and Biology, and the director of the Caltech Brain Imaging Center.

"It appears that the networks are collaborating more," says Kliemann. "The networks themselves do not look abnormal in these patients, but the level of connections between the networks is increased in all six patients."

"This pattern of functional organization is very robust, even when brain structure is atypical," says Lynn Paul, a senior research scientist and principal investigator on the hemispherectomy research program at Caltech. "For example, previously we found that individuals who are born without a corpus callosum—the bridge between the left and right sides of the brain—develop the common bilateral organization of functional networks, even though the primary structural connections between hemispheres aren't available. Now we know that this functional organization can also be retained unilaterally, when there is no possibility of connectivity between hemispheres."

The present study measured so-called resting-state activity in the brain, which means the patients did not do a specific task inside the MRI scanning machines. In the future, the researchers hope to explore how compensation in hemispherectomies influences behavior more directly. "What happens when there is a specific task or stimulus, such as touch on the left or the right hand?" says Paul. "While many of our functions are mirrored in each hemisphere, some are strongly lateralized to one hemisphere. How will these lateralized functions be reorganized after hemispherectomy?"

"Left touch on the right side of the brain would normally be represented in the opposite hemisphere, for example," explains Adolphs. "But that can't work if you have only one hemisphere, and so there must be major reorganization of such functions."

The research was made possible by seed funding from The Brain Recovery Project: Childhood Epilepsy Surgery Foundation, a group started by the parents of a child who underwent a hemispherectomy. The goal of the organization is to provide more information for other parents in similar situations, in addition to providing funding for scientific research.

"This project demonstrates the power of families, scientists, and physicians coming together to make research possible," says Paul, who is a clinical psychologist as well as a cognitive neuroscientist by training. She says that one of the ultimate goals of these kind of studies is to help families and doctors make better-informed decisions about the surgeries and recovery processes.

"We hope that a better understanding of how the brain is compensating in people who have optimal outcomes will eventually inform targeted intervention strategies for future hemispherectomy patients," says Paul.

The team also hopes to track child patients before and after hemispherectomies to directly follow how their brains change over time.

Says Kliemann, "It's truly amazing what these patients can do. Yes, they have challenges, but their cognitive abilities are still remarkably high functioning given that they are missing half of the brain tissue. We need to understand how this is possible with only a single brain hemisphere—an important question about plasticity, reorganization, and compensation."

The Cell Reports study, titled, "Intrinsic functional connectivity of the brain in adults with a single cerebral hemisphere," was funded by The Brain Recovery Project: Childhood Epilepsy Surgery Foundation, the National Institutes of Health, and the National Science Foundation. Other co-authors include Michael Tyszka, Remya Nair, and Julien Dubois (PhD '13) of Caltech; Bruce Fischl of Massachusetts General Hospital and Harvard Medical School; and Thomas Yeo of the National University of Singapore. 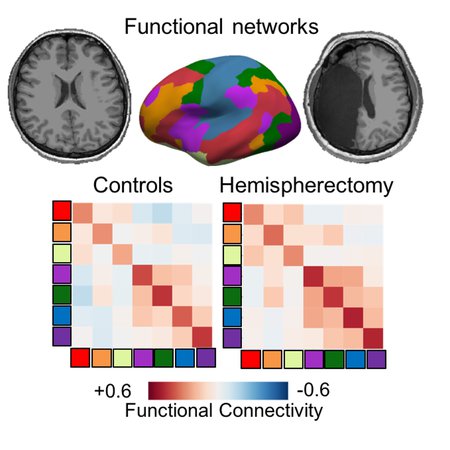 Share this
Tags
biological science & medicine neuroscience and behavioral science social science
Related Links
From the Break Through Campaign: How Does the Mind Arise from the Brain?   ＞
See All News   ＞