PASADENA, Calif.—Like a bridge that spans a river to connect two major metropolises, the corpus callosum is the main conduit for information flowing between the left and right hemispheres of our brains. Now, neuroscientists at the California Institute of Technology (Caltech) have found that people who are born without that link—a condition called agenesis of the corpus callosum, or AgCC—still show remarkably normal communication across the gap between the two halves of their brains.

Their findings are outlined in a paper published October 19 in The Journal of Neuroscience.

Our brains are never truly at rest. Even when we daydream, there is a tremendous amount of communication happening between different areas in the brain. According to J. Michael Tyszka, lead author on the Journal of Neuroscience paper and associate director of the Caltech Brain Imaging Center, many areas of the brain display slowly varying patterns of activity that are similar to one another. The fact that these areas are synchronized has led many scientists to presume that they are all part of an interconnected network called a resting-state network. Much to their surprise, Tyszka and his team found that these resting-state networks look essentially normal in people with AgCC, despite the lack of connectivity.

The work used functional magnetic resonance imaging (fMRI) to demonstrate that synchronized activity between the left and right brain survives even this sort of radical rewiring of the nerve connections between the two hemispheres. The presence of symmetric patterns of activity in individuals born without a corpus callosum highlights the brain's remarkable plasticity and ability to compensate, says coauthor Lynn Paul, research staff member and lecturer in psychology at Caltech. "It develops these fundamental networks even when the left and right hemispheres are structurally disconnected."

The study that found the robust networks is part of an ongoing research program led by Paul, who has been studying AgCC for several decades. AgCC occurs in approximately one of every 4000 live births. The typical corpus callosum comprises almost 200 million axons—the connections between brain cells—and is the largest fiber bundle in the human brain. In AgCC, those fibers fail to cross the gap between the hemispheres during fetal development, forcing the two halves of the brain to communicate using more indirect and currently unknown means.

"In the 1960s and 1970s, Roger Sperry at Caltech studied 'split-brain' patients in whom the corpus callosum was surgically severed as a treatment for epilepsy," explains Paul. "Our research on AgCC has moved in a different direction and focuses on a naturally occurring brain malformation that occurs before birth. This allows us to examine how, and to what extent, the brain can compensate for the loss of the corpus callosum as a person grows to adulthood."

According to the team, the findings are especially valuable in light of current theories that link impaired brain connections with clinical conditions including autism and schizophrenia.

"We are now examining AgCC subjects who are also on the autism spectrum, in order to gain insights about the role of brain connectivity in autism, as well as in healthy social interactions," says Tyszka. "About a third of people with AgCC also have autism, and altered connectivity in the corpus callosum has been found in autism. The remarkable compensation in brain functional networks that we found here may thus have important implications also for understanding the function of the brains of people with autism."

The work in the paper, "Intact bilateral resting-state networks in the absence of the corpus callosum," was carried out in the laboratory of Ralph Adolphs, Bren Professor of Psychology and Neuroscience at Caltech, with the help of postdoctoral scholar Daniel Kennedy. It was supported by funding from the Gustavus and Louise Pfeiffer Research Foundation, the Simons Foundation, the National Institute of Mental Health, and the National Alliance for Research on Schizophrenia and Depression. 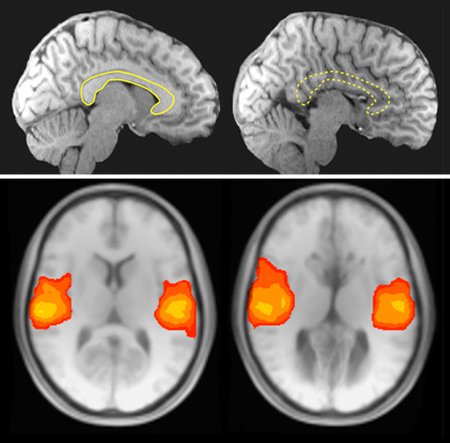 (Top) Magnetic resonance images comparing a healthy subject (left) with an AgCC patient (right). The corpus callosum is the thick, 'c'-shaped structure outlined in the healthy brain and missing from the AgCC brain. (Bottom) Functional magnetic resonance images highlight symmetric patterns of synchronized activity in both healthy (left) and AgCC subjects (right) during rest with eyes closed. More than 15 of this type of network were found to be preserved in AgCC subjects. Credit: California Institute of Technology
Image Lightbox 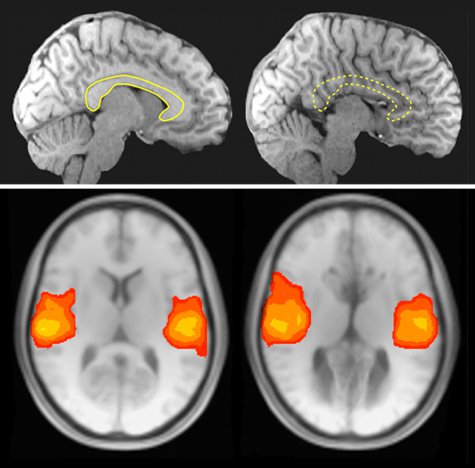 (Top) Magnetic resonance images comparing a healthy subject (left) with an AgCC patient (right). The corpus callosum is the thick, 'c'-shaped structure outlined in the healthy brain and missing from the AgCC brain. (Bottom) Functional magnetic resonance images highlight symmetric patterns of synchronized activity in both healthy (left) and AgCC subjects (right) during rest with eyes closed. More than 15 of this type of network were found to be preserved in AgCC subjects.
Credit: California Institute of Technology
Download Full Image
Subscribe
The Caltech Weekly