Nanoscale patterning could enable precise manipulation of objects on many scales.

Researchers at Caltech have designed a way to levitate and propel objects using only light, by creating specific nanoscale patterning on the objects' surfaces.

Though still theoretical, the work is a step toward developing a spacecraft that could reach the nearest planet outside of our solar system in 20 years, powered and accelerated only by light.

A paper describing the research appears online in the March 18 issue of the journal Nature Photonics. The research was done in the laboratory of Harry Atwater, Howard Hughes Professor of Applied Physics and Materials Science in Caltech's Division of Engineering and Applied Science.

Decades ago, the development of so-called optical tweezers enabled scientists to move and manipulate tiny objects, like nanoparticles, using the radiative pressure from a sharply focused beam of laser light. This work formed the basis for the 2018 Nobel Prize in Physics. However, optical tweezers are only able to manipulate very small objects and only at very short distances.

Ognjen Ilic, postdoctoral scholar and the study's first author, gives an analogy: "One can levitate a ping pong ball using a steady stream of air from a hair dryer. But it wouldn't work if the ping pong ball were too big, or if it were too far away from the hair dryer, and so on."

With this new research, objects of many different shapes and sizes—from micrometers to meters—could be manipulated with a light beam. The key is to create specific nanoscale patterns on an object's surface. This patterning interacts with light in such a way that the object can right itself when perturbed, creating a restoring torque to keep it in the light beam. Thus, rather than requiring highly focused laser beams, the objects' patterning is designed to "encode" their own stability. The light source can also be millions of miles away.

"We have come up with a method that could levitate macroscopic objects," says Atwater, who is also the director of the Joint Center for Artificial Photosynthesis. "There is an audaciously interesting application to use this technique as a means for propulsion of a new generation of spacecraft. We're a long way from actually doing that, but we are in the process of testing out the principles."

In theory, this spacecraft could be patterned with nanoscale structures and accelerated by an Earth-based laser light. Without needing to carry fuel, the spacecraft could reach very high, even relativistic speeds and possibly travel to other stars.

Atwater also envisions that the technology could be used here on Earth to enable rapid manufacturing of ever-smaller objects, like circuit boards.

The paper is titled "Self-stabilizing photonic levitation and propulsion of nanostructured macroscopic objects." Funding was provided by the Air Force Office of Scientific Research. 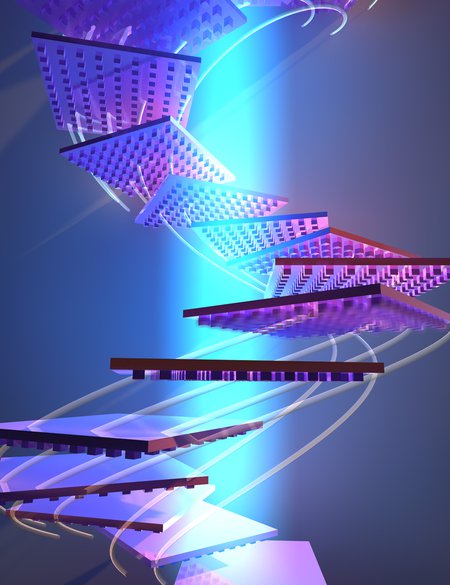 Conceptual illustration of a nano-patterned object reorienting itself to remain in a beam of light. Credit: Courtesy of the Atwater laboratory
Image Lightbox 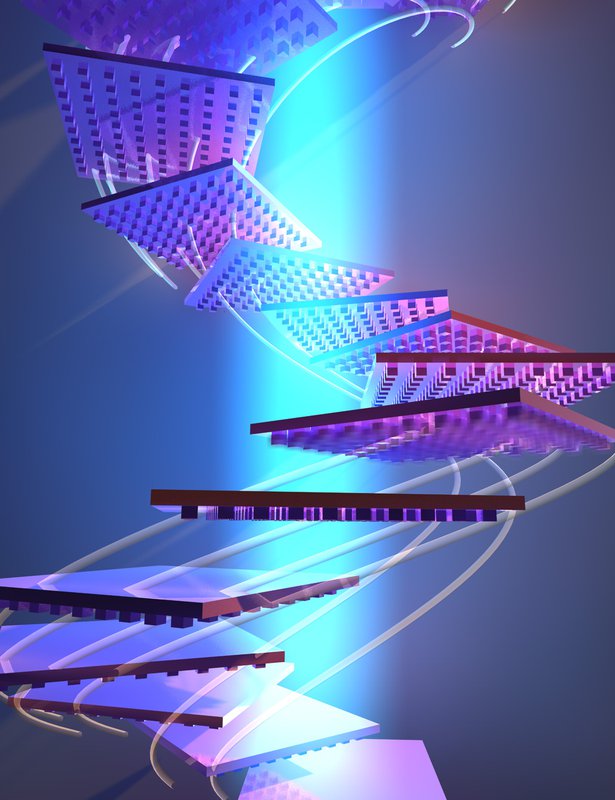 Conceptual illustration of a nano-patterned object reorienting itself to remain in a beam of light.
Credit: Courtesy of the Atwater laboratory
Download Full Image
Subscribe
The Caltech Weekly