For the first time, scientists have observed ripples in the fabric of spacetime called gravitational waves, arriving at the earth from a cataclysmic event in the distant universe. This confirms a major prediction of Albert Einstein's 1915 general theory of relativity and opens an unprecedented new window onto the cosmos.

Gravitational waves carry information about their dramatic origins and about the nature of gravity that cannot otherwise be obtained. Physicists have concluded that the detected gravitational waves were produced during the final fraction of a second of the merger of two black holes to produce a single, more massive spinning black hole. This collision of two black holes had been predicted but never observed.

The gravitational waves were detected on September 14, 2015 at 5:51 a.m. Eastern Daylight Time (09:51 UTC) by both of the twin Laser Interferometer Gravitational-wave Observatory (LIGO) detectors, located in Livingston, Louisiana, and Hanford, Washington, USA. The LIGO Observatories are funded by the National Science Foundation (NSF), and were conceived, built, and are operated by Caltech and MIT. The discovery, accepted for publication in the journal Physical Review Letters, was made by the LIGO Scientific Collaboration (which includes the GEO Collaboration and the Australian Consortium for Interferometric Gravitational Astronomy) and the Virgo Collaboration using data from the two LIGO detectors.

Based on the observed signals, LIGO scientists estimate that the black holes for this event were about 29 and 36 times the mass of the sun, and the event took place 1.3 billion years ago. About 3 times the mass of the sun was converted into gravitational waves in a fraction of a second—with a peak power output about 50 times that of the whole visible universe. By looking at the time of arrival of the signals—the detector in Livingston recorded the event 7 milliseconds before the detector in Hanford—scientists can say that the source was located in the Southern Hemisphere.

"With this discovery, we humans are embarking on a marvelous new quest: the quest to explore the warped side of the universe—objects and phenomena that are made from warped spacetime. Colliding black holes and gravitational waves are our first beautiful examples," says Thorne.

"The description of this observation is beautifully described in the Einstein theory of general relativity formulated 100 years ago and comprises the first test of the theory in strong gravitation. It would have been wonderful to watch Einstein's face had we been able to tell him," says Weiss.

"Caltech thrives on posing fundamental questions and inventing new instruments to answer them," says Caltech president Thomas Rosenbaum, the Sonja and William Davidow Presidential Chair and professor of physics. "LIGO represents an exhilarating example of how this approach can transform our knowledge of the universe. We are proud to partner with NSF and MIT and our other scientific collaborators to lead this decades-long effort."

"Our observation of gravitational waves accomplishes an ambitious goal set out over five decades ago to directly detect this elusive phenomenon and better understand the universe, and, fittingly, fulfills Einstein's legacy on the 100th anniversary of his general theory of relativity," says Caltech's David H. Reitze, executive director of the LIGO Laboratory.

"This discovery is just the beginning," says Fiona Harrison, the Benjamin M. Rosen Professor of Physics and holder of the Kent and Joyce Kresa Leadership Chair of the Division of Physics, Mathematics and Astronomy. "Over the next years, LIGO will be putting general relativity to its most stringent tests ever, it will be discovering new sources of gravitational waves, and we will be using telescopes on the ground and in space to search for light emitted by these catastrophic events."

The existence of gravitational waves was first demonstrated in the 1970s and 80s by Joseph Taylor, Jr., and colleagues. Taylor and Russell Hulse discovered in 1974 a binary system composed of a pulsar in orbit around a neutron star. Taylor and Joel M. Weisberg in 1982 found that the orbit of the pulsar was slowly shrinking over time because of the release of energy in the form of gravitational waves. For discovering the pulsar and showing that it would make possible this particular gravitational wave measurement, Hulse and Taylor were awarded the Nobel Prize in Physics in 1993.

The new LIGO discovery is the first observation of gravitational waves themselves, made by measuring the tiny disturbances the waves make to space and time as they pass through the earth.

LIGO research is carried out by the LIGO Scientific Collaboration (LSC), a group of more than 1000 scientists from universities around the United States and in 14 other countries. More than 90 universities and research institutes in the LSC develop detector technology and analyze data; approximately 250 students are strong contributing members of the collaboration. The LSC detector network includes the LIGO interferometers and the GEO600 detector. The GEO team includes scientists at the Max Planck Institute for Gravitational Physics (Albert Einstein Institute, AEI), Leibniz Universität Hannover, along with partners at the University of Glasgow, Cardiff University, the University of Birmingham, other universities in the United Kingdom, and the University of the Balearic Islands in Spain.

"This detection is the beginning of a new era: The field of gravitational wave astronomy is now a reality," says Gabriela González, LSC spokesperson and professor of physics and astronomy at Louisiana State University.

The discovery was made possible by the enhanced capabilities of Advanced LIGO, a major upgrade that increases the sensitivity of the instruments compared to the first generation LIGO detectors, enabling a large increase in the volume of the universe probed—and the discovery of gravitational waves during its first observation run. The US National Science Foundation leads in financial support for Advanced LIGO. Funding organizations in Germany (Max Planck Society), the U.K. (Science and Technology Facilities Council, STFC) and Australia (Australian Research Council) also have made significant commitments to the project. Several of the key technologies that made Advanced LIGO so much more sensitive have been developed and tested by the German UK GEO collaboration. Significant computer resources have been contributed by the AEI Hannover Atlas Cluster, the LIGO Laboratory, Syracuse University, and the University of Wisconsin-Milwaukee. Several universities designed, built, and tested key components for Advanced LIGO: The Australian National University, the University of Adelaide, the University of Florida, Stanford University, Columbia University of New York, and Louisiana State University.

"In 1992, when LIGO's initial funding was approved, it represented the biggest investment the NSF had ever made," says France Córdova, NSF director. "It was a big risk. But the National Science Foundation is the agency that takes these kinds of risks. We support fundamental science and engineering at a point in the road to discovery where that path is anything but clear. We fund trailblazers. It's why the U.S. continues to be a global leader in advancing knowledge."

"The Advanced LIGO detectors are a tour de force of science and technology, made possible by a truly exceptional international team of technicians, engineers, and scientists," says David Shoemaker of MIT, the project leader for Advanced LIGO. "We are very proud that we finished this NSF-funded project on time and on budget, and delighted Advanced LIGO delivered its groundbreaking detection so quickly."

At each observatory, the two-and-a-half-mile (4-km) long L-shaped LIGO interferometer uses laser light split into two beams that travel back and forth down the arms (four-foot diameter tubes kept under a near-perfect vacuum). The beams are used to monitor the distance between mirrors precisely positioned at the ends of the arms. According to Einstein's theory, the distance between the mirrors will change by an infinitesimal amount when a gravitational wave passes by the detector. A change in the lengths of the arms smaller than one-ten-thousandth the diameter of a proton (10-19 meter) can be detected.

Independent and widely separated observatories are necessary to determine the direction of the event causing the gravitational waves, and also to verify that the signals come from space and are not from some other local phenomenon.

A network of detectors will significantly help to localize the sources. The Virgo detector will be the first to join later this year.

The LIGO Laboratory also is working closely with scientists in India at the Inter-University Centre for Astronomy and Astrophysics, the Raja Ramanna Centre for Advanced Technology, and the Institute for Plasma to establish a third Advanced LIGO detector on the Indian subcontinent. Awaiting approval by the government of India, it could be operational early in the next decade. The additional detector will greatly improve the ability of the global detector network to localize gravitational-wave sources.

Virgo research is carried out by the Virgo Collaboration, consisting of more than 250 physicists and engineers belonging to 19 different European research groups: 6 from Centre National de la Recherche Scientifique (CNRS) in France; 8 from the Istituto Nazionale di Fisica Nucleare (INFN) in Italy; 2 in The Netherlands with Nikhef; the Wigner RCP in Hungary; the POLGRAW group in Poland, and the European Gravitational Observatory (EGO), the laboratory hosting the Virgo detector near Pisa in Italy. 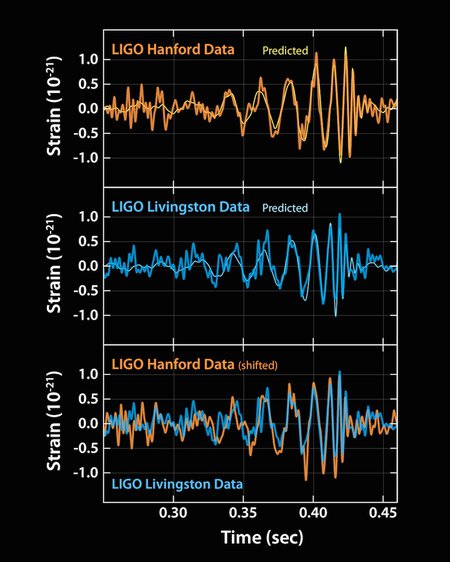 The plots show signals of gravitational waves detected by the twin LIGO observatories. The signals came from two merging black holes 1.3 billion light-years away. The top two plots show data received at each detector, along with waveforms predicted by general relativity. The X-axis plots time, the Y-axis strain—the fractional amount by which distances are distorted. The LIGO data match the predictions very closely. The final plot compares data from both facilities, confirming the detection. Credit: LIGO A computer simulation shows the collision of two black holes, a tremendously powerful event detected for the first time ever by the Laser Interferometer Gravitational-Wave Observatory, or LIGO. LIGO detected gravitational waves, or ripples in space and time, generated as the black holes merged. The simulation shows what the merger would look like if we could somehow get a closer look. Time has been slowed by a factor of 100. The stars appear warped due to the strong gravity of the black holes. Credit: SXS On September 14, 2015, LIGO observed ripples in the fabric of spacetime. This video narrative tells the story of the science behind that important detection. Credit: Caltech LIGO Scientist David Reitze takes us on a 1.3 billion year journey that begins with the violent merger of two black holes in the distant universe. The event produced gravitational waves, tiny ripples in the fabric of space, that LIGO detected on September 14, 2015 as they passed the Earth. Credit: LIGO/SXS/R. Hurt and T. Pyle Gravitational waves from a pair of colliding black holes are converted to sound waves in this animation. On September 14, 2015, LIGO observed gravitational waves from the merger of two black holes. In the animation's first two runs, the sound-wave frequencies match the frequencies of the gravitational waves. The second two replay the sounds at higher frequencies that better fit human hearing. The animation ends by playing the original frequencies again twice. Scientists call such events chirps. Credit: LIGO
Image Lightbox 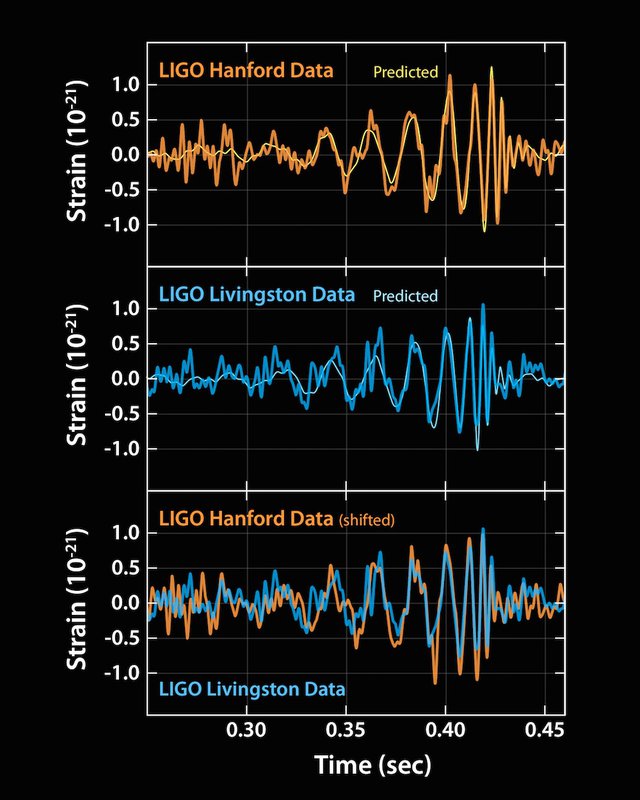 The plots show signals of gravitational waves detected by the twin LIGO observatories. The signals came from two merging black holes 1.3 billion light-years away. The top two plots show data received at each detector, along with waveforms predicted by general relativity. The X-axis plots time, the Y-axis strain—the fractional amount by which distances are distorted. The LIGO data match the predictions very closely. The final plot compares data from both facilities, confirming the detection.
Credit: LIGO
Download Full Image
Subscribe
The Caltech Weekly