Following this month's announcement of the first observation of gravitational waves arriving at the earth from a cataclysmic event in the distant universe, the Indian Cabinet, chaired by Prime Minister Shri Narendra Modi, has granted in-principle approval to the Laser Interferometer Gravitational-wave Observatory in India (LIGO-India) Project. The project will build an Advanced LIGO Observatory in India, a move that will significantly improve the ability of scientists to pinpoint the sources of gravitational waves and analyze the signals. Approval was granted on February 17, 2016.

Gravitational waves—ripples in the fabric of space and time produced by dramatic events in the universe, such as merging black holes, and predicted as a consequence of Albert Einstein's 1915 general theory of relativity—carry information about their origins and about the nature of gravity that cannot otherwise be obtained. With their first direct detection, announced on February 11, scientists opened a new window onto the cosmos.

The twin LIGO Observatories at Hanford, Washington, and Livingston, Louisiana, are funded by the U.S. National Science Foundation (NSF), and were conceived, built, and are operated by Caltech and MIT. Advanced LIGO—a major upgrade to the sensitivity of the instruments compared to the first generation LIGO detectors—began scientific operations in September 2015. Funded in large part by the NSF, Advanced LIGO enabled a large increase in the volume of the universe probed, leading to the discovery of gravitational waves during its first observation run.

At each observatory, the two-and-a-half-mile (4-km) long L-shaped interferometer uses laser light split into two beams that travel back and forth down the arms (four-foot diameter tubes kept under a near-perfect vacuum). The beams are used to monitor the distance between mirrors precisely positioned at the ends of the arms. According to Einstein's theory, the distance between the mirrors will change by an infinitesimal amount when a gravitational wave passes by the detector. A change in the lengths of the arms smaller than one-ten-thousandth the diameter of a proton (10-19 meter) can be detected.

According to David Reitze, executive director of LIGO and a Caltech research professor, the degree of precision achieved by Advanced LIGO is analogous to being able to measure the distance between our solar system and the sun's nearest neighbor Alpha Centauri—about 4.4 light-years away—accurately to within a few microns, a tiny fraction of the diameter of a human hair.

"We have built an exact copy of that instrument that can be used in the LIGO-India Observatory," says David Shoemaker, leader of the Advanced LIGO Project and director of the MIT LIGO Lab, "ensuring that the new detector can both quickly come up to speed and match the U.S. detector performance."

LIGO will provide Indian researchers with the components and training to build and run the new Advanced LIGO detector, which will then be operated by the Indian team.

According to a statement from the Indian Cabinet, "LIGO-India will also bring considerable opportunities in cutting edge technology for the Indian industry," which will be responsible for the construction of the new observatory's 4-kilometer-long beam tubes. In addition, the Cabinet statement says, "The project will motivate Indian students and young scientists to explore newer frontiers of knowledge, and will add further impetus to scientific research in the country."

The Indian effort brings together three of the country's top research institutes; the Inter-University Centre for Astronomy and Astrophysics (IUCAA), the Raja Ramanna Centre for Advanced Technology (RRCAT), and the Institute for Plasma Research (IPR). The project is managed by the Department of Atomic Energy and the Department of Science and Technology.

"It is technically feasible for LIGO-India to go online by the end of 2023," says Fred Raab, head of the LIGO Hanford Observatory and LIGO Laboratory liaison for LIGO-India. LIGO scientists have made dozens of trips to India to work with Indian colleagues, especially with the three nodal institutes that would have primary responsibility for construction and operation of LIGO India: IPR Gandhinagar, RRCAT Indore, and IUCAA Pune. "Together, we have identified an excellent site for the facilities and have transferred detailed LIGO drawings of the facilities and vacuum system to IPR, after adapting them for conditions in India," he says.

Scientists at RRCAT have designed a special testing/prototype facility for receiving Advanced LIGO parts; have been training the teams that will install and commission the detector; and are currently cross-checking the IPR vacuum-system drawings against the Advanced LIGO detector drawings, to ensure a good fit and rapid installation for the third Advanced LIGO detector. In addition to leading the site-selection process, IUCAA scientists have been setting up a computing center for current and future data. This preparation should make it possible for India to carry the project forward rapidly.

"LIGO-India will further expand the international network that started with the partnership between LIGO and Virgo, which operates a detector near Pisa, Italy," says Stanley Whitcomb, LIGO chief scientist. "With LIGO-India added to the network, we will not only detect more sources, we will dramatically increase the number of sources that can be pinpointed so that they can be studied using other types of telescopes." That ability is pivotal because combining both gravitational-wave and light-based astronomy enables a much more robust understanding of an observed object's characteristics—in much the same way that lightning is better comprehended through sight and hearing than sight alone.

"The game to see the light from these catastrophic mergers is on," says Mansi Kasliwal, assistant professor of astronomy and the leader of the Caltech effort to search for electromagnetic emission from gravitational waves using the intermediate Palomar Transient Factory, a robotic survey for astrophysical transients (brief, intense flashes of light), and a network of other telescopes. "LIGO India is out of the plane of the other three advanced gravitational-wave interferometers. Thus, it will help narrow down the on-sky location of the gravitational waves tremendously and give a big boost to the astronomers hunting for the light."

Indian astronomers have a long tradition of work in general relativity, gravitational waves, the development of algorithms for gravitational wave detection, and also in the data analysis itself, notes Ajit Kembhavi, emeritus professor at IUCAA Pune and chair of the LIGO-India site-selection committee. "The LIGO-India project provides a great opportunity to take these interests forward and to participate in the rapid development of the field, which may very well come to dominate astronomy for some time," he says.

"LIGO-India will be able to attract young people with a variety of skills from the numerous students who are engaged in strong programs in STEM education," adds Somak Raychaudhury, director of IUCAA Pune.

Fleming Crim, assistant director for mathematical and physical sciences at NSF, praised the expansion of the project, saying, "Because the science reward is so strong, NSF enthusiastically endorses the decision of the Indian government to proceed with authorizing funding for the LIGO-India project."

Gabriela González, a professor of physics at Louisiana State University and spokesperson for the LIGO Scientific Collaboration (LSC), says LIGO will "enable us to answer fundamental questions about the universe that no other type of astrophysics or astronomy can answer." The LSC consists of more than 1000 scientists from more than 90 institutions worldwide, including a large group of researchers in India

The project may also reveal answers to questions no one has yet thought to ask. Notes Reitze: "Any time you turn on some new type of telescope or microscope, you discover things you couldn't anticipate. So while there will be certain sources of gravitational waves that we expect to see, the really exciting part is what we did not predict and what we did not expect to see." 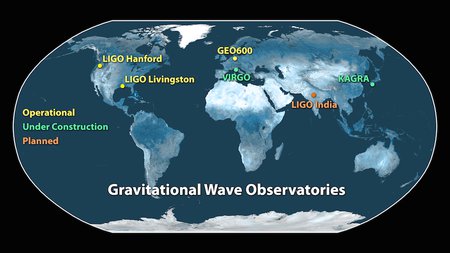 Current operating facilities in the global network include the twin LIGO detectors—in Hanford, Washington, and Livingston, Louisiana—and GEO600 in Germany. The Virgo detector in Italy and KAGRA in Japan are undergoing upgrades and are expected to begin operations in 2016 and 2018, respectively. A sixth observatory is being planned in India. Having more gravitational-wave observatories around the globe helps scientists pin down the locations and sources of gravitational waves coming from space. Credit: LIGO
Image Lightbox 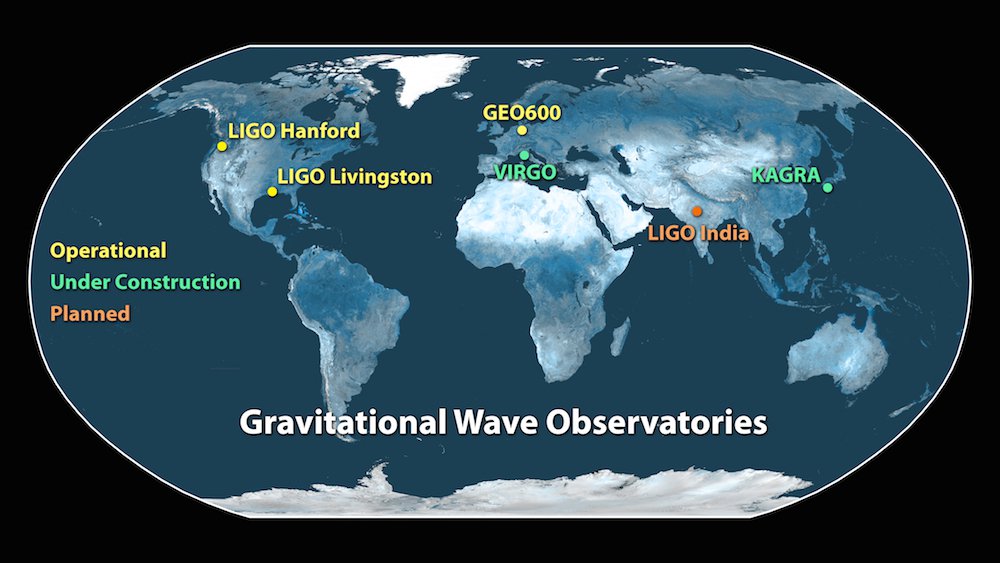 Current operating facilities in the global network include the twin LIGO detectors—in Hanford, Washington, and Livingston, Louisiana—and GEO600 in Germany. The Virgo detector in Italy and KAGRA in Japan are undergoing upgrades and are expected to begin operations in 2016 and 2018, respectively. A sixth observatory is being planned in India. Having more gravitational-wave observatories around the globe helps scientists pin down the locations and sources of gravitational waves coming from space.
Credit: LIGO
Download Full Image
Subscribe
The Caltech Weekly