First Overtones "Heard" in the Ringing of a Black Hole

By listening for specific tones in the gravitational waves of black hole mergers, researchers are putting Albert Einstein's theories to new tests.

When two black holes collide, they merge into one bigger black hole and ring like a struck bell, sending out ripples in space and time called gravitational waves. Embedded in these gravitational waves are specific frequencies, or tones, which are akin to individual notes in a musical chord.

Now, researchers have detected two such tones for the first time in the "ringdown" of a newly formed black hole. Previously, it was assumed that only a single tone could be measured and that additional tones, called overtones, would be too faint to be detected with today's technologies.

"Before, it was as if you were trying to match the sound of a chord from a guitar using only a single string," says Matthew Giesler, a graduate student at Caltech and second author of a new study detailing the results in the September 12 issue of Physical Review Letters. Giesler is lead author of a related paper submitted to Physical Review X about the technique used to find the overtones.

The results, which were based on reanalyzing data captured by the National Science Foundation's LIGO (Laser Interferometer Gravitational-wave Observatory), have put Albert Einstein's general theory of relativity to a new kind of test. Because merging black holes experience crushing gravity, studies of these events allow researchers to test the general theory of relativity under extreme conditions. In this particular case, the researchers tested a specific prediction of general relativity: that black holes can be fully described by just their mass and rate of spin. Yet again, Einstein passed the test.

"This kind of test had been proposed long before the first detection, but everybody expected it would have to wait many years before detectors would be sensitive enough," says Saul Teukolsky (PhD '73), the Robinson Professor of Theoretical Astrophysics at Caltech and advisor to Giesler. "This result shows that we can start carrying out the test already with today's detectors by including the overtones, an unexpected and exciting result."

LIGO made history in 2015 when it made the first-ever direct detection of gravitational waves, 100 years after Einstein first predicted them. Since then, LIGO and its European-based partner observatory, Virgo, have detected nearly 30 gravitational-wave events, which are being further analyzed. Many of these gravitational waves arose when two black holes collided, sending quivers through space.

"A new black hole forms out of a violent astrophysical process and thus is in an agitated state," says Maximiliano (Max) Isi (PhD '18), lead author of the Physical Review Letters study, now at MIT. "However, it quickly sheds this surplus energy in the form of gravitational waves."

As part of Giesler's graduate work, he started to investigate whether overtones could be detected in current gravitational-wave data in addition to the main signal, or tone, even though most scientists believed these overtones were too faint. He specifically looked at simulations of LIGO's first detection of gravitational waves, from a black hole merger event known as GW150914.

During the end-phase of the merger, a period of time known as the ringdown, the newly merged black hole is still shaking. Giesler found that the overtones, which are loud but short-lived, are present in an earlier phase of the ringdown than previously had been realized.

"This was a very surprising result. The conventional wisdom was that by the time the remnant black hole had settled down so that any tones could be detected, the overtones would have decayed away almost completely," says Teukolsky, who is also a professor of physics at Cornell University. "Instead, it turns out that the overtones are detectable before the main tone becomes visible."

The newfound overtones helped the researchers test the "no hair" theorem for black holes—the idea that there are no other characteristics, or "hairs," needed to define a black hole other than mass or spin. The new results confirm that the black holes do not have hairs, but scientists suspect that future tests of the theory, in which even more detailed observations are used to probe black hole mergers, may show otherwise.

"Einstein's theory could break down if there are quantum effects at play," says Giesler. "Newton's theory of gravity passes many tests where gravity is weak, but completely fails when it comes to describing gravity at its most extreme, like when it comes to trying to describe merging black holes. Similarly, as we eventually probe the signal from black holes with increasing accuracy, it is possible that even general relativity might someday fail the test."

Over the next few years, planned upgrades to LIGO and Virgo will make the observatories even more sensitive to gravitational waves, revealing additional hidden tones.

"The bigger and louder an event, the more likely LIGO can pick up these overtones," says Alan Weinstein, a professor of physics at Caltech and a member of the LIGO Laboratory, who is not associated with this study. "With LIGO's first detection of gravitational waves, we confirmed predictions made by general relativity. Now, by searching for overtones, and even fainter signals called higher-order modes, we are looking for deeper tests of the theory, and even potential evidence of the theory breaking down."

Says Isi, "Little by little, black holes will shed their mysteries, revolutionizing our understanding of gravity, space, and time."

The Physical Review Letters study, titled, "Testing the no-hair theorem with GW150914," was funded by NASA, LIGO, the National Science Foundation, the Simons Foundation, and the Sherman Fairchild Foundation. Other authors include Will Farr (BS '03) of the Flatiron Institute and Stony Brook University, and Mark Scheel, a research professor of physics at Caltech.

The study submitted to Physical Review X, titled, "Black hole ringdown: the importance of overtones," was funded by the Sherman Fairchild Foundation, NSF, LIGO, and Caltech. Other authors include Mark Scheel.

Written by
Whitney Clavin
Contact
Whitney Clavin
(626) 395‑1944
[email protected]
This simulation shows how a black hole merger would appear to our eyes if we could somehow travel in a spaceship for a closer look. It was created by solving equations from Albert Einstein's general theory of relativity using LIGO data from the event called GW150914. Credit: SXS, the Simulating eXtreme Spacetimes (SXS) project 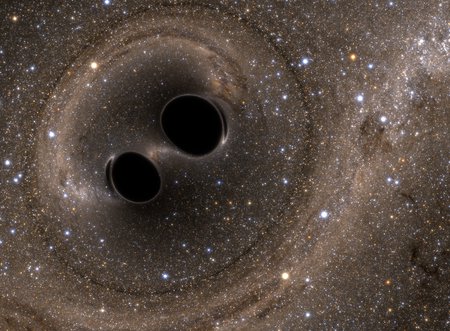 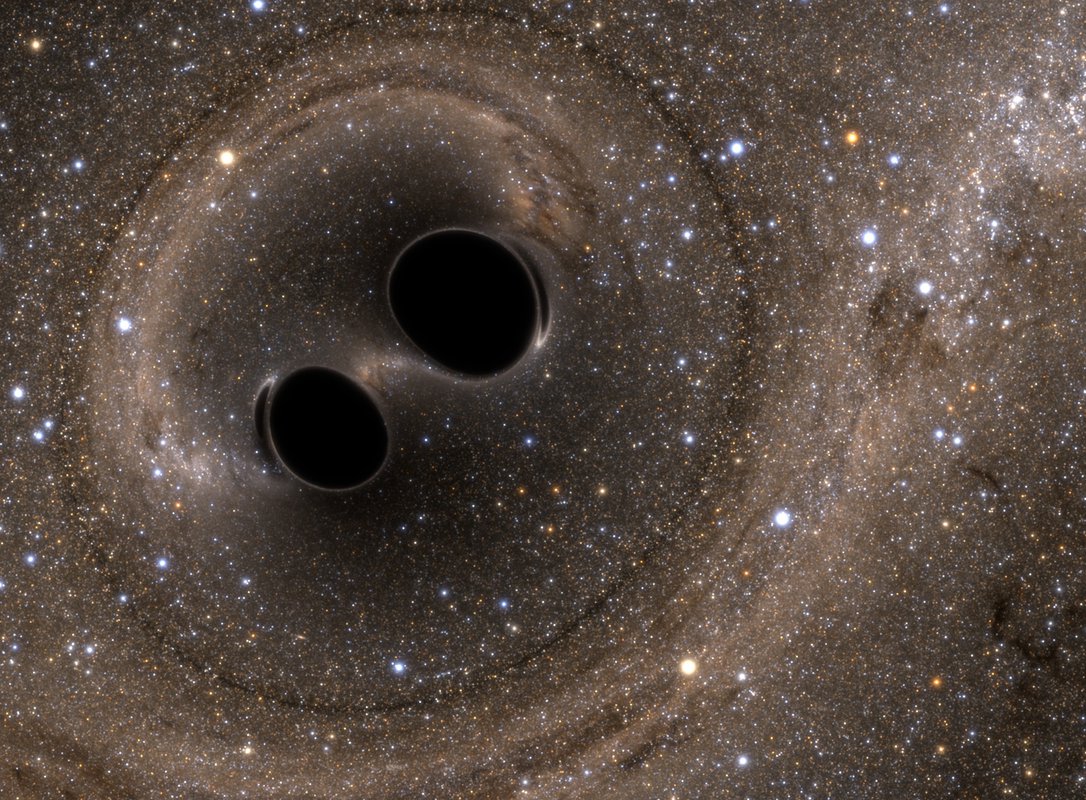