Dead Stars Found Whipping Around Each Other in Minutes

Two dead stars have been spotted whipping around each other every seven minutes. The rare celestial find was made using Caltech's Zwicky Transient Facility (ZTF), a state-of-the-art sky survey at Palomar Observatory that rapidly scans the night skies looking for anything that moves, blinks, or otherwise varies in brightness.

The newfound dynamic duo, officially known as ZTF J1539+5027, is the second fastest pair of orbiting dead stars, called white dwarfs, found to date. The pair is also the fastest "eclipsing binary system," meaning that one white dwarf repeatedly crosses in front of the other from our point of view. The eclipsing nature of the stellar companions is key because it lets astronomers learn the stars' sizes, masses, and orbital periods.

Each of the newfound white dwarfs is roughly the size of Earth, with one being a bit smaller and brighter than the other, and together they weigh as much as our sun. The two objects orbit very closely to each other, at one-fifth the distance between Earth and the moon; in fact, the orbiting stars would fit inside the planet Saturn. And they whip around each other every seven minutes at speeds of hundreds of kilometers per second.

"As the dimmer star passes in front of the brighter one, it blocks most of the light, resulting in the seven-minute blinking pattern we see in the ZTF data," says Caltech graduate student Kevin Burdge, lead author of a new study about the stars appearing in the July 25 issue of the journal Nature. "Matter is getting ready to spill off of the bigger and lighter white dwarf onto the smaller and heavier one, which will eventually completely subsume its lighter companion. We've seen many examples of a type of system where one white dwarf has been mostly cannibalized by its companion, but we rarely catch these systems as they are still merging like this one."

The pair is also unique in being one of a few known sources of gravitational waves—ripples in space and time—that will be picked up by the future European space mission LISA (Laser Interferometer Space Antenna), which is expected to launch in 2034. LISA, in which NASA plays a role, will be similar to the National Science Foundation's ground-based LIGO (Laser Interferometer Gravitational-wave Observatory), which made history in 2015 by making the first direct detection of gravitational waves from a pair of colliding black holes. But LISA will detect the waves from space at lower frequencies.

"These two white dwarfs are merging because they are emitting gravitational waves. Within a week of LISA turning on, it should pick up the gravitational waves from this system," says co-author Tom Prince, the Ira S. Bowen Professor of Physics at Caltech and a senior research scientist at JPL. "LISA will find tens of thousands of binary systems in our galaxy like this one, but so far we only know of a few. And this binary-star system is one of the best characterized yet due to its eclipsing nature."

A Rapid Blinking in the Night Sky

The rare object was spotted by ZTF, a large 576-megapixel camera residing on the Samuel Oschin Telescope at Palomar, that rapidly scans the entire sky every three nights and the bulk of the plane of the Milky Way every night. Burdge found ZTF J1539+5027 by running a computer program that tracked 10 million cosmic objects, looking for changes over a three-month span. Once he found candidate objects with ZTF, Burdge used the National Optical Astronomy Observatory's Kitt Peak National Observatory, which is funded by the National Science Foundation (NSF), to follow up and find the most promising candidates.

"This pair really stuck out because the signal repeats so often and in such a predictable way," says Burdge, who is a member of the ZTF team at Caltech. "People haven't been able to systematically search for things that change on minute-time scales before. ZTF lets us do this because its camera is huge and it can easily take pictures across the sky and then come back and repeat."

ZTF is funded by the NSF and an international collaboration of partners. Additional support comes from NASA, the Heising-Simons Foundation, members of the Space Innovation Council at Caltech, and Caltech itself. Follow-up observations made with the 200-inch Hale Telescope at Palomar Observatory and the W. M. Keck Observatory helped refine measurements of the newfound system.

"Only months after coming online, ZTF astronomers have detected white dwarfs orbiting each other at a record pace," says NSF assistant director for mathematical and physical sciences Anne Kinney. "It's a discovery that will greatly improve our understanding of these systems, and it's a taste of surprises yet to come."

The white dwarfs began their lives as stars like our sun, except they were bound together as a tight-knit pair. As the stars aged, they swelled up into red giants, though not at the same time. Over time, the swollen stars shed their outer layers, leaving behind two dead stars—the white dwarfs.

"Sometimes these binary white dwarfs merge into one star, and other times the orbit widens as the lighter white dwarf is gradually shredded by the heavier one," says co-author James (Jim) Fuller, an assistant professor of theoretical astrophysics at Caltech. "We're not sure what will happen in this case, but finding more such systems will tell us how often these stars survive their close encounters."

Another mystery the researchers hope to answer in the future involves the temperature of the hotter white dwarf, which is estimated to be 50,000 Celsius, or nine times hotter than the sun. This white dwarf is thought to be so hot because it is starting to "feed" off its companion and pull material onto it, a process that heats material to sizzling-hot temperatures. But this feeding, or "accretion" process, is usually associated with X-rays, and the researchers are not seeing any.

"It's strange that we aren't seeing X-rays in this system. One possibility is that the accretion spots on the white dwarf—the areas the material is falling on—are bigger than what is typical, and this could result in the emission of ultraviolet light and optical light instead of X-rays," says Burdge.

The team says that the white-dwarf duo, located nearly 8,000 light-years away in the Boötes constellation, should keep blinking in the night sky for a hundred thousand years to come. Amateur astronomers may be able to even see the pair as one spot on the sky, flashing every seven minutes, with the help of a telescope at least one meter in size. 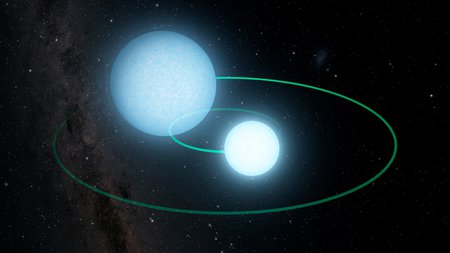 Artist's impression of a pair of orbiting white dwarfs, called ZTF J1530+5027. This "eclipsing binary" pair orbit each other roughly every seven minutes: when the larger, cooler star passes in front of, or eclipses, the smaller, hotter star, the light of the smaller star is blocked. To astronomers observing the system, the pair appears to vanish for around 30 seconds during the eclipsing phase of their orbit. Credit: Caltech/IPAC/R. Hurt 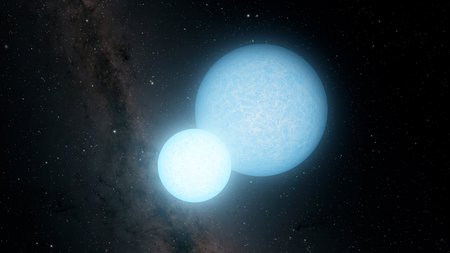 The Zwicky Transient Facility has discovered an unusual pair of white dwarfs, called ZTF J1530+5027, that whip around each other roughly every seven minutes. The combined mass of the two stars is similar to that of our sun. Credit: Caltech/IPAC/R. Hurt
Image Gallery Lightbox 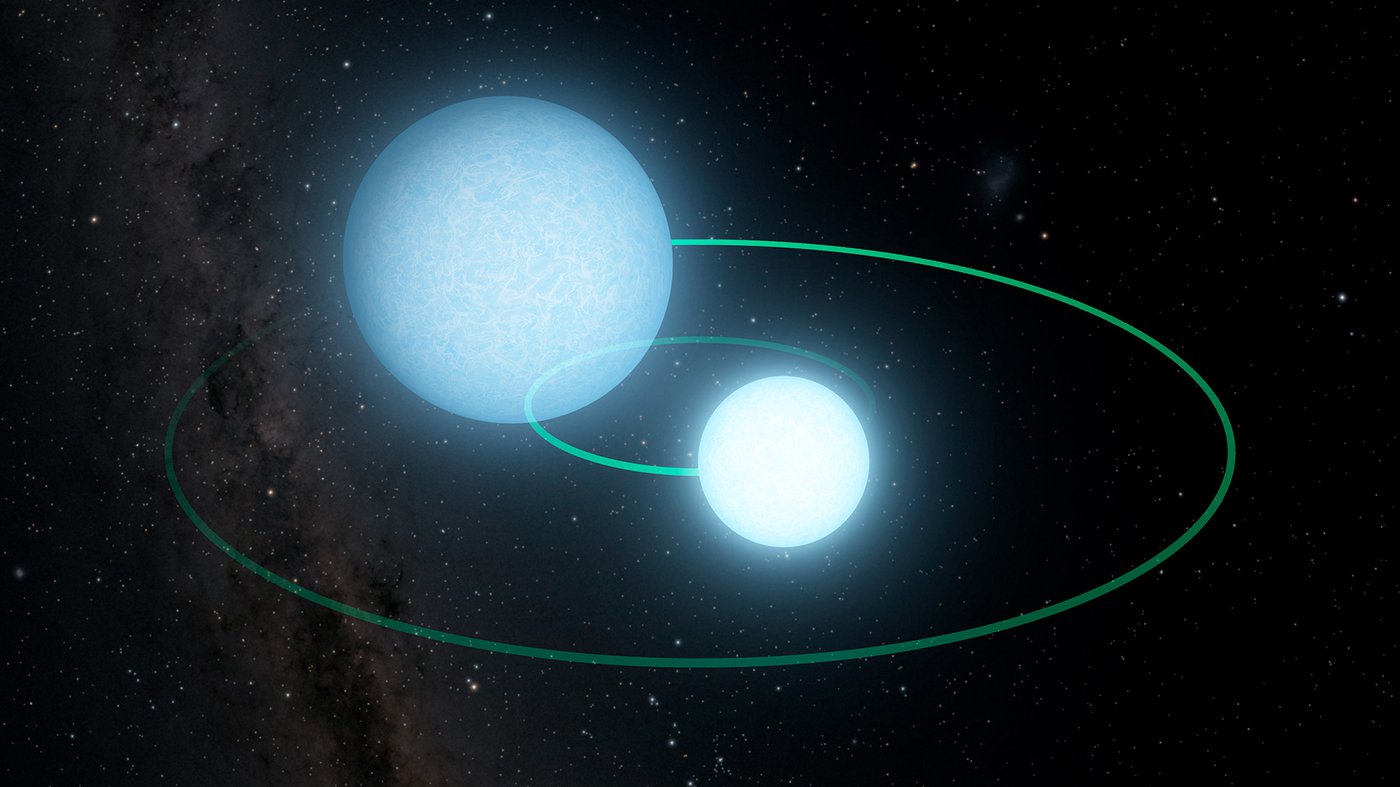 Artist's impression of a pair of orbiting white dwarfs, called ZTF J1530+5027. This "eclipsing binary" pair orbit each other roughly every seven minutes: when the larger, cooler star passes in front of, or eclipses, the smaller, hotter star, the light of the smaller star is blocked. To astronomers observing the system, the pair appears to vanish for around 30 seconds during the eclipsing phase of their orbit.
Credit: Caltech/IPAC/R. Hurt
Download Full Image 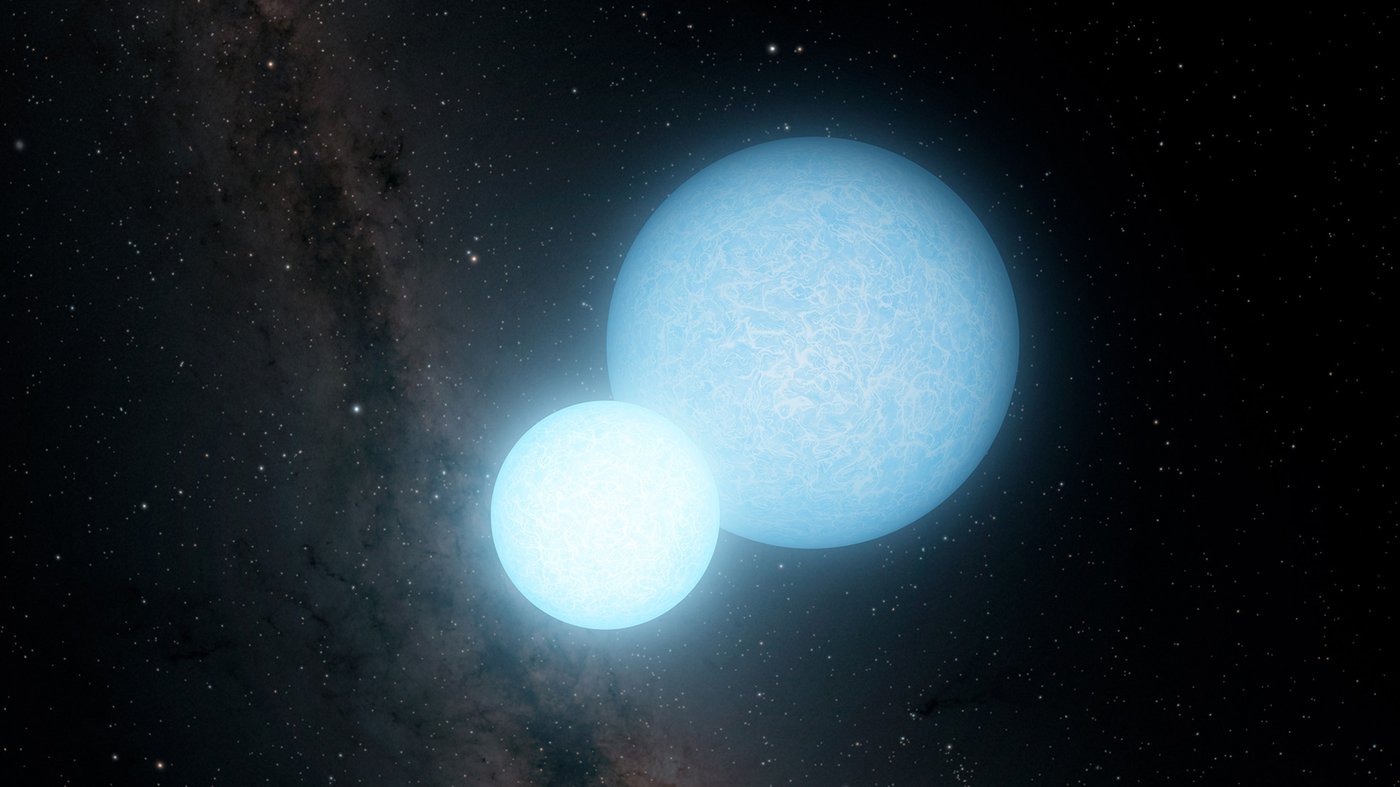 The Zwicky Transient Facility has discovered an unusual pair of white dwarfs, called ZTF J1530+5027, that whip around each other roughly every seven minutes. The combined mass of the two stars is similar to that of our sun.
Credit: Caltech/IPAC/R. Hurt
Download Full Image