Build It and They Will Come (The Fast Radio Bursts)

When Vikram Ravi, Caltech's newest assistant professor of astronomy, was young, he was sure he did not want to be an astronomer. Ravi grew up on the site of an observatory in Australia with his astronomer parents, but, as he explains, "you don't want to do what your parents do." Despite these early protests, Ravi eventually came to love astronomy—in particular building instruments and working in the field at observing facilities.

Ravi earned his bachelor's degree from the Australian National University in 2009 and his PhD in 2014 from the University of Melbourne. He served as a postdoctoral scholar at Caltech from 2015 to 2018, then served in another postdoc role at the Harvard-Smithsonian Center for Astrophysics from 2018 to 2019. He returned to Caltech this summer as a professor.

Currently, Ravi is working on various projects at the Owens Valley Radio Observatory (OVRO), near California's Sierra Nevada mountains. Recently, Ravi, working together with Gregg Hallinan, professor of astronomy and director of OVRO, and others, used a prototype array of 10 radio dishes at OVRO, as well as the W. M. Keck Observatory in Hawaii, to pinpoint a "fast radio burst" to a galaxy located 7.9 billion light years away. Fast radio bursts, or FRBs, are mysterious bursts of radio waves coming from beyond our galaxy whose causes are unknown. By pinpointing their origins with radio arrays, astronomers hope to glean what may be emitting the flashes.

Presently, Ravi, Hallinan, and their team are busy building an even larger array of radio dishes at OVRO that ultimately should nail down the locations of up to an FRB per day. We sat down with Ravi to ask about the happenings at OVRO and other aspects of his research.

When did you know you wanted to become an astronomer?

I was doing various types of research in labs during my undergrad years and started to realize I didn't like being indoors all the time. This coincided with a summer opportunity to do astronomy at the CSIRO (Commonwealth Scientific and Industrial Research Organization) Astronomy and Space Science in Sydney, Australia. I also started to appreciate that there are so many problems to solve in astronomy involving many disciplines of science and engineering—every observation presents new questions. I like the sense of adventure and exploration in astronomy that you get with the vastness of the work. And I like going to mountaintops and remote deserts. In the end, I did follow in my parents' footsteps.

Is it getting harder to observe outdoors now that remote observing is becoming more common?

It is true that remote observing from your desktop is becoming more common. Ten or 20 years ago, astronomers may have traveled to Hawaii to observe, or gone down to Caltech's Palomar near San Diego, a lot more often than they do now. But I have found I really enjoying building instruments and those efforts take me to the observing sites.

What are you working on now at OVRO?

In 2016, we received funding from the Caltech President's and Director's Fund to build a prototype array of 10 radio dishes to search for FRBs. Now, we have National Science Foundation (NSF) funding to construct a 110-dish version that will be much more sensitive. We are building the equivalent of a single 50-meter dish. Right now, we are beginning to install the dishes, which come from a small manufacturer in Wisconsin. The custom mounts, drives, and receivers are being built, and we will be laying around 50,000 feet of optic fiber in the valley. We will also be laying out the power lines and assembling a digital backend, which consists of 40 digital signal processing cards and 24 computers. The system will process 140 petabytes of data per month, which was the total U.S. internet traffic in 2003! We will begin full operations in 2021.

What questions do you hope to answer by catching these FRBs?

We still don't know a lot about FRBs and what causes them. With our new array, we can start to learn how often they happen and how often they repeat, and what sorts of galaxies they come from, which will provide important clues about their sources. We can also use these data to study the matter between us and the FRBs and answer questions about how much matter is actually bound to galaxies versus being distributed in the wispy intergalactic structure known as the cosmic web.

Are you working on any other projects?

Yes, several! One of them is called SPRITE (Stokes Polarization Radio Interferometer for Time-domain Experiments). This project will involve upgrading 10-meter radio dishes at OVRO that used to make up part of the CARMA (Combined Array for Research in Millimeter-wave Astronomy) Observatory, formerly located about an hour from OVRO. We will be giving them new receivers and digital hardware, and roboticizing their operation in order to make them more sensitive to millimeter wavelengths of light. With this increased sensitivity to millimeter wavelengths, we can systematically scan the sky and look for changes. The millimeter bands have not been historically utilized much for studying the dynamic sky, but they can offer us new views of many energetic phenomena, including the earliest stages of supernova explosions. 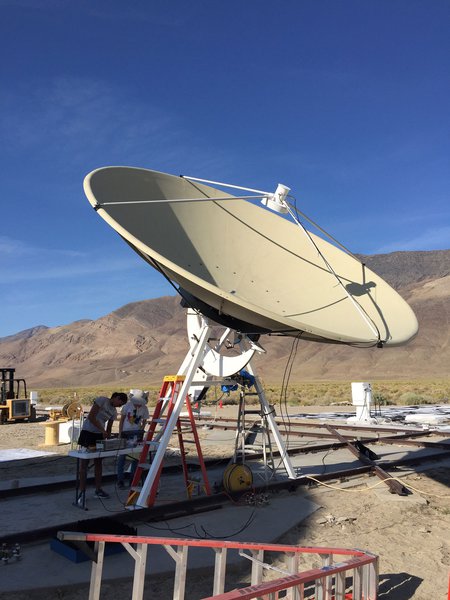 A prototype radio antenna of the Deep Synoptic Array at the Owens Valley Radio Observatory, being tested by graduate students Nitika Yadlapalli (left) and Ge (Wendy) Chen (right). By the end of 2020, 110 of these dishes will be used to search for and identify the host galaxies of fast radio bursts. Credit: Caltech/OVRO/Vikram Ravi
Image Lightbox 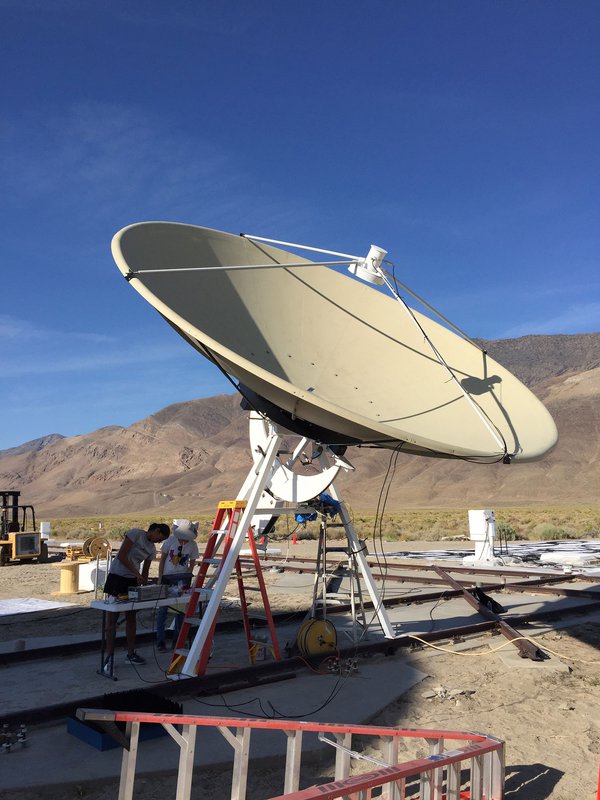 A prototype radio antenna of the Deep Synoptic Array at the Owens Valley Radio Observatory, being tested by graduate students Nitika Yadlapalli (left) and Ge (Wendy) Chen (right). By the end of 2020, 110 of these dishes will be used to search for and identify the host galaxies of fast radio bursts.
Credit: Caltech/OVRO/Vikram Ravi
Download Full Image
Subscribe
The Caltech Weekly