Fast radio bursts (FRBs) are among the most enigmatic and powerful events in the cosmos. Around 80 of these events—intensely bright millisecond-long bursts of radio waves coming from beyond our galaxy—have been witnessed so far, but their causes remain unknown.

In a rare feat, researchers at Caltech's Owens Valley Radio Observatory (OVRO) have now caught a new burst, called FRB 190523, and, together with the W. M. Keck Observatory in Hawaii, have pinpointed its origins to a galaxy 7.9 billion light-years away. Identifying the galaxies from which these radio bursts erupt is a critical step toward solving the mystery of what triggers them.

A paper about the discovery appears online July 2 in Nature.

Before this new discovery, only one other burst, called FRB 121102, had been localized to a host galaxy. FRB 121102 was reported in 2014 and then later, in 2017, was pinpointed to a galaxy lying 3 billion light-years away. Recently, a second localized FRB was announced on June 27, 2019. Called FRB 180924, this burst was discovered by a team using the Australian Square Kilometer Array Pathfinder and traced to a galaxy about 4 billion light-years away.

FRB 121102 was easiest to find because it continues to burst every few weeks. Most FRBs, however—including the Australian and OVRO finds—just go off once, making the job of finding their host galaxies harder.

"Finding the locations of the one-off FRBs is challenging because it requires a radio telescope that can both discover these extremely short events and locate them with the resolving power of a mile-wide radio dish," says Vikram Ravi, a new assistant professor of astronomy at Caltech who works with the radio telescopes at OVRO, which is situated east of the Sierra Nevada mountains in California.

"At OVRO, we built a new array of ten 4.5-meter dishes that collectively act like a mile-wide dish to cover an area on the sky the size of 150 full moons," he says. "To do this, a powerful digital system ingests and processes an amount of data equivalent to a DVD every second."

The new OVRO instrument is called the Deep Synoptic Array-10, with the "10" referring to the number of dishes. This array serves as a stepping stone for the planned Deep Synoptic Array (DSA), funded by the National Science Foundation (NSF), which, when completed by 2021, will ultimately consist of 110 radio dishes.

"The DSA is expected to discover and localize more than 100 FRBs per year," says Richard Barvainis, program director at the NSF for the Mid-Scale Innovations Program, which is funding the construction of the DSA. "Astronomers have been chasing FRBs for a decade now, and we're finally drawing a bead on them with new instruments like DSA-10 and, eventually, the full DSA. Now we have a chance of figuring out just what these exotic objects might be."

The new observations show that the host galaxy for FRB 190523 is similar to our Milky Way. This is a surprise because the previously located FRB 121102 originates from a dwarf galaxy that is forming stars more than a hundred times faster than the Milky Way.

"This finding tells us that every galaxy, even a run-of-the-mill galaxy like our Milky Way, can generate an FRB," says Ravi.

The discovery also suggests that a leading theory for what causes FRBs—the eruption of plasma from young, highly magnetic neutron stars, or magnetars—may need to be rethought.

"The theory that FRBs come from magnetars was developed in part because the earlier FRB 121102 came from an active star-forming environment, where young magnetars can be formed in the supernovae of massive stars," says Ravi. "But the host galaxy of FRB 190523 is more mellow in comparison. "

Ultimately, to solve the mystery of FRBs, astronomers hope to uncover more examples of their host galaxies.

"With the full Deep Synoptic Array, we are going to find and localize FRBs every few days," says Gregg Hallinan, the director of OVRO and a professor of astronomy at Caltech. "This is an exciting time for FRB discoveries."

The researchers also say that FRBs can be used to study the amount and distribution of matter in our universe, which will tell us more about the environments in which galaxies form and evolve. As radio waves from FRBs head toward Earth, intervening matter causes some of the wavelengths to travel faster than others; the wavelengths become dispersed in the same way that a prism spreads apart light into a rainbow. The amount of dispersion tells astronomers exactly how much matter there is between the FRB sources and Earth.

"Most matter in the universe is diffuse, hot, and outside of galaxies," says Ravi. "This state of matter, although not 'dark,' is difficult to observe directly. However, its effects are clearly imprinted on every FRB, including the one we detected at such a great distance."

The Deep Synoptic Array ten-antenna prototype (DSA-10) searches for fast radio bursts within a sky-area the size of 150 full moons (left). Within this area, the DSA-10 can locate these bursts with immense resolving power, isolating them to regions containing just one galaxy (middle). This feat was achieved for the fast radio burst called FRB 190523, detected by DSA-10 on May 23, 2019. The right panel shows the time profile of the burst above its radio spectrum. Credit: Caltech/OVRO/V. Ravi
Image Lightbox

The Deep Synoptic Array ten-antenna prototype (DSA-10) searches for fast radio bursts within a sky-area the size of 150 full moons (left). Within this area, the DSA-10 can locate these bursts with immense resolving power, isolating them to regions containing just one galaxy (middle). This feat was achieved for the fast radio burst called FRB 190523, detected by DSA-10 on May 23, 2019. The right panel shows the time profile of the burst above its radio spectrum.
Credit: Caltech/OVRO/V. Ravi
Download Full Image 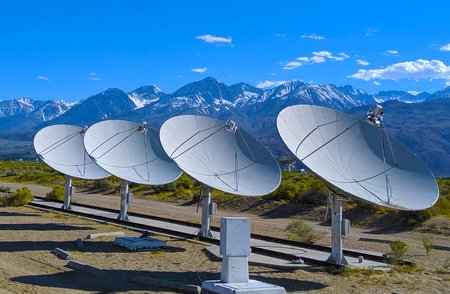 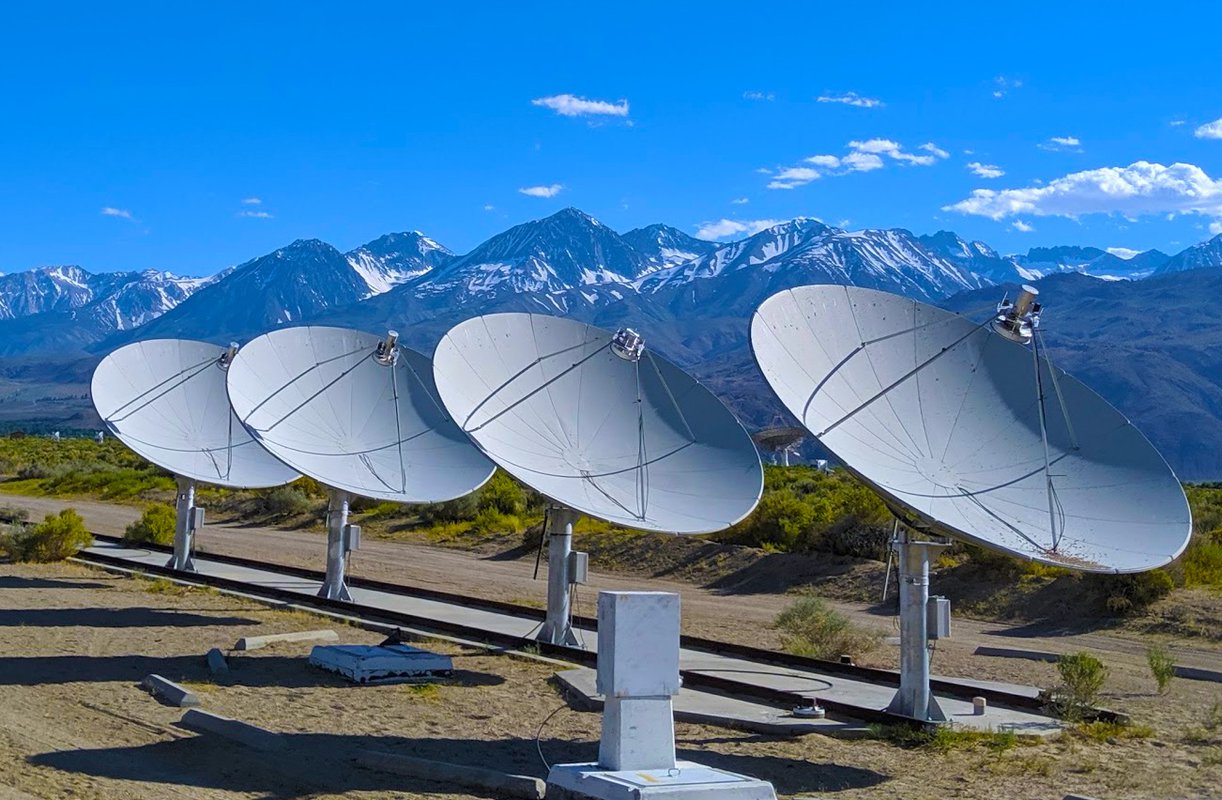