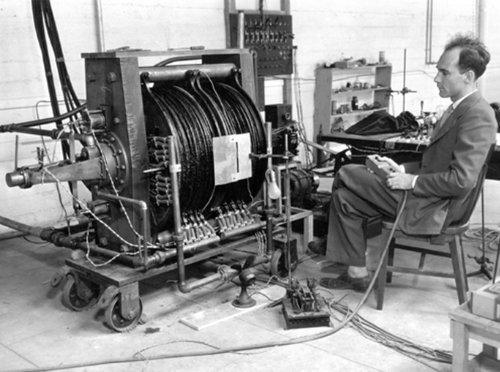 Carl Anderson with the magnet cloud chamber with which he discovered the positive electron, or positron. For this work he won the Nobel Prize in physics in 1936. Credit: Courtesy of Caltech Archives
Interactive History Map

Carl Anderson, who earned his BS in 1927 and his PhD in 1930 from Caltech, spent his entire academic and research career at the Institute. Anderson's 1932 discovery of the positron—an antimatter particle that manifests as a positively charged electron—permanently reshaped our view of the universe and earned him the Nobel Prize in Physics in 1936. Just 31 years old at the time, and still an assistant professor, Anderson was the first of Millikan's physics faculty to become a Nobel laureate. Soon after this discovery, made on the third floor of the Guggenheim Aeronautical Laboratory, Anderson and his graduate student Seth Neddermeyer identified two additional fundamental particles of matter, positive and negative mesons, or muons. To complete this work, Anderson created a strong magnetic field using the maximum power of the generator that provided electricity to the wind tunnel here in Guggenheim.