JPL's success in landing the low-cost Mars Pathfinder mission in 1997 was viewed as proof that spacecraft could be built more frequently and for far less money — a radical cultural change NASA termed "Faster, Better, Cheaper." This new way of working also called for taking greater risks and accepted that some missions might fail. As remembered by then NASA administrator Dan Goldin, "I wanted to see where the breaking point was."

The answer came with the very next missions to Mars, both managed by the Jet Propulsion Laboratory. "The Breaking Point" is the story of the loss of the Mars Climate Orbiter and Mars Polar Lander missions.

The "Faster, Better, Cheaper" era also coincided with the exciting discovery of a Mars rock that hinted at the possibility of microbial life elsewhere in the solar system. NASA's reaction was to envision a steady stream of missions to Mars — all to be done at cut-rate costs. In fact, the next challenge taken up by the Jet Propulsion Laboratory and industrial partner Lockheed Martin was to fly two missions to Mars for the price of the single Pathfinder mission.

Mars Climate Orbiter and the Mars Polar Lander both made it to the launch pad, on time and on budget, but were both lost upon arrival at Mars, resulting in one of the most difficult periods in the history of JPL. "The Breaking Point" tells the story of the demise of these two missions and the abrupt end of NASA's Faster, Better, Cheaper ethos.

"The Breaking Point" was produced, written, and directed by JPL Fellow and Emmy Award-winner Blaine Baggett.

This documentary will be screened in Caltech's Beckman Auditorium on Thursday, Jan 16, at 7 p.m. The screening will be preceded by a brief panel discussion. Doors open at 6:30 p.m. This event is free and open to the public. No registration is required. Seating is available on a first-come, first-served basis. 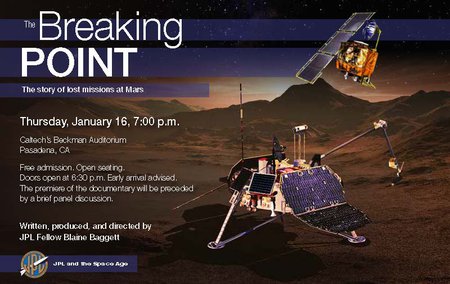 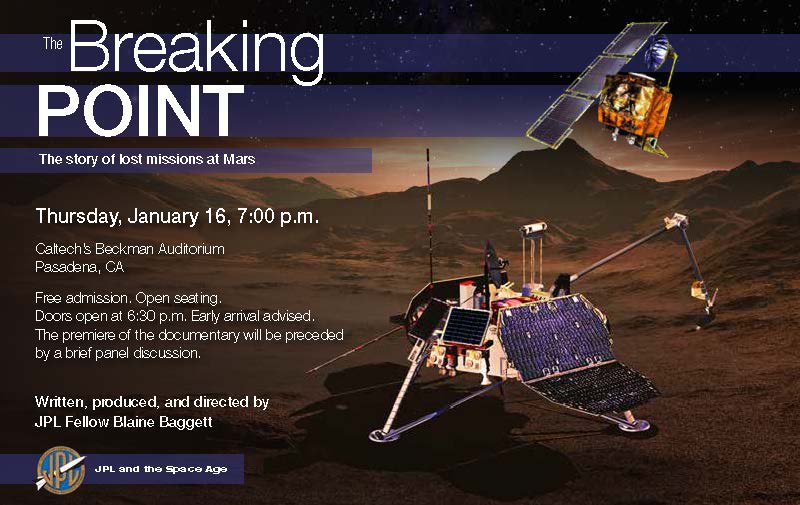