Dabney Hall, Lounge
Steve Gillette is best known as a songwriter, with songs recorded by artists from Ian & Sylvia to Garth Brooks, from Jiminy Cricket to John Denver. His song Darcy Farrow alone has been recorded by more than one hundred artists since 1966, most recently by Jimmy Dale Gilmore and Nanci Griffith. He literally wrote the book on songwriting: Songwriting and the Creative Process is a standard text in songwriting classes across the country. Steve sings in a rich baritone and is a virtuoso on guitar, using a unique fingerpicking style with a flat-pick and two fingers.

Cindy Mangsen, who married Gillette in 1989, is also a songwriter, but her focus has been on songkeeping. Cindy is a master interpreter of traditional ballads, rich in myth and legend. She plays guitar, concertina, and banjo, and is renowned for her compelling voice, described by one critic as a voice that can warm a New England winter.

Steve and Cindy have been featured on National Public Radio's All Things Considered and Mountain Stage, and have delighted audiences across North America and Europe with their music, warmth, and humor. They have produced three duet albums — Live in Concert (1991), The Light of the Day (named Best Folk Album of 1996 by WFMT and WDET), and A Sense of Place (2001) — and have recorded extensively both solo and with others. Steve comments, "Cindy has brought me back to my roots, and I think I've influenced her in terms of ensemble playing, rhythmic development, arrangement and performing. We're very fortunate to play for people who really listen and who come to a concert with a certain sense of history. There's a strong feeling of community about this music." 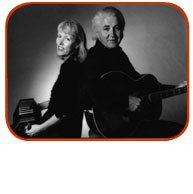