Michael Brown: Beyond Pluto: Discovery of the 10th Planet

This event was digitally recorded and is available for viewing on the Caltech Theater site.

For the past seven years astronomers have been scanning the skies for planets beyond Pluto. In 2005, after a search of about half of the sky and the discovery of dozens of objects almost the size of Pluto, Brown and his colleagues finally found 2003 UB313, the first object larger than Pluto, and the first that might be called a new planet.

In addition to a new avalanche of scientific questions, this discovery drives home the need to answer a question that astronomers have been unwilling to answer for years: "What is a planet?" Brown will discuss the story of the discovery, and attempt to give a perspective on why the question of planethood is difficult and what the real answer should be.

Michael E. Brown is Professor of Planetary Astronomy at Caltech. 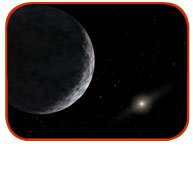 Artist Robert Hurt's concept of the view of the sun from the planet.
Image Lightbox