PLEASE NOTE: There are currently no tickets available for this performance. We often receive returns or cancellations, generally the week of an event. Please call the Ticket Office to check for current availability.

Throughout his long career, Holbrook has continued to perform Mark Twain every year, including a world tour in 1985, the 150th anniversary of Mark Twain's birth, beginning in London and ending in New Delhi. He has toured the show in some part of every year since 1954, making last year the 50th consecutive year for this remarkable one-man show. Mark Twain Tonight! has become perhaps the longest running show in theater history. Holbrook adds to his Twain material nearly every year, editing and changing it to fit the times. He marked his 2000th performance on January 17th, 2004, and has mined over fifteen hours of Twain with more coming all the time. He has no set program he chooses the program as he goes along.

This is a Family Nights Out event. 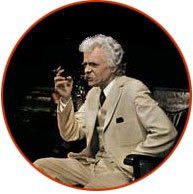