Film Screening - The Pathfinders: The Story of the First Mars Rover Mission

It started with JPL agreeing to land something on Mars cheaply, and to do it in a radically different way. This is how the era that NASA called "Faster, Better, Cheaper" began. The documentary film "The Pathfinders" tells the story of a small group of JPLers who did not heed warnings that the audacious challenge of landing on Mars with airbags would likely not be a career-enhancing move.

With a parachute that could not be tested in a way to match the Martian atmosphere, to the late addition of an unwanted rover that would not have looked out of place in a toy store, the Mars Pathfinder mission was a doubter's dream, taken on by a mostly young group of engineers and scientists guided by a grizzled manager known for being a maverick. "The Pathfinders" retraces the journey of this daring mission to Mars that captured the hearts and minds of people around of the world with its dramatic landing and its tiny rover, the first wheels ever to roll on Mars, becoming a cultural icon, as well as a record-breaking phenomenon on the brand new World Wide Web.

"The Pathfinders" was produced, written and directed by JPL Fellow and Emmy Award-winner Blaine Baggett. This is the first of four documentary screenings about JPL missions to the Red Planet preceding the much anticipated launch of Mars 2020, the next rover to Mars next summer.

This event is free and open to the public. Online registration is requested. Seating is available on a first-come, first-served basis. Doors open at 6:30 p.m. Early arrival is advised. 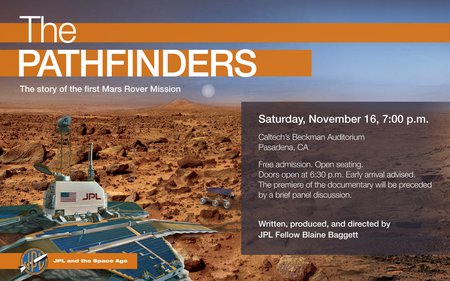