Young Star Caught in a Fit of Growth

Researchers have discovered a young star in the midst of a rare growth spurt—a dramatic phase of stellar evolution when matter swirling around a star falls onto the star, bulking up its mass. The star belongs to a class of fitful stars known as FU Ori's, named after the original member of the group, FU Orionis (the capital letters represent a naming scheme for variable stars, and Orionis refers to its location in the Orion constellation). Typically, these stars, which are less than a few million years old, are hidden behind thick clouds of dust and hard to observe. This new object is only the 25th member of this class found to date and one of only about a dozen caught in the act of an outburst.

"These FU Ori events are extremely important in our current understanding of the process of star formation but have remained almost mythical because they have been so difficult to observe," says Lynne Hillenbrand, professor of astronomy at Caltech and lead author of a new report on the findings appearing in The Astrophysical Journal. "This is actually the first time we've ever seen one of these events as it happens in both optical and infrared light, and these data have let us map the movement of material through the disk and onto the star."

The newfound star, called Gaia 17bpi, was first spotted by the European Space Agency's Gaia satellite, which scans the sky continuously, making precise measurements of stars in visible light. When Gaia spots a change in a star's brightness, an alert goes out to the astronomy community. A graduate student at the University of Exeter and co-author of the new study, Sam Morrell, was the first to notice that the star had brightened. Other members of the team then followed up and discovered that the star's brightening had been serendipitously captured in infrared light by NASA's asteroid-hunting NEOWISE satellite at the same time that Gaia saw it, as well as one-and-a-half-years earlier.

"While NEOWISE's primary mission is detecting nearby solar system objects, it also images all of the background stars and galaxies as it sweeps around the sky every six months," says co-author Roc Cutri, lead scientist for the NEOWISE Data Center at IPAC, an astronomy and data center at Caltech. "NEOWISE has been surveying in this way for five years now, so it is very effective for detecting changes in the brightness of objects."

NASA's infrared-sensing Spitzer Space Telescope also happened to have witnessed the beginning of the star's brightening phase twice back in 2014, giving the researchers a bonanza of infrared data.

The new findings shine light on some of the longstanding mysteries surrounding the evolution of young stars. One unanswered question is: How does a star acquire all of its mass? Stars form from collapsing balls of gas and dust. With time, a disk of material forms around the star, and the star continues to siphon material from this disk. But, according to previous observations, stars do not pull material onto themselves fast enough to reach their final masses.

Theorists believe that FU Ori events—in which mass is dumped from the disk onto the star over a total period of about 100 years—may help solve the riddle. The scientists think that all stars undergo around 10 to 20 or so of these FU Ori events in their lifetimes but, because this stellar phase is often hidden behind dust, the data are limited. "Somebody sketched this scenario on the back of an envelope in the 1980s, and, after all this time, we still haven't done much better at determining the event rates," says Hillenbrand.

The new study shows, with the most detail yet, how material moves from the midrange of a disk, in a region located around 1 astronomical unit from the star, to the star itself. (An astronomical unit is the distance between Earth and the sun.) NEOWISE and Spitzer were the first to pick up signs of the buildup of material in the middle of the disk. As the material started to accumulate in the disk, it warmed up, giving off infrared light. Then, as this material fell onto the star, it heated up even more, giving off visible light, which is what Gaia detected.

"The material in the middle of the disk builds up in density and becomes unstable," says Hillenbrand. "Then it drains onto the star, manifesting as an outburst."

The researchers used the W. M. Keck Observatory and Caltech's Palomar Observatory to help confirm the FU Ori nature of the newfound star. Says Hillenbrand, "You can think of Gaia as discovering the initial crime scene, while Keck and Palomar pointed us to the smoking gun." 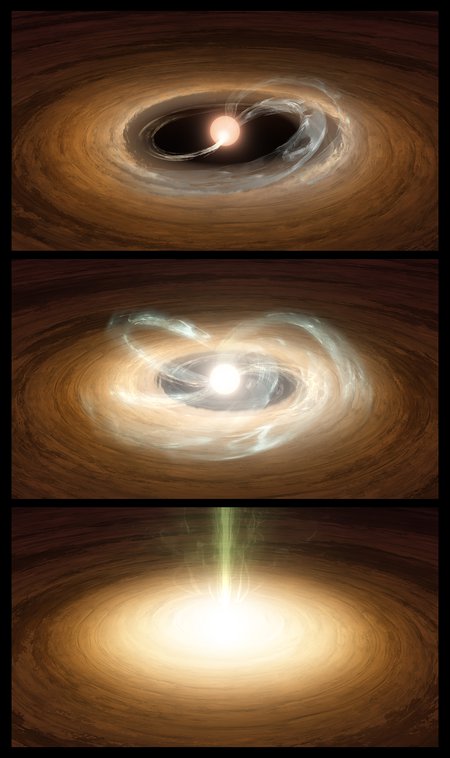 This illustration shows a young star undergoing a growth spurt. Top panel: Material from the dusty and gas-rich disk (orange) plus hot gas (blue) mildly flows onto the star, creating a hot spot. Middle panel: The outburst begins—the inner disk is heated, more material flows to the star, and the disk creeps inward. Lower panel: The outburst is in full throttle, with the inner disk merging into the star and gas flowing outward (green). [FULL-SIZE IMAGE] Credit: Caltech/T. Pyle (IPAC) 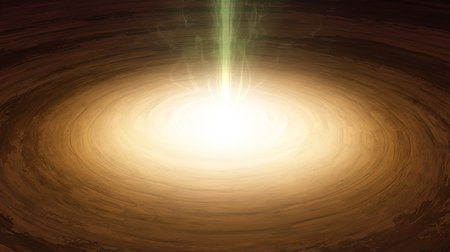 An illustration of a young star undergoing an outburst, in which material from a surrounding disk has drained onto the star itself, bulking up its mass. Gas is seen flowing outward in green. [FULL-SIZE IMAGE] Credit: Caltech/T. Pyle (IPAC) 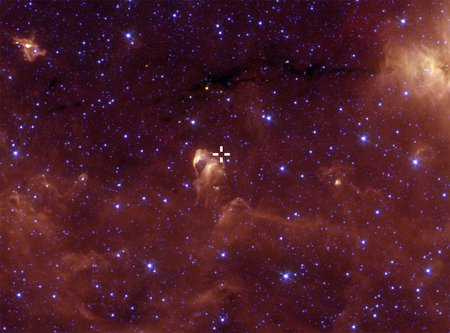 The location of Gaia 17bpi, which lies in the Sagitta constellation, is indicated in the center of this image taken by NASA's Spitzer Space Telescope. [FULL-SIZE IMAGE] Credit: NASA/JPL-Caltech/M. Kuhn (Caltech)
Image Gallery Lightbox 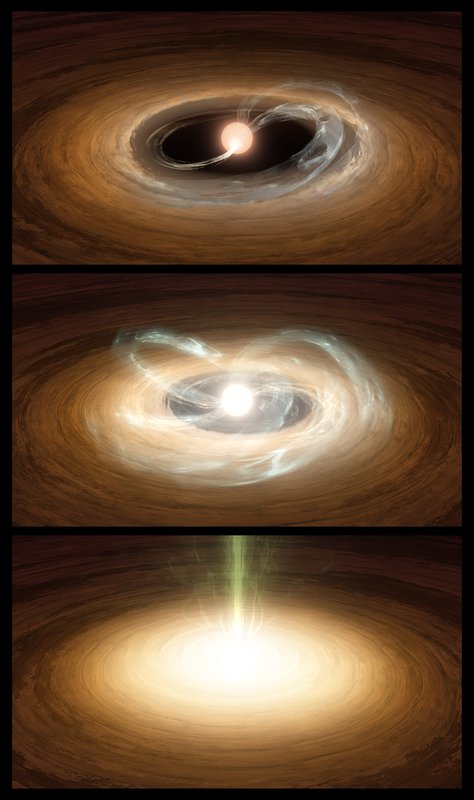 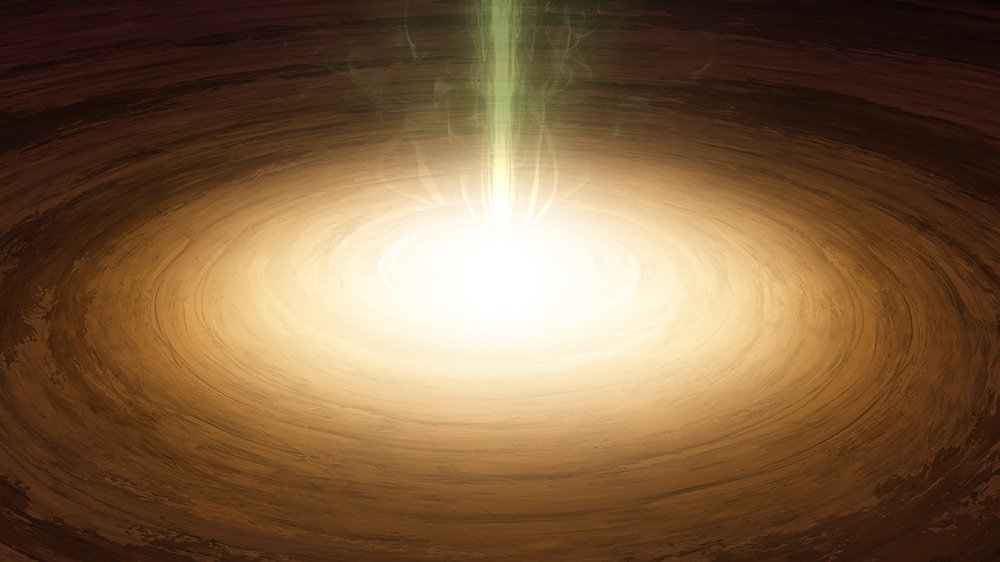 An illustration of a young star undergoing an outburst, in which material from a surrounding disk has drained onto the star itself, bulking up its mass. Gas is seen flowing outward in green. [FULL-SIZE IMAGE]
Credit: Caltech/T. Pyle (IPAC)
Download Full Image 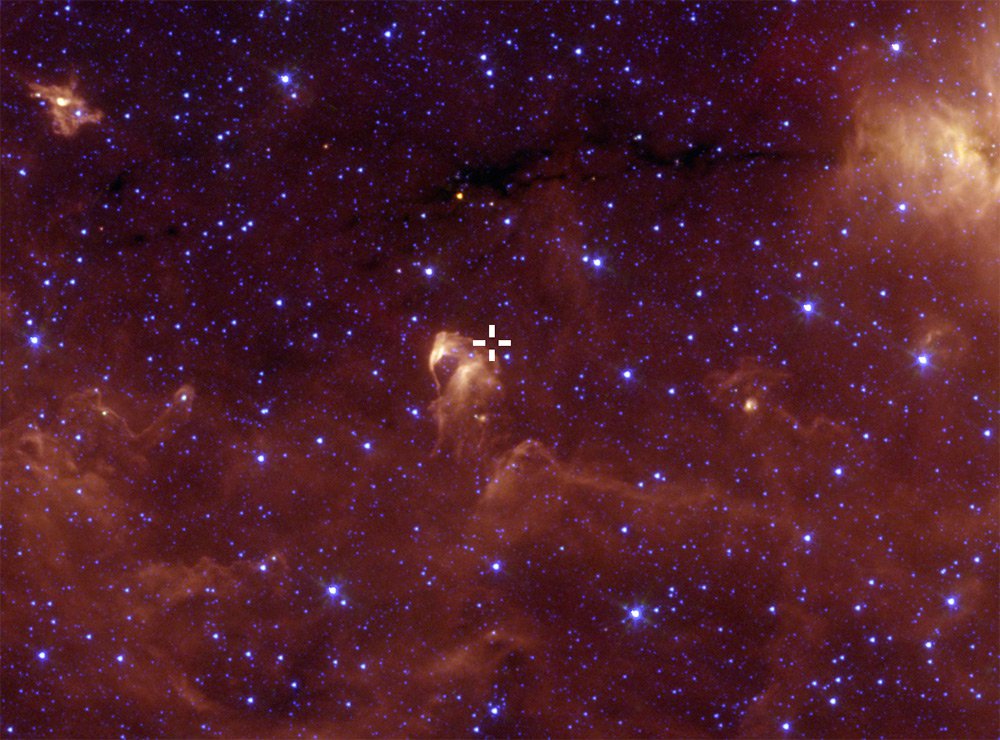 The location of Gaia 17bpi, which lies in the Sagitta constellation, is indicated in the center of this image taken by NASA's Spitzer Space Telescope. [FULL-SIZE IMAGE]
Credit: NASA/JPL-Caltech/M. Kuhn (Caltech)
Download Full Image