In 2006, Caltech's Paul Rothemund (BS '94)—now research professor of bioengineering, computing and mathematical sciences, and computation and neural systems—developed a method to fold a long strand of DNA into a prescribed shape. The technique, dubbed DNA origami, enabled scientists to create self-assembling DNA structures that could carry any specified pattern, such as a 100-nanometer-wide smiley face.

DNA origami revolutionized the field of nanotechnology, opening up possibilities of building tiny molecular devices or "smart" programmable materials. However, some of these applications require much larger DNA origami structures.

Now, scientists in the laboratory of Lulu Qian, assistant professor of bioengineering at Caltech, have developed an inexpensive method by which DNA origami self-assembles into large arrays with entirely customizable patterns, creating a sort of canvas that can display any image. To demonstrate this, the team created the world's smallest recreation of Leonardo da Vinci's Mona Lisa—out of DNA.

The work is described in a paper appearing in the December 7 issue of the journal Nature.

To make a single square of DNA origami, one just needs a long single strand of DNA and many shorter single strands—called staples—designed to bind to multiple designated places on the long strand. When the short staples and the long strand are combined in a test tube, the staples pull regions of the long strand together, causing it to fold over itself into the desired shape. A large DNA canvas is assembled out of many smaller square origami tiles, like putting together a puzzle. Molecules can be selectively attached to the staples in order to create a raised pattern that can be seen using atomic force microscopy.

The Caltech team developed software that can take an image such as the Mona Lisa, divide it up into small square sections, and determine the DNA sequences needed to make up those squares. Next, their challenge was to get those sections to self-assemble into a superstructure that recreates the Mona Lisa.

"We could make each tile with unique edge staples so that they could only bind to certain other tiles and self-assemble into a unique position in the superstructure," explains Grigory Tikhomirov, senior postdoctoral scholar and the paper's lead author, "but then we would have to have hundreds of unique edges, which would be not only very difficult to design but also extremely expensive to synthesize. We wanted to only use a small number of different edge staples but still get all the tiles in the right places."

The key to doing this was to assemble the tiles in stages, like assembling small regions of a puzzle and then assembling those to make larger regions before finally putting the larger regions together to make the completed puzzle. Each mini puzzle utilizes the same four edges, but because these puzzles are assembled separately, there is no risk, for example, of a corner tile attaching in the wrong corner. The team has called the method "fractal assembly" because the same set of assembly rules is applied at different scales.

"Once we have synthesized each individual tile, we place each one into its own test tube for a total of 64 tubes," says Philip Petersen, a graduate student and co-first author on the paper. "We know exactly which tiles are in which tubes, so we know how to combine them to assemble the final product. First, we combine the contents of four particular tubes together until we get 16 two-by-two squares. Then those are combined in a certain way to get four tubes each with a four-by-four square. And then the final four tubes are combined to create one large, eight-by-eight square composed of 64 tiles. We design the edges of each tile so that we know exactly how they will combine."

The Qian team's final structure was 64 times larger than the original DNA origami structure designed by Rothemund in 2006. Remarkably, thanks to the recycling of the same edge interactions, the number of different DNA strands required for the assembly of this DNA superstructure was about the same as for Rothemund's original origami. This should make the new method similarly affordable, according to Qian.

"The hierarchical nature of our approach allows using only a small and constant set of unique building blocks, in this case DNA strands with unique sequences, to build structures with increasing sizes and, in principle, an unlimited number of different paintings," says Tikhomirov. "This economical approach of building more with less is similar to how our bodies are built. All our cells have the same genome and are built using the same set of building blocks, such as amino acids, carbohydrates, and lipids. However, via varying gene expression, each cell uses the same building blocks to build different machinery, for example, muscle cells and cells in the retina."

"To make our technique readily accessible to other researchers who are interested in exploring applications using micrometer-scale flat DNA nanostructures, we developed an online software tool that converts the user's desired image to DNA strands and wet-lab protocols," says Qian. "The protocol can be directly read by a liquid-handling robot to automatically mix the DNA strands together. The DNA nanostructure can be assembled effortlessly."

"Other researchers have previously worked on attaching diverse molecules such as polymers, proteins, and nanoparticles to much smaller DNA canvases for the purpose of building electronic circuits with tiny features, fabricating advanced materials, or studying the interactions between chemicals or biomolecules," says Petersen. "Our work gives them an even larger canvas to draw upon."

The paper is titled "Fractal assembly of micrometre-scale DNA origami arrays with arbitrary patterns." The work was funded by the Burroughs Wellcome Fund, the National Institutes of Health's National Research Service Award, and the National Science Foundation's Expeditions in Computing program.

View the researchers' video that explains the work. 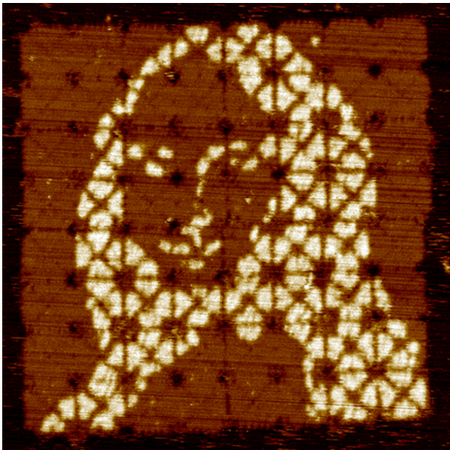 The world's smallest Mona Lisa, made out of DNA. Credit: Qian laboratory 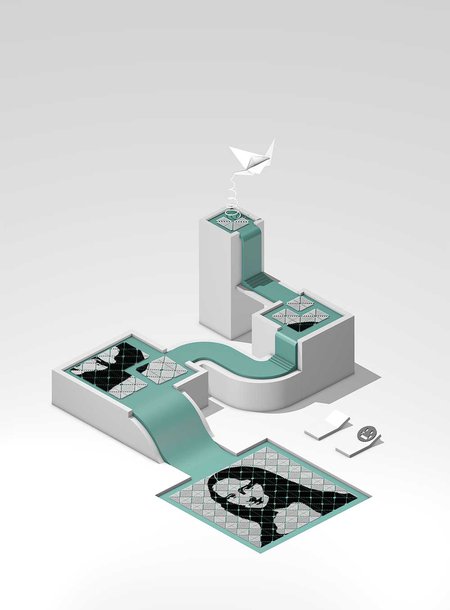 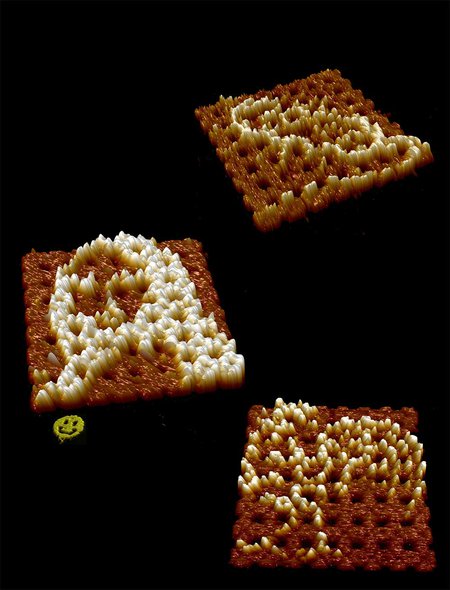 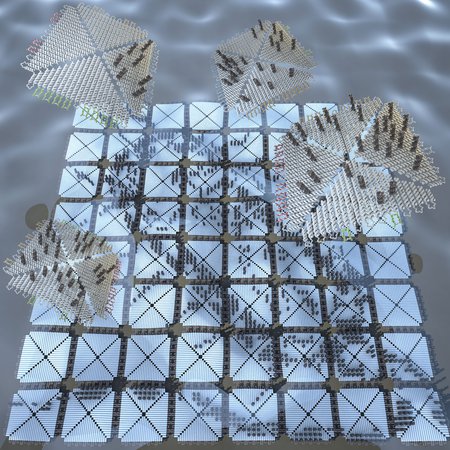 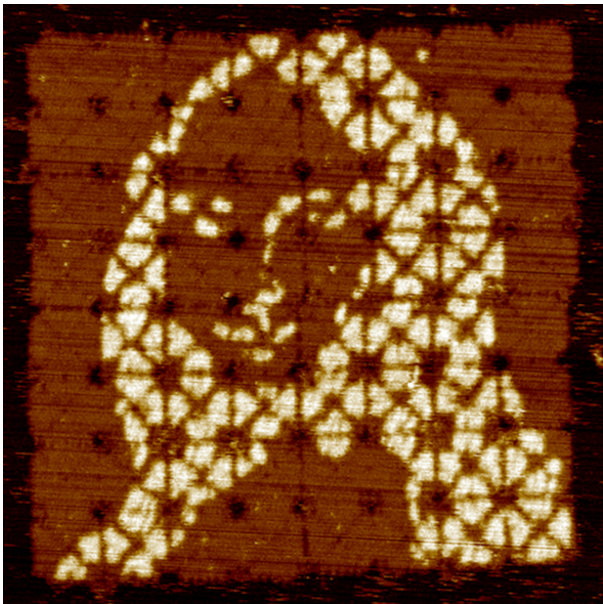 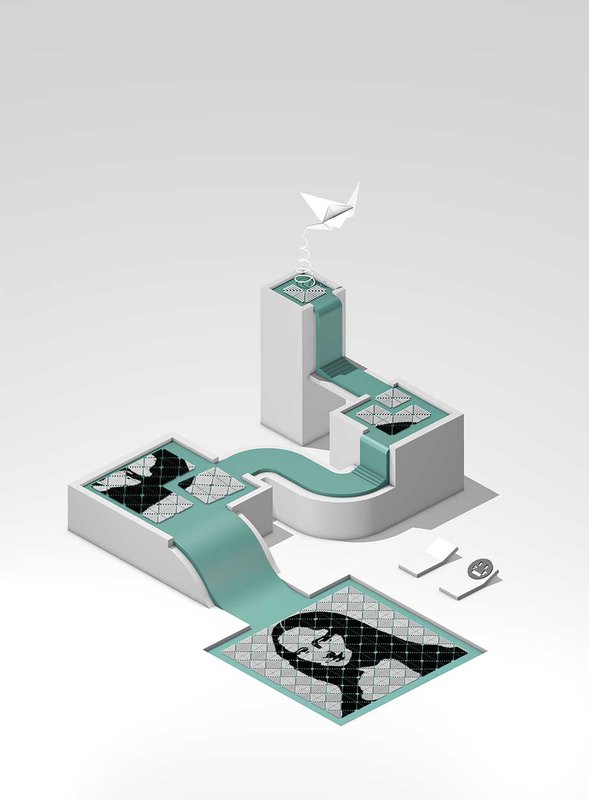 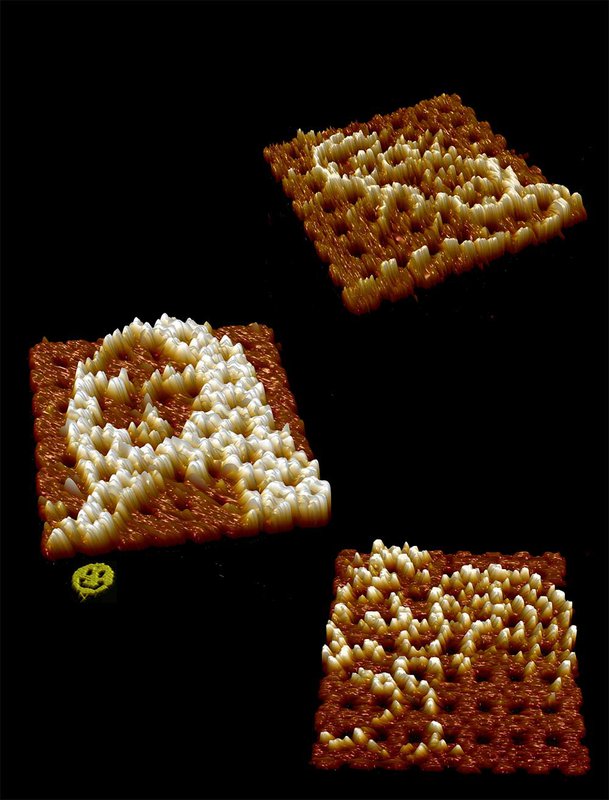 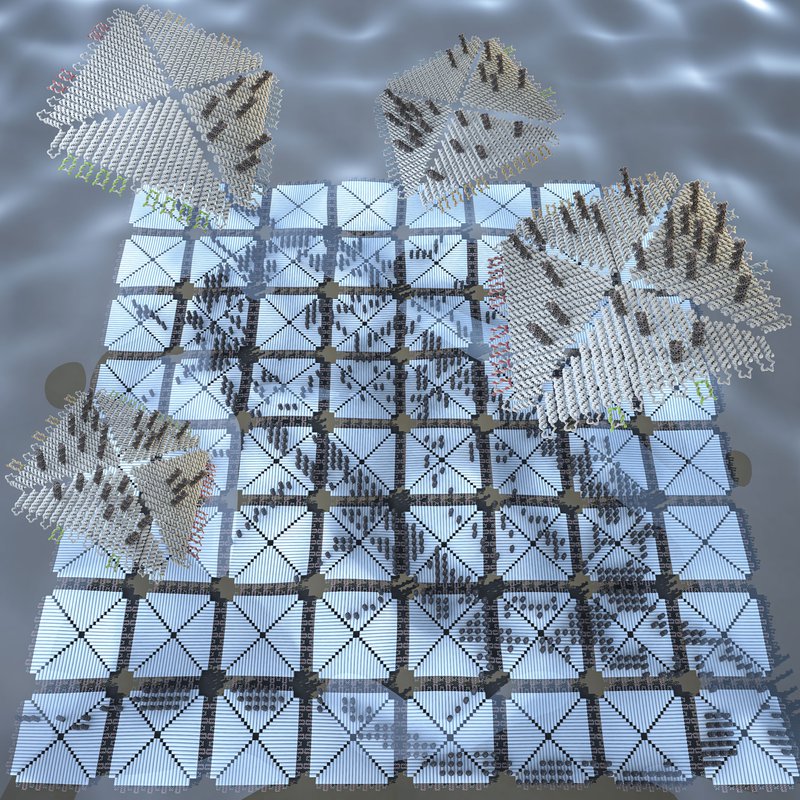