An estimated 4.5 billion people in the developing world lack access to adequate sanitation facilities—a situation that contributes to millions of deaths every year as well as environmental pollution and economic losses. But even the best sanitation systems installed in the developing world can easily be rendered useless if they break down and no one in the area knows how to fix them.

That is the problem now being addressed by the inventors of the solar-powered toilet, a unit developed by a team led by Caltech's Michael Hoffmann that won the Bill and Melinda Gates Foundation's Reinvented Toilet Challenge in 2012. The toilet integrates an electrochemical reactor to treat wastewater, providing a safe and inexpensive way to dispose of human waste. Since developing the solar toilet system, the engineers have worked to improve its design and are field-testing several prototypes at university and public park settings in India and China (with plans to begin testing four additional units in schools in South Africa).

"But it has become increasingly clear that solutions like ours to the sanitation problem are only going to work if there is an easy plan in place for maintenance," says Cody Finke, a graduate student in Hoffmann's lab. Currently, when even a minor part of one of the test toilets breaks—as tends to happen every six months or so—someone from Hoffmann's group has to fly to the site to fix the problem.

"We wanted to empower local communities in the developing world to be able to repair their own sanitation technologies—to find some way to turn essentially anyone into a maintenance engineer," says Finke.

Now with a project they call Seva, which means "service" in Hindi, Hoffmann, Finke and their colleagues believe they have found a solution to the maintenance problem. On June 11, the Caltech team was named the first place winner of Vodafone's Wireless Innovation Project, a program designed to promote mobile and wireless technology solutions to address critical global issues. The award comes with $300,000 of funding over three years.

The Seva team realized that because the solar toilet and other sanitation systems like it are relatively simple, inexpensive sensors could be used to monitor the status of those systems' parts. Combining that insight with the knowledge that more than three-quarters of the world's people have access to a mobile phone, the team decided to design a self-diagnosing maintenance system for sanitation solutions that could alert designated local operators of a malfunction via cell phone message.

With the Vodafone prize money, the Seva team will develop and test its maintenance system over the next three years. Here is how it will work: sensors embedded in the system will be able to determine if it has failed, and how. It will then automatically send a text or audio cell phone message to an operator, letting them know that they should come and repair the toilet. A video display on the treatment system will then provide the operator with step-by-step pictorial instructions, showing them how to replace the broken part.

"The cool thing about our technology is we've designed it so everything can be repaired with just a single screwdriver," says Finke. "The parts can simply be replaced."

The engineers have already determined which sensors are needed to identify the different ways the toilet system can fail. Finke is writing the algorithms to automate the self-diagnosing system and to interface the sensors with a mobile phone. Anastasia Hanan, a recent graduate of Art Center School of Design, will design the user interface. Finke and fellow Caltech graduate student Clement Cid will field-test the technology along with Harsh Kumar of Eram Scientific. They expect to start that testing sometime next winter, beginning on campus with a solar toilet housed in a shipping container in the parking lot behind the Joint Center for Artificial Photosynthesis.

"Anyone on campus can use that toilet, and several people do," Finke says.

In about a year and a half, the engineers plan to begin field-testing their maintenance solution at the solar toilets in China, India, and South Africa. Eventually, the sanitation units could be manufactured with the sensors and maintenance system already in place.

"We feel that our new self-diagnosing technology will enable what has been kind of a Band-Aid fix to become an actual sustainable fix to the sanitation problem," says Finke. 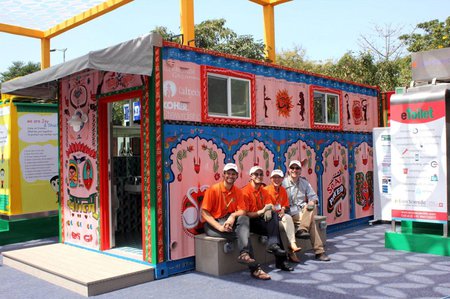 Caltech's treatment system on display at the Reinvent the Toilet Fair in Delhi, India. Pictured (left to right) are Cody Finke, Clement Cid, Yan Qu, and George Friedman. Finke and Cid are members of the Seva project that has won first prize in Vodafone's Wireless Innovation Project competition.
Image Lightbox 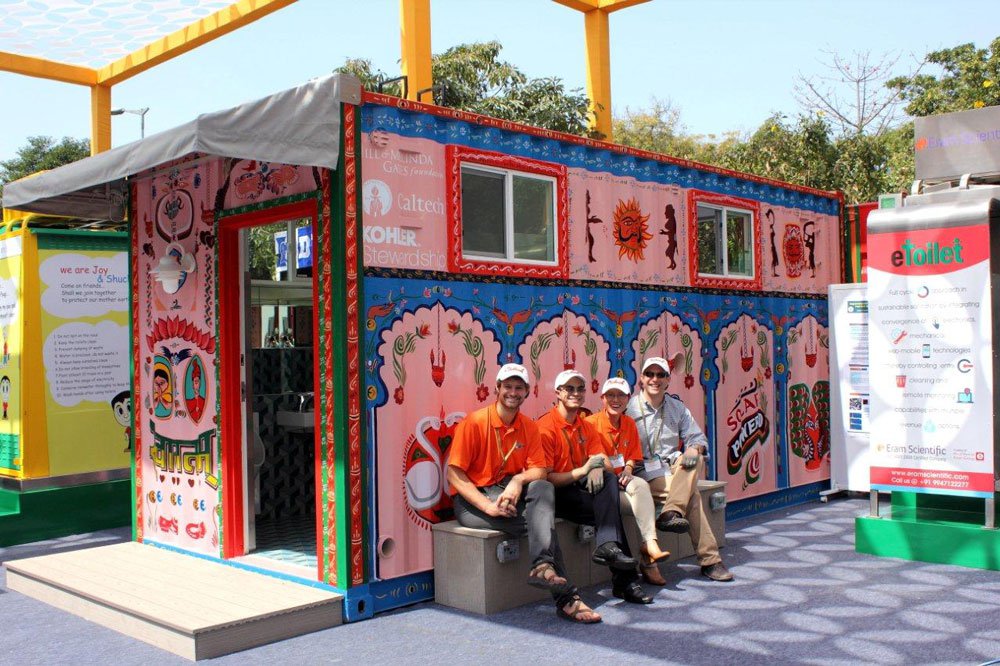