A Window Into Europa's Ocean Lies Right at the Surface

PASADENA, Calif.—If you could lick the surface of Jupiter's icy moon Europa, you would actually be sampling a bit of the ocean beneath. So says Mike Brown, an astronomer at the California Institute of Technology (Caltech). Brown—known as the Pluto killer for discovering a Kuiper-belt object that led to the demotion of Pluto from planetary status—and Kevin Hand from the Jet Propulsion Laboratory (JPL) have found the strongest evidence yet that salty water from the vast liquid ocean beneath Europa's frozen exterior actually makes its way to the surface.

The finding, based on some of the first data of its kind since NASA's Galileo mission (1989–2003) to study Jupiter and its moons, suggests that there is a chemical exchange between the ocean and surface, making the ocean a richer chemical environment, and implies that learning more about the ocean could be as simple as analyzing the moon's surface. The work is described in a paper that has been accepted for publication in the Astronomical Journal.

"We now have evidence that Europa's ocean is not isolated—that the ocean and the surface talk to each other and exchange chemicals," says Brown, the Richard and Barbara Rosenberg Professor and professor of planetary astronomy at Caltech. "That means that energy might be going into the ocean, which is important in terms of the possibilities for life there. It also means that if you'd like to know what's in the ocean, you can just go to the surface and scrape some off."

"The surface ice is providing us a window into that potentially habitable ocean below," says Hand, deputy chief scientist for solar system exploration at JPL.

Since the days of the Galileo mission, when the spacecraft showed that Europa was covered with an icy shell, scientists have debated the composition of Europa's surface. The infrared spectrometer aboard Galileo was not capable of providing the detail needed to definitively identify some of the materials present on the surface. Now, using current technology on ground-based telescopes, Brown and Hand have identified a spectroscopic feature on Europa's surface that indicates the presence of a magnesium sulfate salt, a mineral called epsomite, that could only originate from the ocean below.

Europa's ocean is thought to be 100 kilometers deep and covers the entire globe. The moon remains locked in relation to Jupiter, with the same hemisphere always leading and the other trailing in its orbit. The leading hemisphere has a yellowish appearance, while the trailing hemisphere seems to be splattered and streaked with a red material.

The spectroscopic data from that red side has been a cause of scientific debate for 15 years. It is thought that one of Jupiter's largest moons, Io, spews volcanic sulfur from its atmosphere, and Jupiter's strong magnetic field sends some of that sulfur hurtling toward the trailing hemisphere of Europa, where it sticks. It is also clear from Galileo's data that there is something other than pure water ice on the trailing hemisphere's surface. The debate has focused on what that other something is—i.e., what has caused the spectroscopic data to deviate from the signature of pure water ice.

"From Galileo's spectra, people knew something was there besides water. They argued for years over what it might be—sodium sulfate, hydrogen sulfate, sodium hydrogen carbonate, all these things that look more or less similar in this range of the spectrum," says Brown. "But the really difficult thing was that the spectrometer on the Galileo spacecraft was just too coarse."

Brown and Hand decided that the latest spectrometers on ground-based telescopes could improve the data pertaining to Europa, even from a distance of about 400 million miles. Using the Keck II telescope on Mauna Kea—which is outfitted with adaptive optics to adjust for the blurring effect of Earth's atmosphere—and its OH-Suppressing Infrared Integral Field Spectrograph (OSIRIS), they first mapped the distribution of pure water ice versus anything else on the moon. The spectra showed that even Europa's leading hemisphere contains significant amounts of nonwater ice. Then, at low latitudes on the trailing hemisphere—the area with the greatest concentration of the nonwater ice material—they found a tiny dip in the spectrum that had never been detected before.

"We now have the best spectrum of this thing in the world," Brown says. "Nobody knew there was this little dip in the spectrum because no one had the resolution to zoom in on it before."

The two researchers racked their brains to come up with materials that might explain the new spectroscopic feature, and then tested everything from sodium chloride to Drano in Hand's lab at JPL, where he tries to simulate the environments found on various icy worlds. "We tried to think outside the box to consider all sorts of other possibilities, but at the end of the day, the magnesium sulfate persisted," Hand says.

Some scientists had long suspected that magnesium sulfate was on the surface of Europa. But, Brown says, "the interesting twist is that it doesn't look like the magnesium sulfate is coming from the ocean." Since the mineral he and Hand found is only on the trailing side, where the moon is being bombarded with sulfur from Io, they believe that there is a magnesium-bearing mineral everywhere on Europa that produces magnesium sulfate in combination with sulfur. The pervasive magnesium-bearing mineral might also be what makes up the nonwater ice detected on the leading hemisphere's surface.

Brown and Hand believe that this mystery magnesium-bearing mineral is magnesium chloride. But magnesium is not the only unexpected element on the surface of Europa. Fifteen years ago, Brown showed that Europa is surrounded by an atmosphere of atomic sodium and potassium, presumably originating from the surface. The researchers reason that the sodium and potassium chlorides are actually the dominant salts on the surface of Europa, but that they are not detectable because they have no clear spectral features.

The scientists combined this information with the fact that Europa's ocean can only be one of two types—either sulfate-rich or chlorine-rich. Having ruled out the sulfate-rich version since magnesium sulfate was found only on the trailing side, Brown and Hand hypothesize that the ocean is chlorine-rich and that the sodium and potassium must be present as chlorides.

Therefore, Brown says, they believe the composition of Europa's sea closely resembles the salty ocean of Earth. "If you could go swim down in the ocean of Europa and taste it, it would just taste like normal old salt," he says.

Hand emphasizes that, from an astrobiology standpoint, Europa is considered a premier target in the search for life beyond Earth; a NASA-funded study team led by JPL and the Johns Hopkins University Applied Physics Laboratory have been working with the scientific community to identify options to explore Europa further.  "If we've learned anything about life on Earth, it's that where there's liquid water, there's generally life," Hand says. "And of course our ocean is a nice salty ocean. Perhaps Europa's salty ocean is also a wonderful place for life."

The Astronomical Journal paper is titled "Salts and radiation products on the surface of Europa." The work was supported, in part, by the NASA Astrobiology Institute through the Astrobiology of Icy Worlds node at JPL. 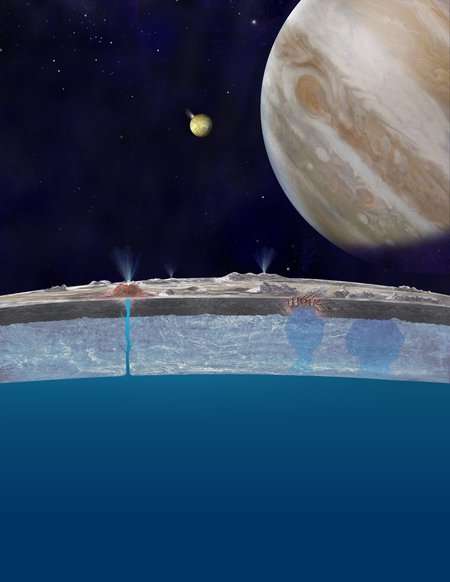 Based on new evidence from Jupiter's moon Europa, astronomers hypothesize that chloride salts bubble up from the icy moon's global liquid ocean and reach the frozen surface where they are bombarded with sulfur from volcanoes on Jupiter's largest moon, Io. The new findings propose answers to questions that have been debated since the days of NASA's Voyager and Galileo missions. This illustration of Europa (foreground), Jupiter (right) and Io (middle) is an artist's concept. Credit: NASA/JPL-Caltech
Image Lightbox 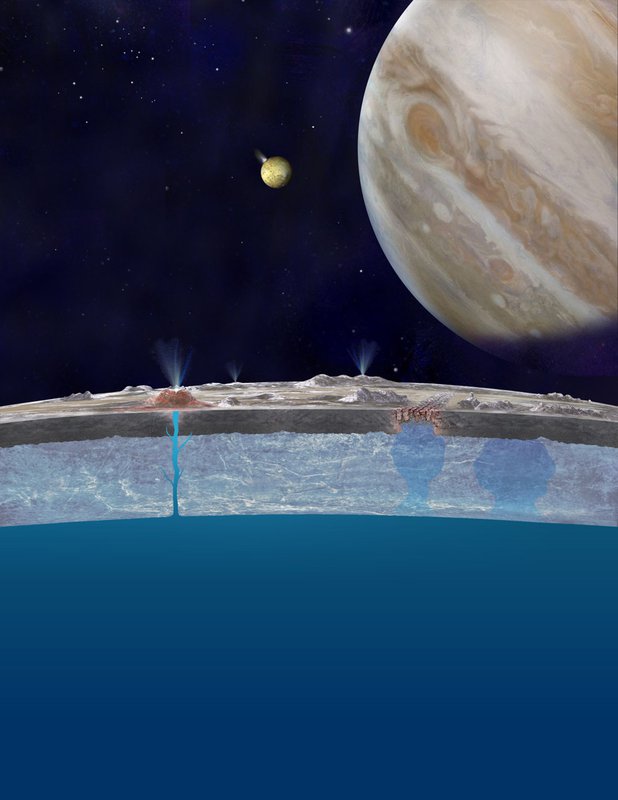 Based on new evidence from Jupiter's moon Europa, astronomers hypothesize that chloride salts bubble up from the icy moon's global liquid ocean and reach the frozen surface where they are bombarded with sulfur from volcanoes on Jupiter's largest moon, Io. The new findings propose answers to questions that have been debated since the days of NASA's Voyager and Galileo missions. This illustration of Europa (foreground), Jupiter (right) and Io (middle) is an artist's concept.
Credit: NASA/JPL-Caltech
Download Full Image
Subscribe
The Caltech Weekly