On November 12 and 13, the Beckman Institute at Caltech hosted a symposium on "The Shared Legacy of Arnold Beckman and Harry Gray." The two began a close working relationship in the late 1960s, when Gray arrived at Caltech. In this interview, Gray provides some background.

How did you come to Caltech?

When I got to Northwestern I met Fred Basolo, who became my mentor. He did inorganic chemistry, which I was very surprised to discover even existed as a research field. I was so excited by his work, which was studying the mechanisms of inorganic reactions, that I decided to switch fields and do what he did. I got my PhD in 1960 from work on the syntheses and reaction mechanisms of platinum, rhodium, palladium, and nickel complexes. A complex has a metal atom sitting in the middle of as many as six ions or molecules called ligands. The metal has empty orbitals that it wants to fill with paired-up electrons, and the ligands have electron pairs they aren't using, so the metal and its ligands form stable bonds.

I had gotten into chemistry in the first place because I'd always been interested in colors. Even when I was a little kid, colors fascinated me. I really wanted to understand them, and many complexes have brilliant, beautiful colors. At Northwestern I heard about crystal-field theory, which was the first attempt to explain how metal complexes got their colors. All the crystal-field theory's big shots were in Copenhagen, so I decided to go there as a postdoc. Which I did.

I soon found out that crystal-field theory didn't go far enough. It only explained the colors of a limited set of metal ions in solution, and it couldn't explain charge transfers and a lot of other things. All the atoms were treated as point charges, with no provision for the bonds between the metal and the ligands. There weren't any bonds. So I helped develop a new theory, called ligand-field theory, which put the bonds back in the complexes. Carl Ballhausen, a professor at the University of Copenhagen, and I wrote a paper on a "metal-oxo" complex in which an oxygen atom was triple-bonded to a vanadium ion. The triple bond in our theory was required to account for the blue color of the vanadium-oxo complex. We also could explain charge transfers in other oxo complexes. Bonds were back in metal complexes!

Metal-oxo bonds are very important in biology. They are crucial in a lot of reactions, such as the oxygen-producing side of photosynthesis; the metabolism of drugs by cytochrome P-450, which often leads to toxic interactions with other drugs; and respiration. When we breathe in O2, our respiratory system splits the O=O bond, forming a metal-oxo complex as a reactive intermediate on the way to the product, which is water.

My work on bonding in metal oxo complexes got me a job as an assistant professor at Columbia University in 1961. By '65 I was a full professor and getting offers from many places, including Caltech. I loved Columbia, and I would have stayed there, but the chemistry department was very small. I knew it would be hard to build inorganic chemistry in a small department that concentrated on organic and physical chemistry.

There weren't any inorganic chemists at Caltech, either, but division chair Jack Roberts encouraged me to build the field up to five or six faculty members. I came to Caltech in 1966, and we now have a very strong inorganic chemistry group.

When I got here, I started work in two new areas at the interface of inorganic chemistry and biology. I'm best known for my work showing how electrons flow through proteins in respiration and photosynthesis. I won the Wolf Prize and the Welch Prize and the National Medal of Science for this work.

I also got into inorganic photochemistry—solar-energy research. That work started well before the first energy crisis in 1973, and continued until oil became cheap again in the early 1980s and solar-energy research was no longer supported. In the late '90s, I restarted the work. Now I'm leading an NSF Center for Chemical Innovation in Solar Fuels, which has an outreach activity I proudly call the Solar Army.

And how's that going?

The Solar Army keeps growing. We now have at least 60 brigades at high schools across the U.S., and 10 more abroad. I'd say that about 1,000 students have been through the program since 2008. We're getting young scientists involved in research that could have a profound effect on the world they're going to inherit. They're helping us look for light absorbers and catalysts to turn water into hydrogen fuel, using nothing but sunlight. The solar materials need to be sturdy metal oxides that are abundant and dirt cheap. But there are many metals in the periodic table. When you start combining them in twos and threes in varying amounts, there are literally millions of possibilities to be tested. We already have found several very good water oxidation and reduction catalysts, and since the National Science Foundation has just renewed our CCI Solar Fuels grant, we expect to make great progress in the coming years in understanding how they work.

Let's shift gears and talk about the Beckman Institute. How did you first meet Arnold Beckman [PhD '28, inventor of the pH meter, founder of Beckman Instruments, and a Life Trustee of Caltech]?

I gave a talk back in 1967, probably on Alumni Day. Arnold was the chair of Caltech's Board of Trustees at the time, and he and his wife, Mabel, were seated in the second row. When the talk was over, they came down and introduced themselves. Mabel said—and I remember this very well—she said, "Arnold, I didn't understand much of what this young man said, but I really liked the way he said it." Arnold gave me the thumbs up, and that started our relationship.

When I became chairman of the Division of Chemistry and Chemical Engineering in 1978, I asked him to be on my advisory committee. I didn't ask him for money, but I asked him for advice, and we became quite close. He said he wanted to do something for us. That led to his gift for the Arnold and Mabel Beckman Laboratory of Chemical Synthesis, as well as a gift for instrumentation.

He liked it that we raised money to match his instrument gift. He told me that he wanted to do something bigger, so we started thinking about building the Beckman Institute. [Caltech President] Murph Goldberger and I would go down to Orange County about every week with a new plan. He rejected the first four or five until we came up with the idea of developing technology to support chemistry and biology—methods and instruments for fundamental research—and creating resource centers to house them.

Once we agreed on what the building should house, we started planning the building itself. But when we showed Arnold our design, which was four stories plus a basement, he said, "That's not big enough. You need another floor for growth." So we added a subbasement that was quickly occupied by a resource center for magnetic-resonance imaging and optical imaging that has been heavily used by biologists, chemists, and other investigators.

The Beckman Institute has done a lot over the last 25 years. But it develops technology for general research use, so it doesn't often make the headlines itself. Are you OK with that?

Many advances in science and technology have been made in the Beckman Institute over the last 25 years. The methods and instruments that have been developed in BI resource centers have made enormous impacts at the frontiers of chemistry and biology. Solar-fuels science and human biology are just two examples of areas where work in the Beckman Institute has made a big difference. And there are many more. Am I proud? You bet I am! 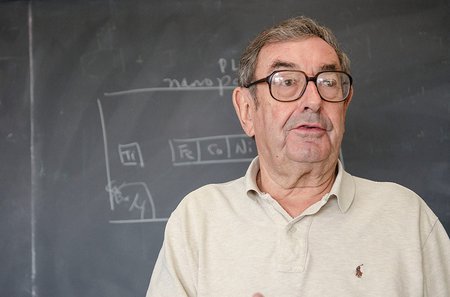 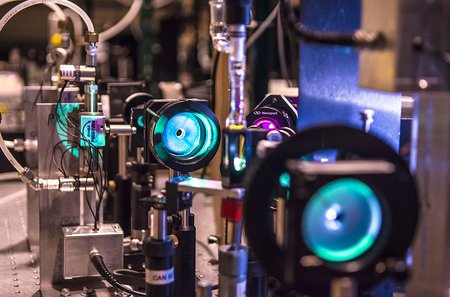 A small portion of an optical train in the Beckman Institute Laser Resource Center. The apparatus is used to study how electrons leap between metal atoms in proteins. Credit: Lance Hayashida/Caltech 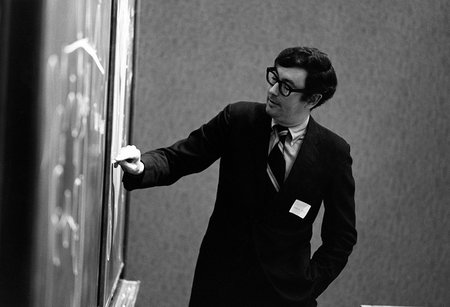 Caltech chemistry professor Harry Gray at the chalkboard in a 1970 photo. 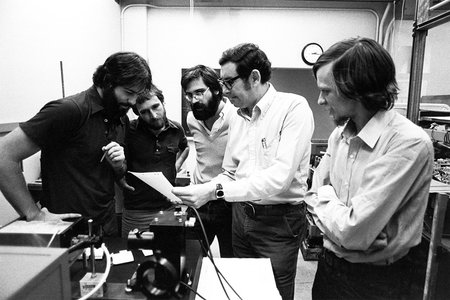 Caltech chemistry professor Harry Gray (center) and some members of his research group in a 1979 photo. Credit: Caltech Archives 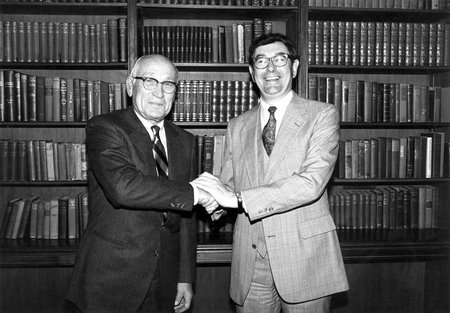 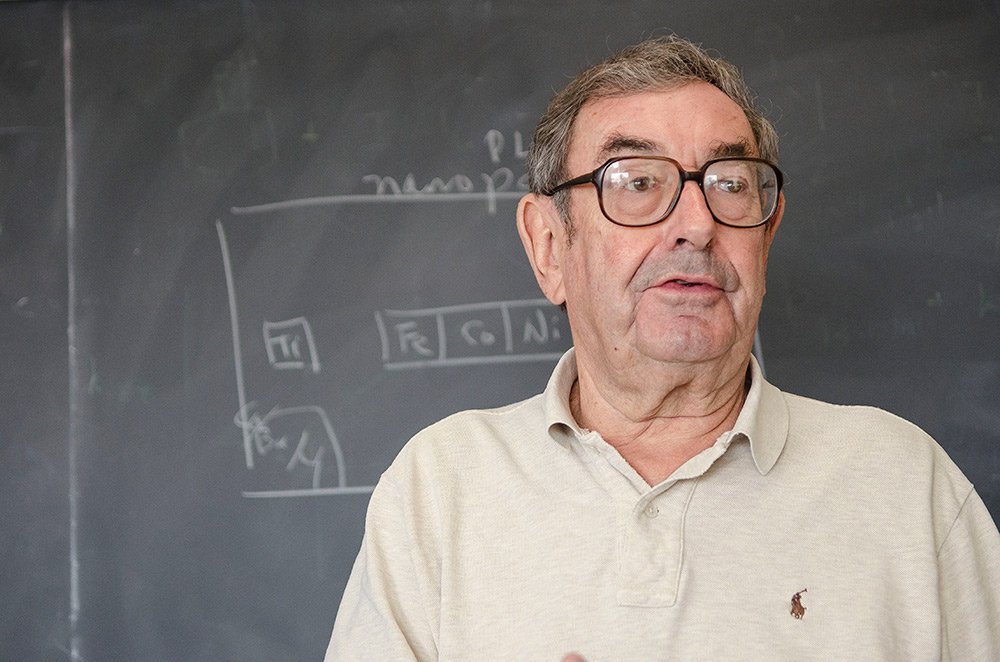 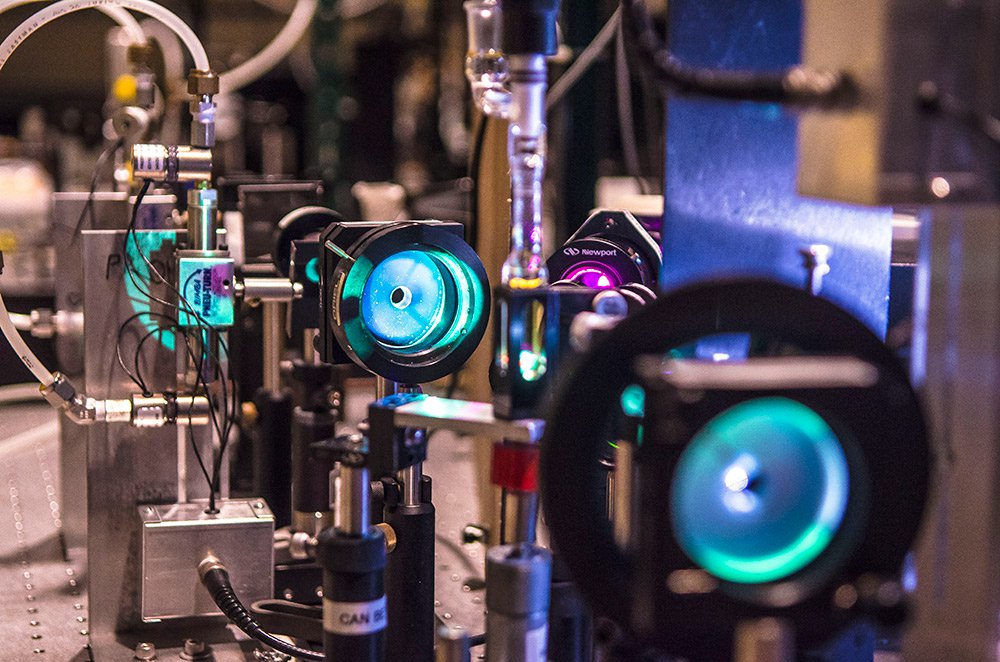 A small portion of an optical train in the Beckman Institute Laser Resource Center. The apparatus is used to study how electrons leap between metal atoms in proteins.
Credit: Lance Hayashida/Caltech
Download Full Image 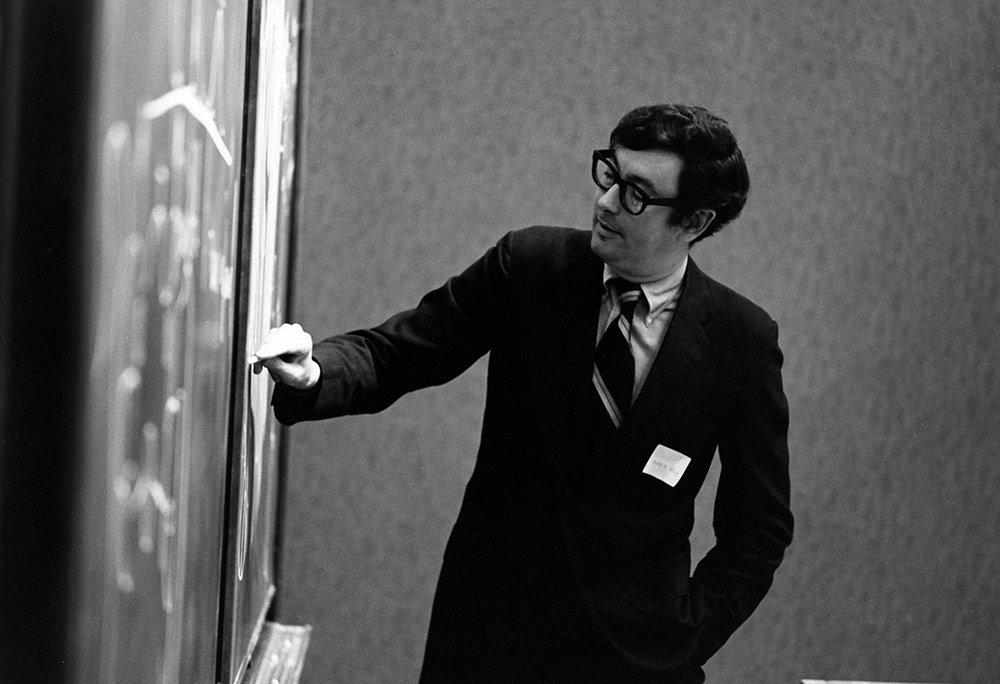 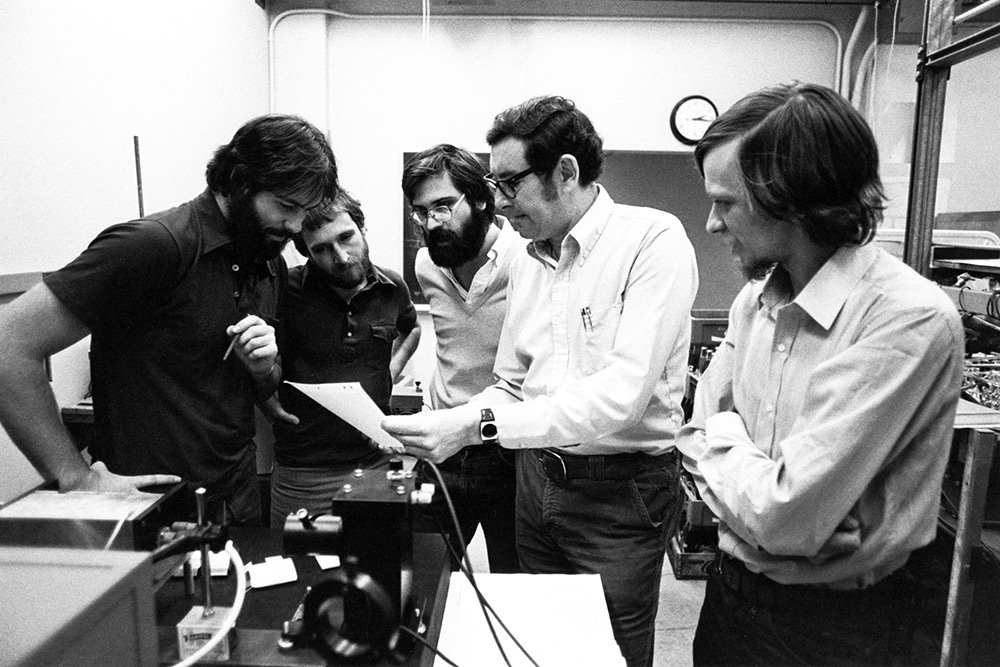 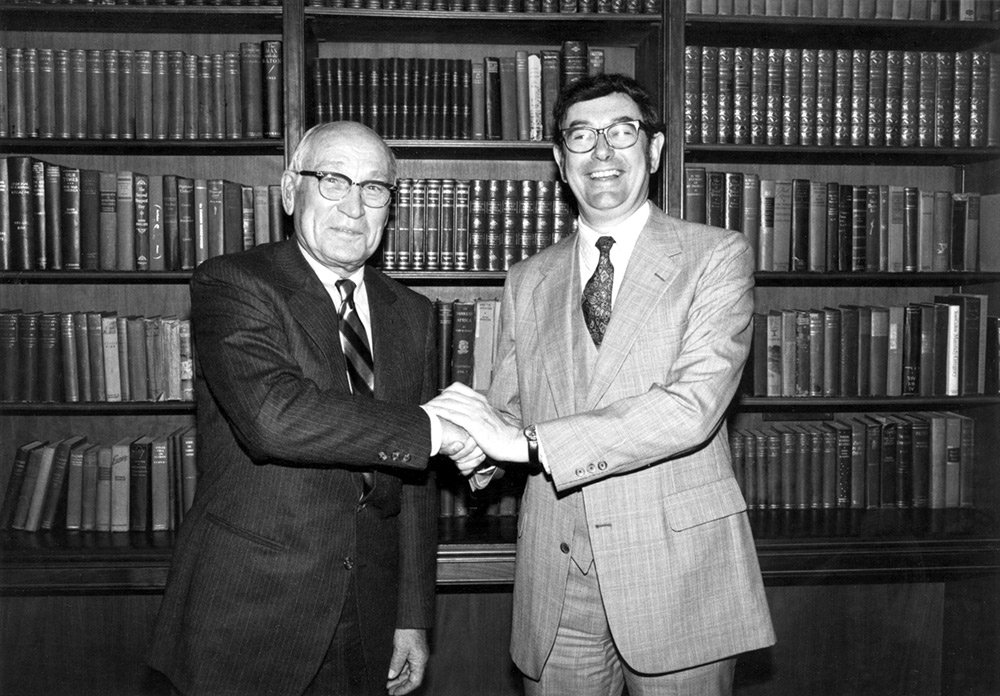