One of the most cataclysmic events to occur in the cosmos involves the collision of two black holes. Formed from the deathly collapse of massive stars, black holes are incredibly compact—a person standing near a stellar-mass black hole would feel gravity about a trillion times more strongly than they would on Earth. When two objects of this extreme density spiral together and merge, a fairly common occurrence in space, they radiate more power than all the stars in the universe.

"Imagine taking 30 suns and packing them into a region the size of Hawaii. Then take two such objects and accelerate them to half the speed of light and make them collide. This is one of the most violent events in nature," says Vijay Varma, a graduate student at Caltech.

In a new study in the January 11 issue of the journal Physical Review Letters, Varma and his colleagues report the most accurate computer model yet of the end stage of black hole mergers, a period when a new, more massive black hole has formed. The model, which was aided by supercomputers and machine-learning, or artificial intelligence (AI) tools, will ultimately help physicists perform more precise tests of Einstein's general theory of relativity.

"We can predict what's left after a black hole merger—properties of the final black hole such as its spin and mass—with an accuracy 10 to 100 times better than what was possible before," says co-author Davide Gerosa, an Einstein Postdoctoral Fellow in Theoretical Astrophysics at Caltech. "This is important because tests of general relativity depend on how well we can predict the end states of black hole mergers."

One of the goals of LIGO and the thousands of scientists analyzing its data is to better understand the physics of black hole collisions—and to use these data, in turn, to assess whether Einstein's general theory of relativity still holds true under these extreme conditions. A breakdown of the theory might open the door to new types of physics not yet imagined.

But creating models of colossal events like black hole collisions has proved to be a daunting task. As the colliding black holes become very close to one another, just seconds before the final merger, their gravitational fields and velocities become extreme and the math becomes far too complex for standard analytical approaches.

"When it comes to modeling these sources, one can use the pen-and-paper approach to solve Einstein's equations during the early stages of the merger when the black holes are spiraling toward each other," says Varma. "However, these schemes break down near the merger. Simulations using the equations of general relativity are the only means to predict the outcome of the merger process accurately."

That is where supercomputers help out. The team took advantage of nearly 900 black hole merger simulations previously run by the Simulating eXtreme Spacetimes (SXS) group using the Wheeler supercomputer at Caltech (supported by the Sherman Fairchild Foundation) and the Blue Waters supercomputer at the National Center for Supercomputing Applications (NCSA) at the University of Illinois at Urbana-Champaign. The simulations took 20,000 hours of computing time. The Caltech scientists' new machine-learning program, or algorithm, learned from the simulations and helped create the final model.

"Now that we have built the new model, you don't need to take months," says Varma. "The new model can give you answers about the end state of mergers in milliseconds."

The researchers say that their model will be of particular importance in a few years, as LIGO and other next-generation gravitational-wave detectors become more and more precise in their measurements. "Within the next few years or so, gravitational-wave detectors will have less noise," says Gerosa. "The current models of the final black hole properties won't be precise enough at that stage, and that's where our new model can really help out."

The Physical Review Letters study, titled "High-accuracy mass, spin, and recoil predictions of generic black-hole merger remnants," was funded by the Sherman Fairchild Foundation, the National Science Foundation, NASA, the Brinson Foundation, and Caltech. Other authors includealumnus Leo Stein (BS '06) of the University of Mississippi and formerly a postdoctoral scholar at Caltech; François Hébert, a postdoctoral scholar at Caltech; and Hao Zhang of the University of Pennsylvania and formerly a Summer Undergraduate Research Fellow (SURF) at Caltech. 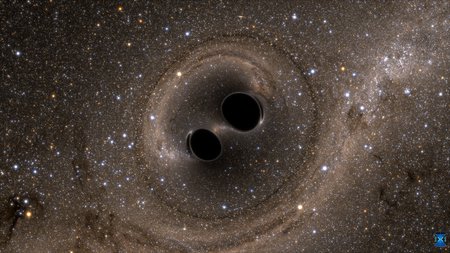 A simulated picture of two merging black holes, each about 30 solar masses. This is approximately what a human would see if they could travel in spaceship to take a closer look at merging black holes. Credit: SXS, the Simulating eXtreme Spacetimes (SXS) project (http://www.black-holes.org) This simulation shows the merging of a 20 solar-mass black hole with a 40 solar-mass black hole. A new model now predicts the end state of a merger with the greatest accuracy yet, including the final black hole's spin, mass, and recoil velocity, or "kick." The black holes' spins are indicated with arrows—because they differ from the orbital angular momentum (pink arrow), the orbit wobbles, or precesses. The blue and red orbs indicate patterns of gravitational waves generated in the collision. Credit: Caltech/Vijay Varma
Image Lightbox 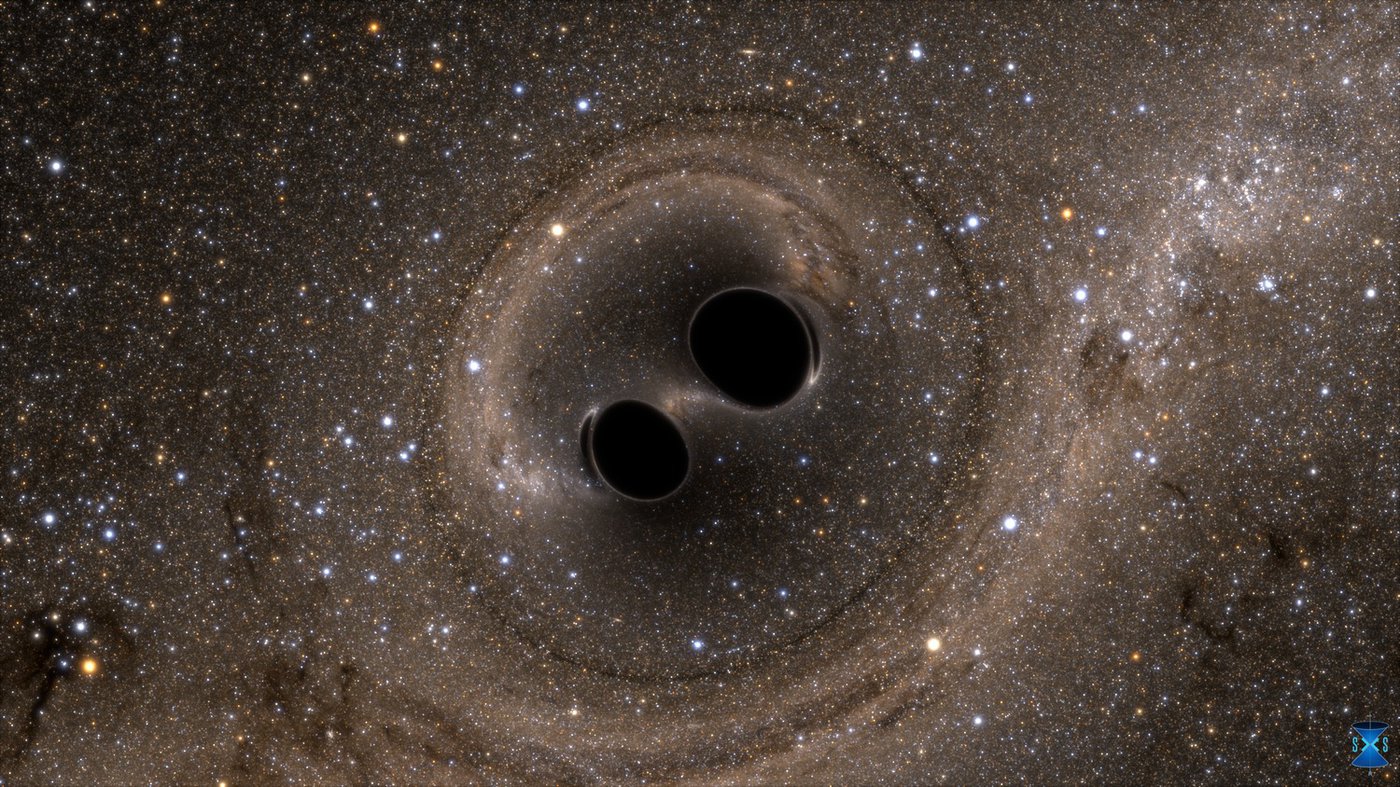 A simulated picture of two merging black holes, each about 30 solar masses. This is approximately what a human would see if they could travel in spaceship to take a closer look at merging black holes.
Credit: SXS, the Simulating eXtreme Spacetimes (SXS) project (http://www.black-holes.org)
Download Full Image
Subscribe
The Caltech Weekly