Skip to main content
Home  /  About  /  News  /  What Is it Like to Be a Caltech Seismologist during a Big Quake?

What Is it Like to Be a Caltech Seismologist during a Big Quake?

When an earthquake strikes, seismologists at Caltech's Seismological Laboratory spring into action.

An arm of Caltech's Division of Geological and Planetary Sciences (GPS), the Seismo Lab is home to dozens of seismologists who collaborate with the United States Geological Survey (USGS) to operate one of the largest seismic networks in the nation.Together, they analyze data to provide the public with information about where the quake occurred and how big it was. That information not only helps first responders, but feeds into the scientific understanding on earthquakes and when and where the next big quakes are likely to strike.

After the two largest Ridgecrest earthquakes on July 4 and 5 (Magnitude 6.4 and 7.1, respectively), Caltech staff seismologist Jen Andrews was part of the Seismo Lab team that rushed to respond. Recently, she described that experience.

Where were you when the earthquakes hit?

For Thursday's quake, I was at home in my shower. I didn't even realize at the time that it was a quake. But when I got out and looked at my computer, I saw the report. Then the phone rang, and it was Egill [Hauksson, research professor of geophysics at Caltech], saying it was time to go to work. It was all hands on deck.

For Friday's quake, I was at the ballet at the Dorothy Chandler Pavilion in Downtown Los Angeles. They'd just finished act 1 and were in intermission, so fortunately no dancers were on stage to be knocked off their feet. I was in the balcony, so the movement I felt was probably amplified by the height (and also the soft sediment beneath Downtown). The chandeliers were swaying, but no one panicked. As soon as I felt it shake, I started counting. We felt it as a roll, so I knew the epicenter wasn't right beneath us. Once I reached 20 seconds, I knew this was a big earthquake, even bigger than the first one. I immediately got in a taxi and headed straight to campus.

What did you do next?

Here at the Seismo Lab, it's our responsibility to verify that all of the info we're putting out about earthquakes—the locations and magnitudes, for example—are correct. We're responsible for getting info about the origin out within two minutes of the shaking, so we have fully automated systems that send updates to the National Earthquake Information Center right away. All of that happens without anyone touching anything, before we can even get to our desks. But once we get there, we look at the waveforms and make sure that we're correctly identifying the P and S waves. [During an earthquake, several types of seismic waves radiate out from the quake's epicenter, including compressional waves (or P-waves), transverse waves (or S-waves), and surface waves.] We also know the speed at which seismic waves should travel, so we can use that to make sure that we're correctly identifying where the quake originated. It turns out that the automatic systems did a brilliant job of getting most of the information correct.

What is it like to be in the Seismo Lab after a big earthquake?

It's very busy. There's a lot of people: seismologists, news reporters, even curious students and people who are on campus who just want to know what's going on. Meanwhile, we have a lot of issues to deal with: we have seismologists on the phone with state representatives and others speaking to members of the press, while still others are trying to process data coming in from seismometers. Within a few hours of a quake, the USGS tries to figure out who's going out to the location of the earthquake, and what equipment they'll be taking. For the Ridgecrest quakes, they did flyovers in a helicopter looking for ruptures, and then sent people on the ground to measure the rupture. They then deployed additional seismometers so that we could get an even clearer picture of any aftershocks.

How long after the earthquake will things stay busy for you?

The media attention relaxes after a few hours or days, but I'm going to be looking at the data we gathered from these quakes for a long time. I was here every day over the holiday weekend and the following week working on it. It could take months or even years for our group to process all the data.

Do you learn more from big earthquakes like these than you do from little ones?

You learn different things. The data will be incorporated into earthquake hazard models, though likely will not make big changes. But these quakes in particular were interesting, as two perpendicular faults were involved. We can study the rupture dynamics, which you can't resolve in smaller quakes. Also, having two strong quakes caused variations in fault slip and ground motion that will be important to study and understand. 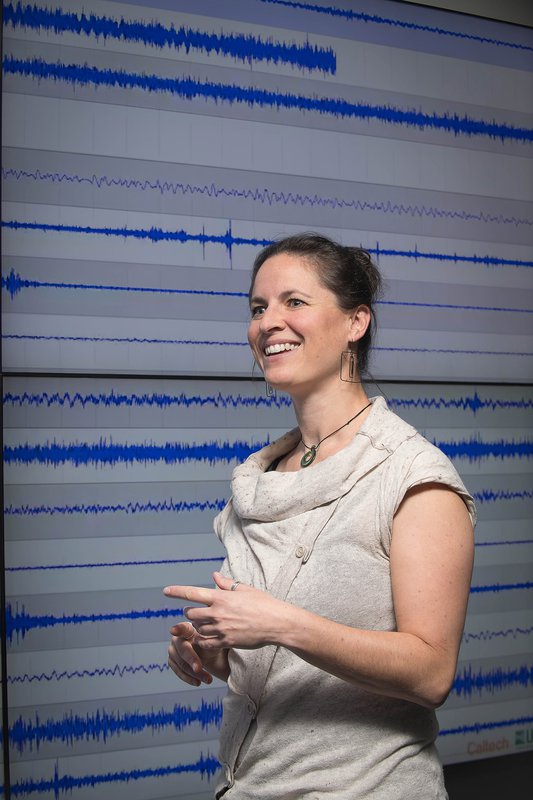