PASADENA, Calif.—Protein engineers at the California Institute of Technology (Caltech) have tapped into a hidden talent of one of nature's most versatile catalysts. The enzyme cytochrome P450 is nature's premier oxidation catalyst—a protein that typically promotes reactions that add oxygen atoms to other chemicals. Now the Caltech researchers have engineered new versions of the enzyme, unlocking its ability to drive a completely different and synthetically useful reaction that does not take place in nature.

The new biocatalysts can be used to make natural products—such as hormones, pheromones, and insecticides—as well as pharmaceutical drugs, like antibiotics, in a "greener" way.

"Using the power of protein engineering and evolution, we can convince enzymes to take what they do poorly and do it really well," says Frances Arnold, the Dick and Barbara Dickinson Professor of Chemical Engineering, Bioengineering and Biochemistry at Caltech and principal investigator on a paper about the enzymes that appears online in Science. "Here, we've asked a natural enzyme to catalyze a reaction that had been devised by chemists but that nature could never do."

Arnold's lab has been working for years with a bacterial cytochrome P450. In nature, enzymes in this family insert oxygen into a variety of molecules that contain either a carbon-carbon double bond or a carbon-hydrogen single bond. Most of these insertions require the formation of a highly reactive intermediate called an oxene.

Arnold and her colleagues Pedro Coelho and Eric Brustad noted that this reaction has a lot in common with another reaction that synthetic chemists came up with to create products that incorporate a cyclopropane—a chemical group containing three carbon atoms arranged in a triangle. Cyclopropanes are a necessary part of many natural-product intermediates and pharmaceuticals, but nature forms them through a complicated series of steps that no chemist would want to replicate.

"Nature has a limited chemical repertoire," Brustad says. "But as chemists, we can create conditions and use reagents and substrates that are not available to the biological world."

The cyclopropanation reaction that the synthetic chemists came up with inserts carbon using intermediates called carbenes, which have an electronic structure similar to oxenes. This reaction provides a direct route to the formation of diverse cyclopropane-containing products that would not be accessible by natural pathways. However, even this reaction is not a perfect solution because some of the solvents needed to run the reaction are toxic, and it is typically driven by catalysts based on expensive transition metals, such as copper and rhodium. Furthermore, tweaking these catalysts to predictably make specific products remains a significant challenge—one the researchers hoped nature could overcome with evolution's help.

Given the similarities between the two reaction systems—cytochrome P450's natural oxidation reactions and the synthetic chemists' cyclopropanation reaction— Arnold and her colleagues argued that it might be possible to convince the bacterial cytochrome P450 to create cyclopropane-bearing compounds through this more direct route.  Their experiments showed that the natural enzyme (cytochrome P450) could in fact catalyze the reaction, but only very poorly; it generated a low yield of products, didn't make the specific mix of products desired, and catalyzed the reaction only a few times. In comparison, transition-metal catalysts can be used hundreds of times.

That's where protein engineering came in. Over the years, Arnold's lab has created thousands of cytochrome P450 variants by mutating the enzyme's natural sequence of amino acids, using a process called directed evolution. The researchers tested variants from their collections to see how well they catalyzed the cyclopropane-forming reaction. A handful ended up being hits, driving the reaction hundreds of times.

Being able to catalyze a reaction is a crucial first step, but for a chemical process to be truly useful it has to generate high yields of specific products. Many chemical compounds exist in more than one form, so although the chemical formulas of various products may be identical, they might, for example, be mirror images of each other or have slightly different bonding structures, leading to dissimilar behavior. Therefore, being able to control what forms are produced and in what ratio—a quality called selectivity—is especially important.

Controlling selectivity is difficult. It is something that chemists struggle to do, while nature excels at it. That was another reason Arnold and her team wanted to investigate cytochrome P450's ability to catalyze the reaction.

"We should be able to marry the impressive repertoire of catalysts that chemists have invented with the power of nature to do highly selective chemistry under green conditions," Arnold says.

So the researchers further "evolved" enzyme variants that had worked well in the cyclopropanation reaction, to come up with a spectrum of new enzymes. And those enzymes worked—they were able to drive the reaction many times and produced many of the selectivities a chemist could desire for various substrates.

Coelho says this work highlights the utility of synthetic chemistry in expanding nature's catalytic potential. "This field is still in its infancy," he says. "There are many more reactions out there waiting to be installed in the biological world."

The paper, "Olefin cyclopropanation via carbene insertion catalyzed by engineered cytochrome P450 enzymes," was also coauthored by Arvind Kannan, now a Churchill Scholar at Cambridge University; Brustad is now an assistant professor at the University of North Carolina at Chapel Hill. The work was supported by a grant from the U.S. Department of Energy and startup funds from UNC Chapel Hill. 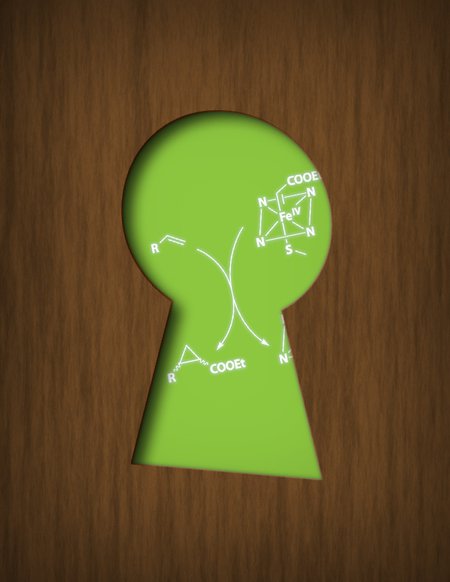 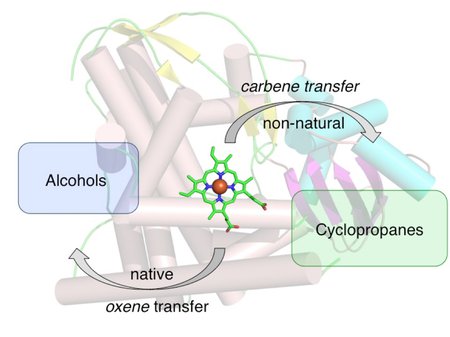 Nature uses cytochrome P450 to make alcohols. The enzyme can be engineered to make cyclopropanes via an artificial reaction relevant to the creation of many biologically active compounds. Credit: Coelho, Brustad / Caltech
Image Gallery Lightbox 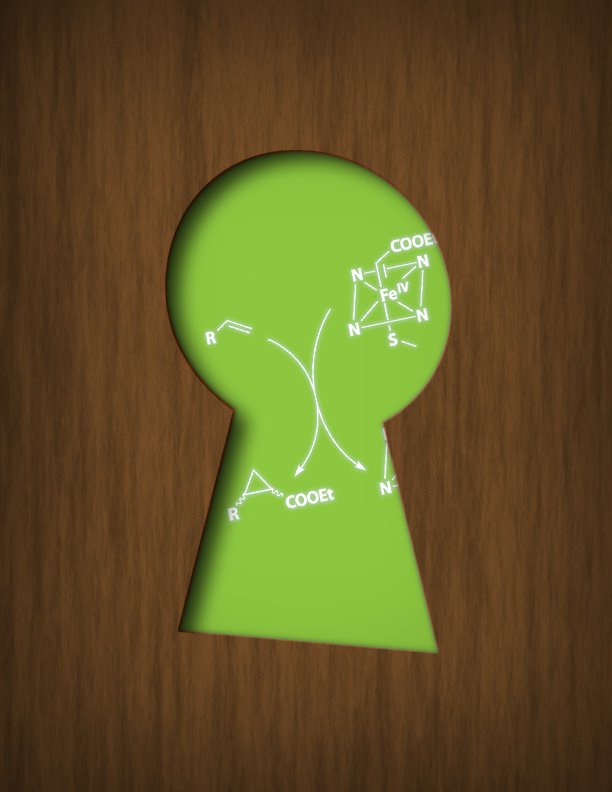 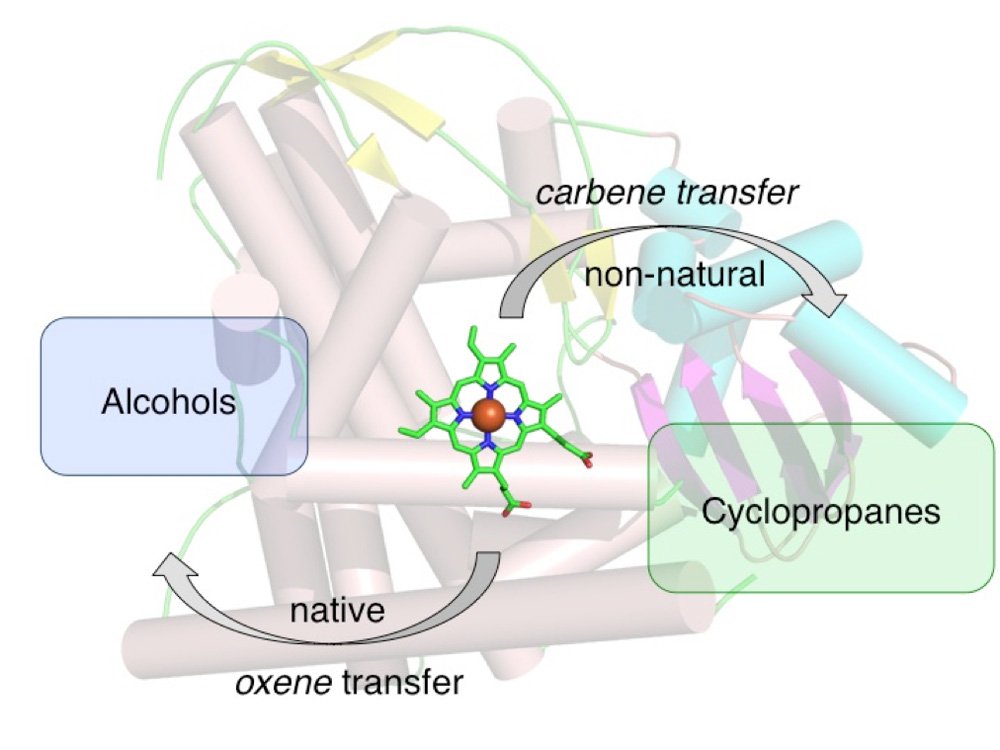 Nature uses cytochrome P450 to make alcohols. The enzyme can be engineered to make cyclopropanes via an artificial reaction relevant to the creation of many biologically active compounds.
Credit: Coelho, Brustad / Caltech
Download Full Image