Unlocking the Chemistry of Life

In just the span of an average lifetime, science has made leaps and bounds in our understanding of the human genome and its role in heredity and health—from the first insights about DNA structure in the 1950s to the rapid, inexpensive sequencing technologies of today. However, the 20,000 genes of the human genome are more than DNA; they also encode proteins to carry out the countless functions that are key to our existence. And we know much less about how this collection of proteins supports the essential functions of life.

In order to understand the role each of these proteins plays in human health—and what goes wrong when disease occurs—biologists need to figure out what these proteins are and how they function. Several decades ago, biologists realized that to answer these questions on the scale of the thousands of proteins in the human body, they would have to leave the comfort of their own discipline to get some help from a standard analytical-chemistry technique: mass spectrometry. Since 2006, Caltech's Proteome Exploration Laboratory (PEL) has been building on this approach to bridge the gap between biology and chemistry, in the process unlocking important insights about how the human body works.

Scientists can easily sequence an entire genome in just a day or two, but sequencing a proteome—all of the proteins encoded by a genome—is a much greater challenge says Ray Deshaies, protein biologist and founder of the PEL. "One challenge is the amount of protein. If you want to sequence a person's DNA from a few of their cheek cells, you first amplify—or make copies of—the DNA so that you'll have a lot of it to analyze. However, there is no such thing as protein amplification," Deshaies says. "The number of protein molecules in the cells that you have is the number that you have, so you must use a very sensitive technique to identify those very few molecules."

The best means available for doing this today is called shotgun mass spectrometry, Deshaies says. In general, mass spectrometry allows researchers to identify the amount and types of molecules that are present in a biological sample by separating and analyzing the molecules as gas ions, based on mass and charge; shotgun mass spectrometry—a combination of several techniques—applies this separation process specifically to digested, broken-down proteins, allowing researchers to identify the types and amounts of proteins that are present in a heterogeneous mixture.

"Up until this technique was invented, people had to take a mixture of proteins, run a current through a polyacrylamide gel to separate the proteins by size, stain the proteins, and then physically cut the stained bands out of the gel to have each individual protein species sequenced," says Deshaies. "But mass spectrometry technology has gotten so good that we can now cast a broader net by sequencing everything, then use data analysis to figure out what specific information is of interest after the dust settles down."

For more about the PEL, visit E&S+. 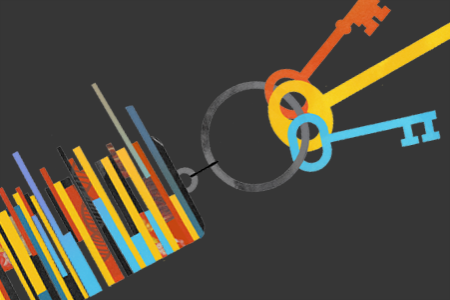