A pair of top administrators for the French and Indian national space agencies were named recipients of the 2018 International von Kármán Wings Award. This year's honorees are Jean-Yves Le Gall, president of the French Centre National d'Études Spatiales (CNES) and A. S. Kiran Kumar, Vikram Sarabhai Professor and former chairman of the Indian Space Research Organization (ISRO) and former secretary of the Indian Department of Space. Le Gall and Kumar received the award at a ceremony at the Athenaeum on November 8.

The honor—administered by the Aerospace Historical Society (AHS) and the Graduate Aerospace Laboratories of the California Institute of Technology (GALCIT)—recognizes the efforts of the two leaders in fostering greater international cooperation in space exploration. As noted by Caltech president Thomas Rosenbaum at the ceremony, "We are able to stand tall and see far because of our partnerships with like-minded nations." The event is cohosted by JPL, which Caltech manages for NASA.

The ceremony also featured the presentation of two scholarships to honor top graduate students in aerospace. "This event is absolutely unique," said Ares Rosakis, the Theodore von Kármán Professor of Aeronautics and Mechanical Engineering and chairman of the AHS. "What makes it so is that it reflects the phenomenal international connections between Caltech, GALCIT, JPL, and NASA and it also highlights the true international nature of aerospace through a special relationship with our valued international partners, CNES and ISRO, being honored tonight. More importantly, it gives us the opportunity to take a glimpse at the future by also honoring our own students who will one day define the future of space science and the future of space technology."

Le Gall, an engineer and scientist, has served as president of CNES since 2013. He is interministerial coordinator for satellite navigation programs and chair of the Administrative Board of the European Global Navigation Satellite Systems (GNSS) Agency. He is also co-chair of the council of the European Space Agency (ESA) and president of the International Astronautical Federation (IAF). Le Gall has devoted his entire career to the European space program, having held positions within the Centre National de la Recherche Scientifique (CNRS) and several French ministries.

Le Gall has received numerous honors and awards, including the Astronautics Prize from the French Association of Aeronautics and Astronautics (AAAF) in 2001. In 2011, he was inducted into the Hall of Fame of the Society of Satellite Professionals International (SPPI), and in 2014, he received a Laureate Award from Aviation Week & Space Technologymagazine. He holds the rank of Officer in both the Legion of Honor and the National Order of Merit in France. He has also been awarded the Order of Friendship by the Russian Federation and the Order of the Rising Sun, Gold and Silver Star, by the government of Japan.

"I am very, very humbled and honored to receive the von Kármán Wings Award, and being here, as always, brings back a lot of warm memories," said Le Gall, who spent time at Caltech as a student in 1983. "My work has been committed to international cooperation in space and both my past and present positions have given me the wonderful opportunity to meet really outstanding individuals with whom we joined our efforts to take up ever bolder challenges. ... I am very proud of the work we have been able to achieve."

From January 2015 to January 2018, Kumar served as secretary of India's Department of Space, chairman of the Indian government's Space Commission, and chairman of ISRO. In this capacity, he implemented applications-oriented space programs that facilitated the rapid development of the country's expertise in many important spheres, including earth observation, communication, navigation, meteorology, and space science. He played a crucial role in several ISRO missions including the Chandrayaan-1 moon mission, the Mars Orbiter Mission, and a Reusable Launch Vehicle–Technology Demonstrator.

Kumar has won numerous awards and honors including the Padma Shri award from the president of India in 2014, in recognition of his contributions. Kumar was honored by the government of the Indian state of Karnataka in 2015 for his contribution to space science and technology and received a Lifetime Achievement Award from the Karnataka Science and Technology Academy in 2016.

Kumar thanked those in attendance for sharing with him "a momentous occasion in my life when my name is getting associated with legendary personalities who have made huge contributions to humanity by their knowledge, hard work, and focused perseverance in the areas of aerospace activities," he said.

"When you look at the list of people who have been bestowed with this honor, I realize that this is like a dream. ... I also realize that the Aerospace Historical Society and GALCIT are recognizing, through me, the Indian Space Research Organization for the outstanding efforts to make use of space technology for fostering and enabling the developing of an independent nation which obtained its independence recently," Kumar said.

At the banquet, Rosakis also awarded the Shirley Thomas Academic Scholarship—given annually to a student in aerospace, aeronautics, or a related program who demonstrates promise for continued contribution to the field—to Silken Jones, a fourth-year graduate student in the lab of Joseph Shepherd, Caltech's C. L. "Kelly" Johnson Professor of Aeronautics and Mechanical Engineering. Jones is working on a project funded by Boeing to develop innovative methods for evaluating flammability and combustion hazards of aircraft. Rosakis next presented the newly established Victoria Alegria Tracy scholarship, to be given annually to a female and/or an underrepresented minority studentin space or aeronautical engineering, or a related discipline, who has shown exceptional promise for continued future contributions to the field.The scholarship was created by John Tracy, former chief technology officer at Boeing and recipient of the 2014 von Kármán Wings Award. The award was given to Cecilia Huertas Cerdeira, a fifth-year graduate student in the lab of Mory Gharib, Caltech's Hans W. Liepmann Professor of Aeronautics and Bioinspired Engineering. Huertas Cerdeira studies solid/fluid interactions and, in particular, the elasticity of thin plates, in an effort to both improve the performance of wind-energy harvesters through the use of flapping plates and to develop fish-inspired propellers for underwater drones. 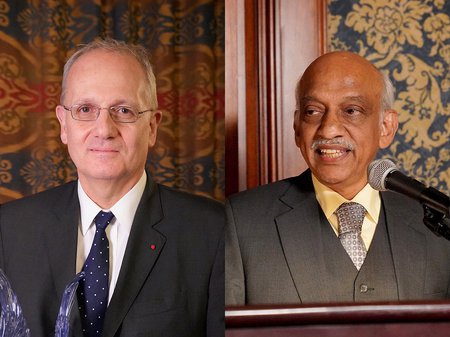 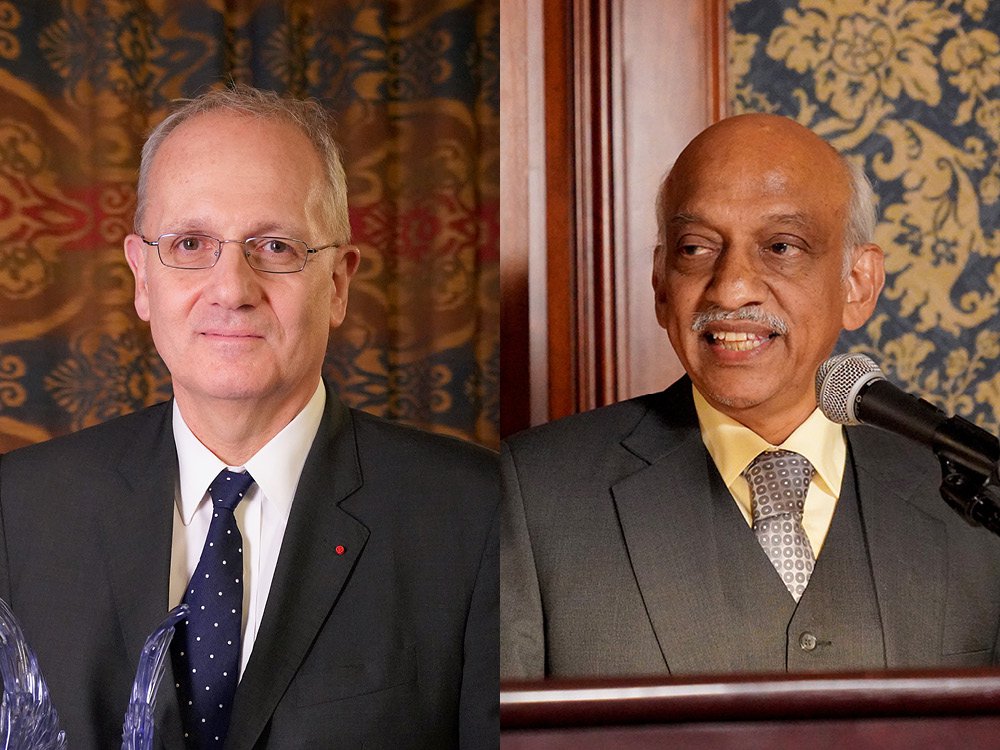