Caltech seniors Adam Jermyn and Charles Tschirhart have been named 2015 Hertz Fellowship winners. Selected from a pool of approximately 800 applicants, the awardees will receive up to five years of support for their graduate studies. According to the Hertz Foundation, fellows are chosen for their intellect, their ingenuity, and their potential to bring meaningful improvement to society. Jermyn and Tschirhart bring the number of Caltech undergraduate Hertz fellows to 60.

Adam Jermyn, a physics major from Longmeadow, Massachusetts, works with so-called "emergent phenomena," which "is a broad term referring to situations where we know all of the laws on a fundamental level but where there are so many pieces working together that the consequences aren't known," he says. For example, the basic laws governing fluid mechanics are simple equations that relate such easily measured quantities as density, velocity, and temperature to one another, but simulating the behavior of two gases as they mix in a turbulent flow can tax the capacity of a supercomputer.

Jermyn's senior thesis models how a pulsar—a type of celestial radio source that flashes as fast as a thousand times per second—disrupts the atmosphere of a companion star. Pulsars are neutron stars—supernova cinders that pack the mass of a couple of suns into a sphere roughly the size of Manhattan. The spin imparted by the supernova's explosion and equally violent collapse creates a beam of tightly focused radio waves. If a neutron star were "aimed" at Earth, the beam's fleeting illumination would register as a flash in our radio telescopes every time it swept across us. Meanwhile, the pulsar's intense gravity distorts the companion star, creating a bulge on its surface. Like Earth's moon, the star's rotation is tidally locked, always presenting the same side to its dominant neighbor. The companion star's atmosphere gets siphoned away, layer by layer, forming a turbulent tendril of gas that winds in an ever-tightening spiral around the pulsar as the stolen material accretes onto its surface.

Charles Tschirhart of Naperville, Illinois, is a double major in applied physics and chemistry. His interests lie at the opposite end of the scale—in the world of nanotechnology, where lengths are measured in nanometers, or billionths of a meter. In the summer of 2012, he was part of a team that built nanoelectrodes—tiny silicon needles that penetrate a cell wall without damaging the cell to monitor the electrical activity within.

Tschirhart and Jermyn share an interest in fluid mechanics. "I think the biggest difference between what Adam and I do is that he is a theorist, and I am an experimentalist," Tschirhart says. "Physicists pretend that a fluid is a continuum of infinitely divisible matter and thus doesn't have any 'graininess' to it." But because atoms and molecules do have finite sizes, "once you get down to small enough scales," he says, "even water becomes 'grainy.'" The fluid becomes more viscous, as it takes effort to force the grains past one another. For his senior thesis, Tschirhart determined the nanoviscosity of silicone oil by measuring the thickness of a thin film of oil, smearing it even thinner with a stream of air and measuring its thickness again. The thickness should decrease in a linear manner, but this doesn't happen when the layer gets thin enough. "These films aren't much thicker than the size of a molecule," he says. "This is where noncontinuum effects show up." These effects could affect how engineers approach tasks as diverse as lubricating hard drives and extracting crude oil from porous rocks.

Both students took Physics 11, a course taught by the late Professor Thomas Tombrello. Tombrello launched this class in 1989 to teach encourage freshman to think creatively, and taught it annually until his death in September 2014. This year, Jermyn and Tschirhart are helping teach it. "Physics 11 really shaped the way I ask questions, and I have Tom Tombrello to thank for that," says Jermyn. "He pushed us to think about things obliquely," Tschirhart concurs. "After I got over my initial nerves, I found myself enjoying [the two rounds of Hertz interviews], which made it much easier to answer the questions creatively."

Both plan to defer their Hertz doctoral fellowships while they take advanced degrees in England. Tschirhart will be attending the University of Nottingham as a Fulbright Scholar for one year, where he plans to develop new applications for atomic force microscopy, a powerful technique for "photographing" nanoscale objects. Jermyn will be at the University of Cambridge for two years as a Marshall Scholar investigating the processes by which planets form around binary star systems. 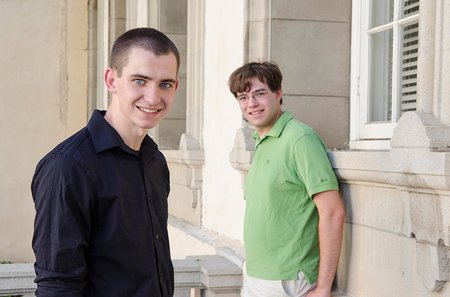 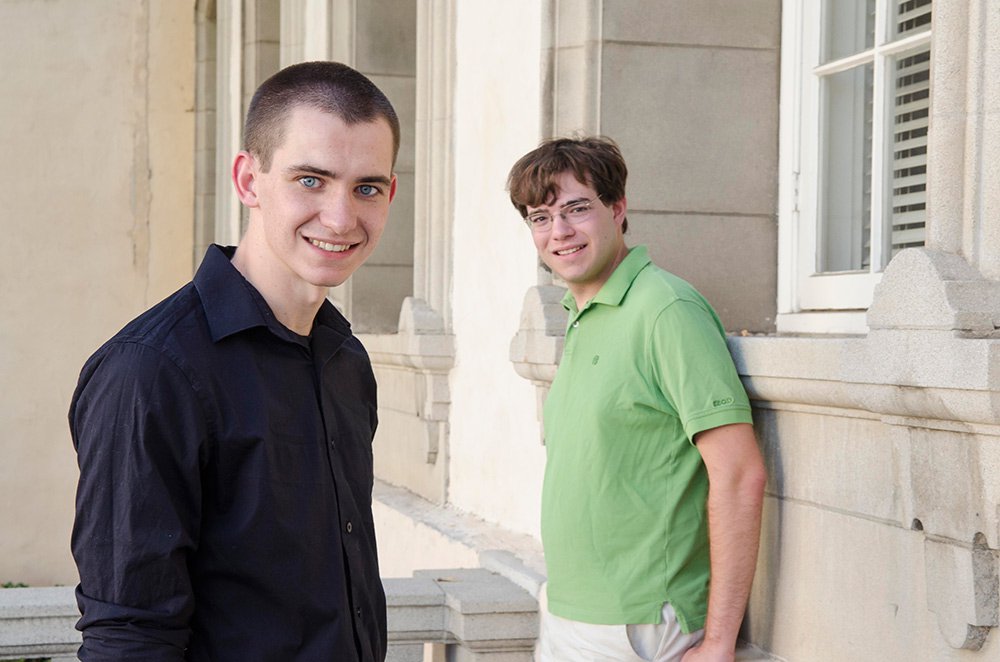