By Earthly standards, Saturn's moon Titan is a strange place. Larger than the planet Mercury, Titan is swaddled in a thick atmosphere (it is the only moon in the solar system to have one) and covered in rivers and seas of liquid hydrocarbons like methane and ethane. Beneath these is a thick crust of water ice, and beneath that may be a liquid water ocean that could potentially harbor life.

Now, decades of measurements and calculations have revealed that Titan's orbit around Saturn is expanding—meaning, the moon is getting farther and farther away from the planet—at a rate about 100 times faster than expected. The research suggests that Titan was born much closer to Saturn and migrated out to its current distance of 1.2 million kilometers (about 746,000 miles) over 4.5 billion years.

The findings are described in a paper that appears in the journal Nature Astronomy on June 8.

"Most prior work had predicted that moons like Titan or Jupiter's moon Callisto were formed at an orbital distance similar to where we see them now," says Caltech's Jim Fuller, assistant professor of theoretical astrophysics and co-author on the new paper. "This implies that the Saturnian moon system, and potentially its rings, have formed and evolved more dynamically than previously believed."

To understand the basics of orbital migration, we can look to our own moon. Earth's moon exerts a small gravitational pull on the planet as it orbits. This is what causes tides: the moon's rhythmic tugs cause Earth's oceans to bulge from side to side. Frictional processes inside the earth convert some of this energy into heat, distorting the earth's gravitational field so that it pulls the moon forward in its orbit. This causes the moon to gain energy and gradually move farther away from the earth, at a rate of about 3.8 centimeters per year. This process truly is gradual, though; Earth will not "lose" the moon until both the earth and moon are engulfed by the sun in roughly six billion years.

Titan exerts a similar pull on Saturn, but the frictional processes inside Saturn are usually thought to be weaker than those within Earth because of Saturn's gaseous composition. Standard theories predict that, because of its distance from Saturn, Titan should be migrating away at a sluggish rate of at most 0.1 centimeters per year. But the new results contradict this prediction.

In the work detailed in the Nature Astronomy paper, two teams of researchers each used a different technique to measure Titan's orbit over a period of 10 years. One technique, called astrometry, produced precise measurements of Titan's position relative to background stars in images taken by the Cassini spacecraft. The other technique, radiometry, measured Cassini's velocity as it was affected by the gravitational influence of Titan.

The results are also in agreement with a theory proposed in 2016 by Fuller, who predicted that Titan's migration rate would be much faster than standard tidal theories estimated. His theory notes that Titan is expected to gravitationally squeeze Saturn with a particular frequency that makes the planet oscillate strongly, similarly to how swinging your legs on a swing with the right timing can drive you higher and higher. This process of tidal forcing is called resonance locking. Fuller proposed that the high amplitude of Saturn's oscillation would dissipate a lot of energy, which in turn would cause Titan to migrate outward away from the planet at a faster rate than previously thought. Indeed, the observations both found that Titan is migrating away from Saturn at a rate of 11 centimeters per year, more than 100 times faster than previous theories predicted.

"The resonance locking theory can apply to many astrophysical systems. I'm now doing some theoretical work to see if the same physics can happen in binary star systems, or exoplanet systems," says Fuller.

The paper is titled "Resonance locking in giant planets indicated by the rapid orbital expansion of Titan." The first author is Valéry Lainey of JPL and the Institut de Mécanique Céleste et de Calcul des Éphémérides (IMCCE) of the Observatoire de Paris. Additional co-authors are Luis Gomez Casajus, Marco Zannoni, Paolo Tortora, and Dario Modenini of Università di Bologna in Italy; Nicholas Cooper and Carl Murray of Queen Mary University of London; Ryan Park of JPL; Vincent Robert of IMCCE and IPSA; and Qingfeng Zhang of Jinan University in Guangzhou, China. The work was funded by the International Space Science Institute, the Italian Space Agency, a Rose Hills Innovator Grant, the Sloan Foundation, the UK Science and Technology Facilities Council, the Scientific Council of the Paris Observatory, and the National Natural Science Foundation of China.

The Cassini mission is a cooperative project of NASA, ESA (European Space Agency), and the Italian Space Agency. JPL manages the mission for NASA's Science Mission Directorate in Washington, D.C. 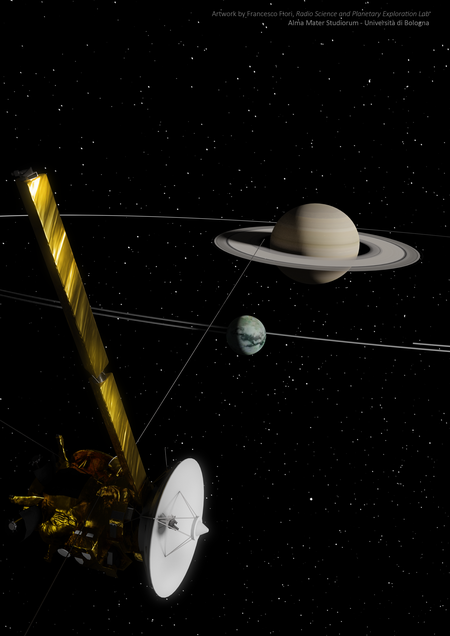