Tipping the Balance of Behavior

Humans with autism often show a reduced frequency of social interactions and an increased tendency to engage in repetitive solitary behaviors. Autism has also been linked to dysfunction of the amygdala, a brain structure involved in processing emotions. Now Caltech researchers have discovered antagonistic neuron populations in the mouse amygdala that control whether the animal engages in social behaviors or asocial repetitive self-grooming. This discovery may have implications for understanding neural circuit dysfunctions that underlie autism in humans.

This discovery, which is like a "seesaw circuit," was led by postdoctoral scholar Weizhe Hong in the laboratory of David J. Anderson, the Seymour Benzer Professor of Biology at Caltech and an investigator with the Howard Hughes Medical Institute. The work was published online on September 11 in the journal Cell.

"We know that there is some hierarchy of behaviors, and they interact with each other because the animal can't exhibit both social and asocial behaviors at the same time. In this study, we wanted to figure out how the brain does that," Anderson says.

Anderson and his colleagues discovered two intermingled but distinct populations of neurons in the amygdala, a part of the brain that is involved in innate social behaviors. One population promotes social behaviors, such as mating, fighting, or social grooming, while the other population controls repetitive self-grooming—an asocial behavior.

Interestingly, these two populations are distinguished according to the most fundamental subdivision of neuron subtypes in the brain: the "social neurons" are inhibitory neurons (which release the neurotransmitter GABA, or gamma-aminobutyric acid), while the "self-grooming neurons" are excitatory neurons (which release the neurotransmitter glutamate, an amino acid).

To study the relationship between these two cell types and their associated behaviors, the researchers used a technique called optogenetics. In optogenetics, neurons are genetically altered so that they express light-sensitive proteins from microbial organisms. Then, by shining a light on these modified neurons via a tiny fiber optic cable inserted into the brain, researchers can control the activity of the cells as well as their associated behaviors.

Using this optogenetic approach, Anderson's team was able to selectively switch on the neurons associated with social behaviors and those linked with asocial behaviors.

With the social neurons, the behavior that was elicited depended upon the intensity of the light signal. That is, when high-intensity light was used, the mice became aggressive in the presence of an intruder mouse. When lower-intensity light was used, the mice no longer attacked, although they were still socially engaged with the intruder—either initiating mating behavior or attempting to engage in social grooming.

The researchers could also use the light-activated neurons to stop the mice from engaging in particular behaviors. For example, if a lone mouse began spontaneously self-grooming, the researchers could halt this behavior through the optogenetic activation of the social neurons. Once the light was turned off and the activation stopped, the mouse would return to its self-grooming behavior.

This seesaw circuit, Anderson and his colleagues say, may have some relevance to human behavioral disorders such as autism.

"In autism," Anderson says, "there is a decrease in social interactions, and there is often an increase in repetitive, sometimes asocial or self-oriented, behaviors"—a phenomenon known as perseveration. "Here, by stimulating a particular set of neurons, we are both inhibiting social interactions and promoting these perseverative, persistent behaviors."

Studies from other laboratories have shown that disruptions in genes implicated in autism show a similar decrease in social interaction and increase in repetitive self-grooming behavior in mice, Anderson says. However, the current study helps to provide a needed link between gene activity, brain activity, and social behaviors, "and if you don't understand the circuitry, you are never going to understand how the gene mutation affects the behavior." Going forward, he says, such a complete understanding will be necessary for the development of future therapies.

But could this concept ever actually be used to modify a human behavior?

"All of this is very far away, but if you found the right population of neurons, it might be possible to override the genetic component of a behavioral disorder like autism, by just changing the activity of the circuits—tipping the balance of the see-saw in the other direction," he says.

The work was funded by the Simons Foundation, the National Institutes of Health and the Howard Hughes Medical Institute. Caltech coauthors on the paper include Hong, who was the lead author, and graduate student Dong-Wook Kim. 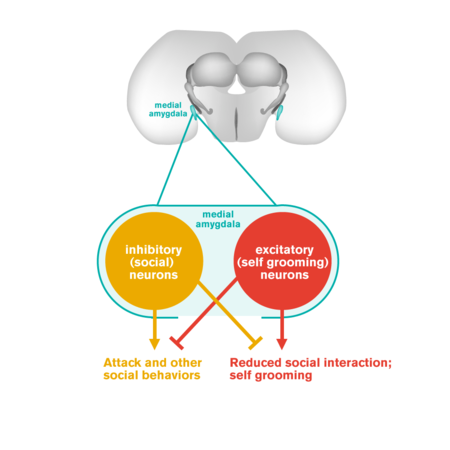 An illustration of the seesaw circuit, showing an antagonistic relationship between the "social" neurons and "asocial" neurons in the mouse amygdala. Credit: Lance Hayashida/Caltech Office of Strategic Communications
Image Lightbox 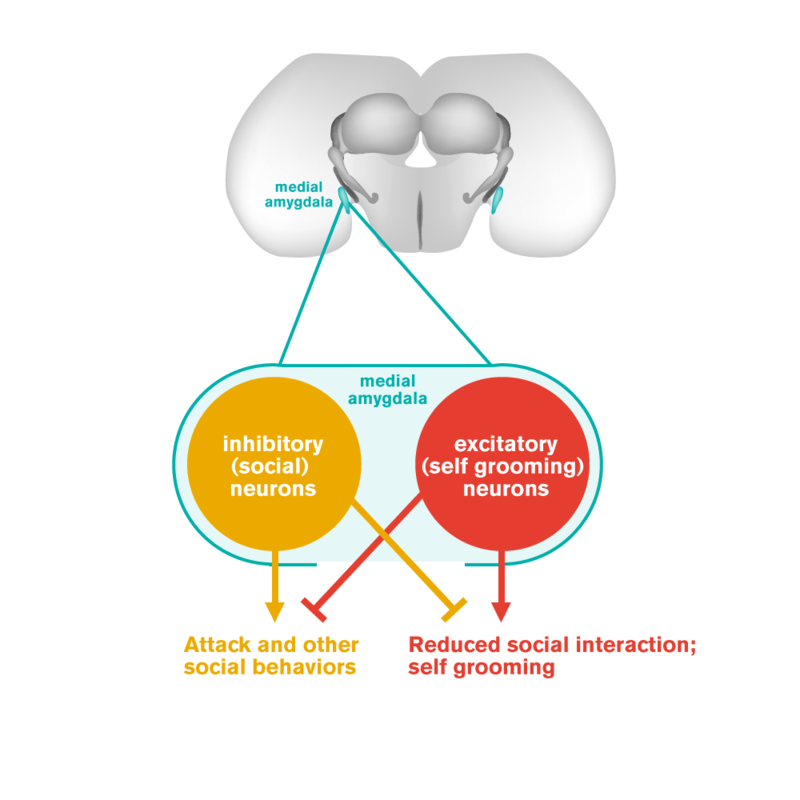 An illustration of the seesaw circuit, showing an antagonistic relationship between the "social" neurons and "asocial" neurons in the mouse amygdala.
Credit: Lance Hayashida/Caltech Office of Strategic Communications
Download Full Image
Subscribe
The Caltech Weekly