Researchers led by mineralogist Chi Ma have identified three new minerals in a tiny sample of the Khatyrka meteorite. The meteorite, recovered in pieces from the Koryak Mountains in eastern Russia in 1979 and 2011, made news in recent years for containing the first three natural quasicrystals ever found. (A quasicrystal is a phase of solid matter with symmetries previously thought to be impossible).

Ma, the director of the Geological and Planetary Sciences division's Analytical Facility at Caltech, and his colleagues have discovered 35 new minerals to date, including 32 in meteorite samples. Out of more than 5,000 known minerals approved and cataloged by the International Mineralogical Association, which confirms new minerals, about 430 are from meteorites—meaning that Ma can be credited with discovering roughly 7 percent of the minerals sourced from meteorites.

The new minerals—dubbed "stolperite" (after Edward Stolper, the William E. Leonhard Professor of Geology and Caltech's provost); "hollisterite," in honor of Princeton geologist Lincoln Hollister (PhD '66); and kryachkoite, for Valery Kryachko, who discovered the original samples of the Khatyrka meteorite in 1979—contribute to the nascent field of nanominerology, the study of rock samples at nanoscales.

Nanomineralogy usually uses a technique called high-resolution analytical scanning electron microscopy (SEM), in which a beam of high-energy electrons is focused onto a polished sample's surface. Various emitted signals, produced from the interaction of the electrons and atoms in a sample, allow scientists to observe the mineral down to a 1-nanometer resolution and to analyze its chemical composition and crystal structure at a submicrometer scale.

The newly dubbed stolperite—so named in recognition of Stolper's "many fundamental contributions to petrology and meteorite research, and support for natural quasicrystal research," Ma says—is an alloy of metallic aluminum and copper (chemical formula: AlCu). Structurally, stolperite is arranged in a cubic form, with each copper atom at the center of a cube with aluminum atoms at all eight corners (and, likewise, each aluminum atom sits at the center of a cube of eight copper atoms).

"Normally we don't observe such aluminum-rich metal in space rocks because the aluminum would have reacted to form aluminum oxide," Ma says. This means that the likelihood of finding other stolperite samples is low. In fact, the Khatyrka meteorite is the only meteorite ever found that contains metallic aluminum; the meteorite fragment hosting the trio of new minerals is now in the holdings of the Smithsonian Institution National Museum of Natural History, which maintains a catalog of more than 600,000 specimens.

The three new minerals and names have been confirmed by the Commission on New Minerals, Nomenclature and Classification of the International Mineralogical Association, which was established in 1959. To name a new mineral, a researcher must demonstrate that its chemical composition and crystal structure make it unique. A few months ago, Ma also had a mineral named in his honor, an aluminum-titanium-oxide mineral (Al2Ti3O9) called machiite by Sasha Krot at the University of Hawaii, was also found in a meteorite. This one formed by condensation in the solar nebula, making it one of the oldest solids to have formed in the solar system.

Ma's paper announcing the minerals is titled "Hollisterite (Al3Fe), kryachkoite (Al,Cu)6(Fe,Cu), and stolperite (AlCu): Three new minerals from the Khatyrka CV3 carbonaceous chondrite." Other co-authors on the paper are Chaney Lin and Paul Steinhardt (BS '74) from Princeton University, and Luca Bindi from University of Florence in Italy. This research was carried out at the Caltech GPS Division Analytical Facility, which is supported, in part, by National Science Foundation grants. 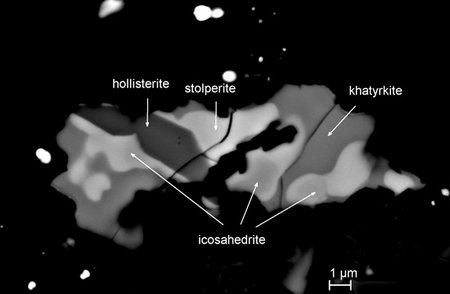 The new minerals were found in a tiny fragment of the Khatyrka meteorite, seen here in a backscattered electron image. Credit: Chi Ma/Caltech
Image Lightbox 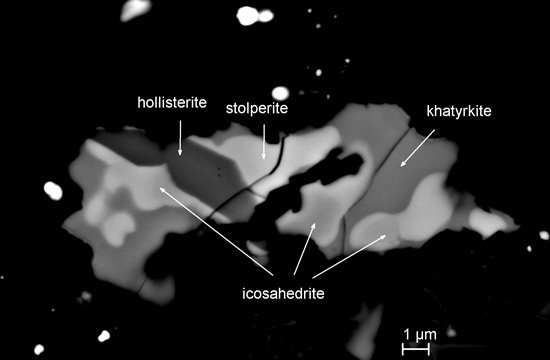 The new minerals were found in a tiny fragment of the Khatyrka meteorite, seen here in a backscattered electron image.
Credit: Chi Ma/Caltech
Download Full Image
Subscribe
The Caltech Weekly

Share this
Tags
earth & planetary science
Related Links
Slideshow: Minerals Named After Caltechers   ＞ They Came From Outer Space   ＞ Natural Quasicrystals May Be the Result of Collisions Between Objects in the Asteroid Belt   ＞
See All News   ＞