The Signals that Make Cells Self-Destruct

Most human hearts look nearly identical—muscle cells in the same places, blood vessel structures in the same orientations. Organs such as hearts or stomachs look alike and function the same across individual organisms in a species because cells follow rigorous processes during development that get them precisely where they need to go.

The process of development involves countless steps that must occur in an exact order and fashion. Studying these intricate steps is the focus of the laboratory of Caltech's Angela Stathopoulos, professor of biology. The lab uses fruit flies, which have a 24-hour developmental cycle with significant changes observable almost every minute, as a model system.

A new paper from the Stathopoulos laboratory examines caudal visceral mesoderm (CVM) cells, which will ultimately become muscle fibers in the fruit fly gut. These cells migrate from the back of the developing embryo to the front over the course of six hours—the longest migration distance in all of fruit fly embryogenesis.

The new research identifies the mechanisms that ensure that any wayward, wandering cells will self-destruct through a specific form of cell death called anoikis. Interestingly, resistance to anoikis is a precursor to many types of metastatic cancers. Understanding the pathways that guide healthy anoikis may ultimately provide insight into how cancers metastasize and why they invade certain parts of the body.

"Cell death is a normal, healthy part of development," Stathopoulos says. "The migrating cell has to constantly be making decisions and figuring out if it is in the in the right place in the body. If it's not in the right place, it needs to self-destruct. We have now determined the pathways through which the cell can do this."

The paper appears online in the journal Developmental Cell on June 15. Frank Macabenta, senior postdoctoral scholar research associate in biology and biological engineering at Caltech, is the study's first author.

The CVM cells do not make their long journey through the fruit fly embryo alone. These 40 to 50 cells follow a kind of track that is made up of a different cell type called trunk visceral mesoderm (TVM). TVM cells emit a chemical signal called fibroblast growth factor (FGF), which lets a CVM cell know that it is in the right place.

At the midpoint of their migration, the CVM cells must navigate around a sharp bend in the embryo, which is roughly U-shaped. At this juncture, CVM cells start proliferating in anticipation of soon being at the end of their journey, when it will be time to start building muscle. The problem is, when cells start multiplying, some begin to drift off of the TVM track. Researchers have previously observed that this is the point where these lost cells will undergo anoikis and self-destruct.

CVM cells (white) migrating around a bend in the embryo. When they make this turn, they begin to proliferate and multiply. Credit: F. Macabenta

A gene called hid (short for head involution defective) is responsible for anoikis. When hid is expressed in a cell, the cell will die. In the new work, Macabenta found that CVM cells begin to express hid as they make the turn around the bend in the embryo, but they do not die—unless they fall off of the TVM track.

The team found that this is possible thanks to the FGF signals, which act as the antidote to hid: If a cell falls off of the track and therefore stops receiving FGF signals, it will die; it can stay alive despite hid being expressed as long as it stays on track. In this way, the embryo can make sure that any wayward cells will self-destruct, while properly functioning cells are spared.

Finally, the team also discovered that a particular pathway, called the bone morphogenetic protein (BMP) pathway, controls the timing of when the cells begin to proliferate. BMP signaling initiates just as cells navigate the U-shaped turn, roughly at the midpoint of their migration. It is this signal that allows cells to divide and grow in number.

Cells have an internal "clock," known as the cell cycle, which controls the timing of growth, DNA replication, and cell division (mitosis). The team found that the timing of hid expression is linked to progression of the cell cycle, and when this is disrupted, hid is no longer expressed at the right point during cell migration. BMP signaling is necessary to allow the cell cycle to move forward through mitosis and is therefore also necessary for timing the precise expression of hid, as cells that fail to divide are not able to express hid in a timely manner to eliminate lost cells.

It is crucial that cells are able to have these programmed quality control mechanisms because wayward cells can be damaging to the proper development of the rest of the organism.

"When we removed the hid gene, the cells that came off the track would survive and ultimately invade and disrupt the central nervous system, where they really shouldn't be," Macabenta says. "They aren't on the correct path anymore, so they revert to a kind of 'plan B' where they find some location they have some affinity for. If you look at autopsies of people who have had metastatic cancer, typically the metastasizing cells will go colonize specific places. Our research serves as a system to hopefully understand how this works, how cells go awry and figure out the 'second-best' signals to follow. In future work, we would like to see what other signals or cues the CVM cells are following that lead them to the central nervous system. This could explain why certain types of metastases preferentially colonize other tissues."

The paper is titled "BMP-gated cell-cycle progression drives anoikis during mesenchymal collective migration." In addition to Macabenta and Stathopoulos, former undergraduate Hsuan-Te Sun (BS '20) is a co-author. Funding was provided by the National Institutes of Health and a Baxter Postdoctoral Fellowship. 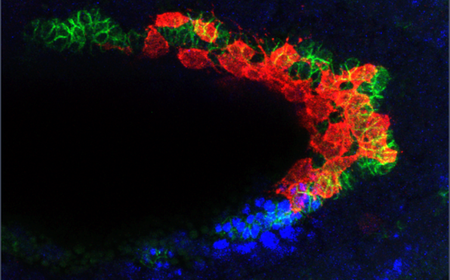 CVM cells (red) follow along a track made of TVM (green) cells. The TVM cells emit a signal, letting CVM cells know that they are going the right direction. The CVM cells are approaching a bend in the embryo where they will encounter high BMP (blue) signals, which will indicate that CVM need to replicate themselves and multiply. BMP signaling also triggers the expression of a "poisonous" gene, called hid, and unless the proliferating cells stick closely to the TVM track, hid will kill them. In this way, the developing embryo performs quality control, ensuring that any wayward cells are eliminated. Credit: F. Macabenta 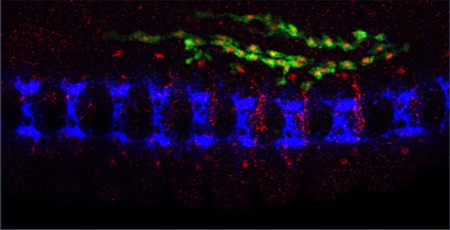 A normally developing Drosophila embryo. The CVM cells (green with red center) stay away from the central nervous system (blue). If they stray too far from their intended path, a cell death gene called hid will kill them. Credit: F. Macabenta 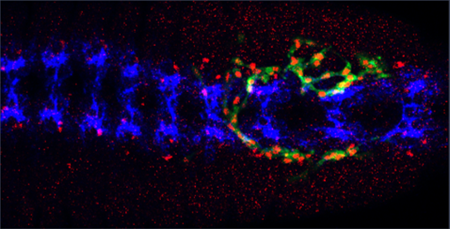 Without hid, CVM cells (green/red) that fall off track and wander throughout the embryo will colonize the central nervous system (blue). This is detrimental for the proper development of the embryo, and this kind of process is often seen in metastasizing cancers. Credit: F. Macabenta
Image Lightbox
Subscribe
The Caltech Weekly